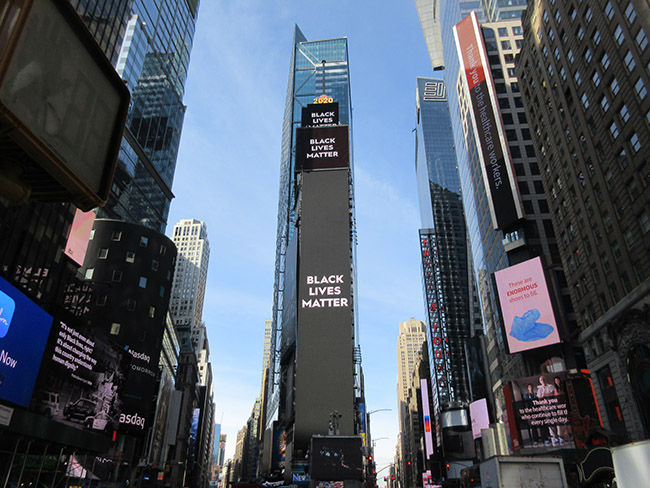 Coca Cola turned off its billboard on Times Square for Blackout Tuesday, a day dedicated to mourn victims of police brutality and reflect on racial injustice.

BandAid finally caught up with the times this week – the 100-year old company announced it would launch bandages in a range of brown skin tones. Like many of the brands joining a wave of public support for the Black Lives Matter (BLM) movement, the announcement fell short.

Shout out to @browndages
BandAid acting like our skin tone just arrived with the new IOS update. That lil clear stuff wasn’t enough cause it still had that big white piece in it. I need to order another box for my travel first aid kit. ✊🏾✊🏾#BlackOwnedBusiness pic.twitter.com/kS2jdwrz0d

A number of U.S. companies and global corporations have publicly taken a stand to support protests against racism and police brutality sparked by the killing of George Floyd in Minneapolis on May 29 – a departure from years past when these same brands typically stayed silent. But these reactive gestures aren’t setting the companies apart like they may have hoped, and instead show that consumers are holding companies to a higher standard than before.

Dozens of companies have taken actions that range from social media posts to new products to more diverse boards. Quaker Oats  is renaming its Aunt Jemima brand, a name born out of racial stereotypes, as is Eskimo Pie ice cream. Levi Strauss & Co. and Gap Inc. have committed to more representation of Black and Latinx people on their boards. NBC announced plans to diversify writers for TV shows.

For companies, it’s clear that they need to go beyond just social media posts to connect with the BLM movement, said Allen Adamson, co-founder of Metaforce, a brand consulting firm in New York. Taking tangible action, however, does not necessarily mean sales will increase. “At the moment, it’s not clear how they will stand out,” Adamson said.

That’s in contrast to when Nike announced an advertising campaign featuring former NFL quarterback Colin Kaepernick in September 2018. Kaepernick, while playing for the San Francisco 49ers in 2016, kneeled during the pregame national anthem as a sign of protest against racial injustice and police brutality. This cost Kaepernick his NFL career, but Nike stuck to its contract with the quarterback.

The company’s share price fell on the news and some customers took to social media to boycott the brand and even burned some of their products. But online sales actually increased significantly more than the same time period the year before in the days following the announcement, according to an analysis by Edison Trends.

“Nike supported the issue at a time when it was not on everyone’s radar and raising awareness mattered,” Adamson said.

For Nike, this was an opportunity to become connected with a cause. But the environment is different today. Brands hoping to have their own Nike moment need to recognize that they are practicing defensive marketing and acting in a reactive, rather than a proactive, way. “Nike moved before BLM became a tidal wave,” Adamson said.

Consumers expect more than just supportive messaging on social media, according to a survey conducted by Morning Consult, a Washington-based market research company. Only 25% of respondents had a more favorable view of brands that supported the protests on social media, whereas over half of the respondents said they have a more favorable view of companies donating to community cleanups after the protests or setting up a fund for small businesses impacted by looting.

Companies though still consider it risky to speak up on politically loaded issues. But the recent wave of BLM support has received support from a wider background of people than in the past. A recent ABC News/Ipsos poll shows that 74% of Americans agree that the killing of George Floyd points to an underlying racial injustice problem.

“Colin Kaepernick taking a knee during the national anthem was polarizing in 2016,“ said Christine Moorman, Senior Professor of Business Administration at Duke University and editor in chief of the Journal of Marketing, but now protesting against racism and police brutality are no longer as polarizing,

Most companies still want to play it safe. More than 80% of brands in a recent survey said they don’t think it’s appropriate for their brand to take a stance on politically charged issues, which is in line with results in recent years, according to the latest CMO survey published on June 16.

“If the issue is political or polarizing by definition, most companies won’t speak up,” said Moorman, who conducts the survey.

Taking the risk to publicly support a cause, as Nike did, could be a way for companies to stand out and boost sales. Of the companies that did take a stance on a political issue, more than 83% said it had a positive effect on attracting and retaining customers and business partners, and 90% said the decision helped their company stand out in the marketplace, according to the survey.

Companies need to commit to a long-term strategy and not just react to the news of the day, Adamson said. “Consumers are too sophisticated to let a brand capitalize on the situation,” he said.