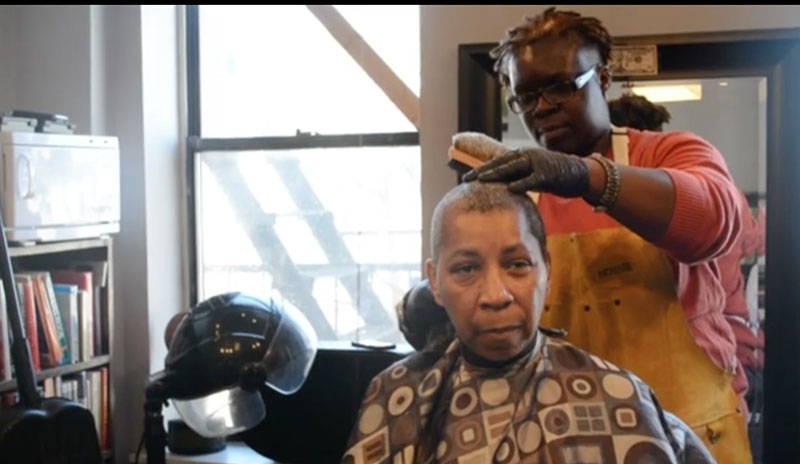 “I had a lot of male barbers that would cut my hair and they would not be into cutting it down really low [short],” said Parker, 55, a landscape photographer and resident of Sunset Park, Queens. “They tried to talk me into keeping it a little longer.”

But Khane Kutzwell, 43, came to the rescue with her barbershop, Camera Ready Kutz that caters to the grooming needs of the LGBT community. On her website, she includes queer, asexual and intersex people to her barbershop in the comfort and privacy of one of her apartment’s bedrooms at Eastern Parkway in Crown Height, Brooklyn.

Parker’s colleague told her about Camera Ready Kutz three years ago and she has been a customer ever since. She even brought her 14-year-old son there after a hair clipper was pressed to tight to his scalp and cut him in a traditional barbershop.

“A lot of barbers tend to put a lot of pressure on the scalp when they were cutting his hair and he didn’t like the experience,” Parker said. “It’s like a dentist, you have to feel comfortable to go on a regular basis.”

They travel 30 minutes to get to Kutzwell’s two bedroom apartment, where one of the bedrooms serves as a barbershop.

Kutzwell started her barbershop in 2007 when her friends in the LGBTQ community complained about the service they received at neighborhood barbershops. For the community, getting a haircut is an irksome experience because they could never get what they wanted.

Kutzwell’s family emigrated from Trinidad and Tobago when she was really young and she grew up in Far Rockaway, Queens. Her upbringing shaped who she is today.

“I didn’t grow up male or female,” she said. “My family just treated me as whatever I presented at the moment.”

“I wake up sometimes and I feel more male than female, sometime more female than male,” she said, “So, I don’t identify as anything in particular, I just let myself be.”

Kutzwell said that she is not the barber for the LGBT community.

“If you look it up on the internet, there are tons of other LGBT friendly barbershops, so I’m not claiming that I’m the only one here,” she said. “But I always try to step up the game through the internet.”

Apart from promoting the business through website and Facebook, she has built a mobile app to make reservation easier for her prospective customers.

Although Kutzwell’s barbershop caters to the LGBT community, her customers include people from all backgrounds, races, gender, sexual orientation, and religion, such as the Orthodox Hasidic Jewish Community in Brooklyn and Muslim women. Her vast range of clientele gives her a boarder sense of different cultures in the world.

“Every culture has their own way of conducting haircut, like the Hasidic Jewish, they don’t want their side to be touched, or Muslim women who would only remove their headscarf in front of the people they trust,” she said. “Those cultural variations always amazed me.”

Apart from offering tolerant service, Kutzwell has many promotional discounts such as her famous “Get A, Get 50 percent off” program for students who get good grades.

“In the end, it’s about supporting your community,” she said.

Kutzwell’s next project will be her own mortar and brick storefront LGBT friendly barbershop in Crown Heights, Brooklyn. She hopes the barbershop will be a place where people can hang out and get their hair and nails done in a nonjudgmental space. Her dream is to have barbers and beauticians, who share her belief of unprejudiced service to the LGBT community, housed in one spot.

“I’m planning on taking a beautician class, so I can take a better care of my clients,” she said. “After all, I’ve always wanted to go back to school and sharpen up my skill.”