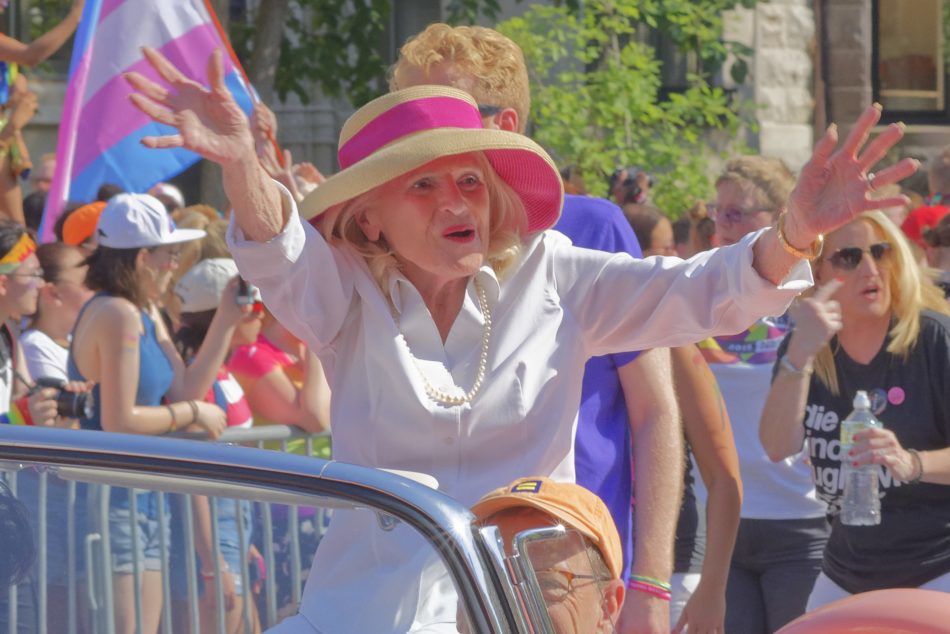 Edith Windsor at DC Pride in 2017. Photo courtesy of Wikipedia

Hundreds of people entered the Temple Emanu-El on yesterday to honor the life and legacy of Edith “Edie” Windsor, a gay icon whose battle for marriage equality led to the legalization of gay marriage.

Mourners held their heads down, sniffled back tears, held hands or embraced loved ones as they entered the funeral service.

“She was just one person, but was able to have this sort of huge ripple effect on the lives of so many Americans, and so many LGBTQ Americans,” said Nick Morrow, who came up from Washington, D.C., to attend the service. Morrow now works with the Human Rights Campaign, but helped with the press team for Windsor’s Supreme Court trial.

Windsor’s quest for equality started in 2009 after her spouse, Dr. Thea Spyer, died of complications from multiple sclerosis. The couple was wed in Canada, but the marriage was not recognized in the United States because of the Defense of Marriage Act (DOMA). Windsor had to pay estate taxes, about $600,000, and knew that was wrong. Her case climbed all the way to the Supreme Court and her victory opened the door to all gay couples being allowed to wed. 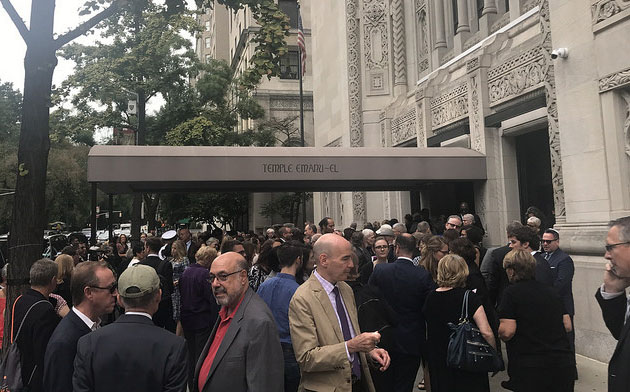 “Her legacy is one of love, and the right that we now have to marry the people we love,” said Rabbi Amy B. Ehrilch at the start of the service. “To have love as your legacy in life, and in law, is an everlasting blessing, which will continue to encourage and shelter generations to come with the freedom inherent in justice and equality.”

Some time after Windsor won her landmark case, Hillary Rodham Clinton came out in support of same-sex marriage. Support of LGBTQ rights was prominent in her failed presidential campaign.

“She helped changed hearts and minds,” said Clinton to the hundreds gathered at the Upper East Side synagogue, “including mine.”

In 2016, Windsor met her “next love,” her widow, Judith Kasen-Windsor.

“How does someone find the words to describe someone as unique and special as Edie?” Kasen-Windsor said to the mourners. “We all know she was a remarkable woman, a leader, a technology pioneer and a civil rights trailblazer who without end gave to those tirelessly around her.”

The couple’s love story was featured in The New York Times.

“To me she was simply my love,” she said. “When I met Edie, I knew the moment I set eyes on her years ago that she was the woman for me.”

Roberta “Robbie” Kaplan, Windsor’s Attorney in her civil rights case, said that for the last eight years Windsor was worried that she did not have long to live.

“After her spouse, Thea Spyer, passed away, Edie had suffered from a series of heart attacks which were diagnosed by doctors as broken heart syndrome — which is a real thing,” said Kaplan. “Indeed, Edie asked me and some of the other lawyers on her team to carry her nitroglycerine tablets with us when we attended events — just in case. Because of her heart condition, I think it’s fair to say, I became completely neurotic about making sure that Edie’s case got decided as quickly as possible.”

Windsor was not only celebrated for being a gay rights pioneer at the service, but for her accomplishments in her profession. Windsor earned a master’s degree in mathematics at New York University and went on to work at IBM. She eventually rose to the highest technical position at IBM as a computer programmer, which was incredibly rare for a woman at the time. After she retired, Windsor was responsible for putting many gay organizations online in the early days of the Internet.

“Always quick to volunteer, not only information but also her time and her energy, and she felt very, very strongly about the issue of ageism in the LGBT community as well as the mainstream community,” said Sandy Warshaw, a close friend.

At the end of the service, Rabbi Sharon Kleinbaum of LGBT friendly Congregation Beit Simchat Torah asked the mourners to stand for the “gay national anthem.” People laughed, and everyone exited to a live rendition of Over the Rainbow.