Life goes on at Ground Zero 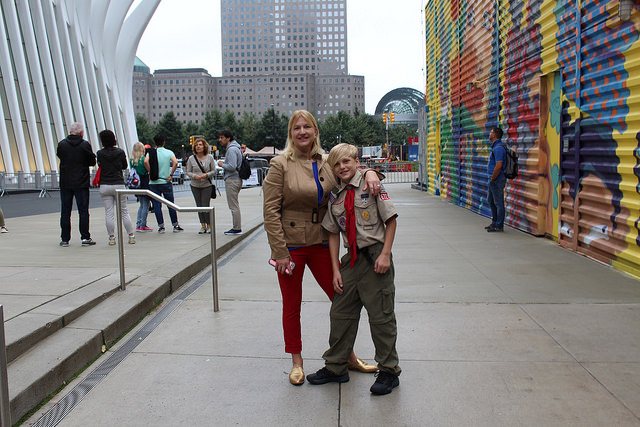 Stasi Dimassis-Benbow (left) and her son, Jake, visit the Memorial Plaza before heading home to Seattle. Photo by Maggie Garred.

The September 11 Memorial Plaza was closed to the public today, the 17th anniversary of the attacks that took almost 3000 lives. But it was business as usual at the site. Businesses were open. New Yorkers walked briskly to work. But a few mourners stopped to remember.

Patti Walsh of Verona, New Jersey, worked in Lower Manhattan near Ground Zero on that fateful day 17 years ago. She purposefully visits the 9/11 Memorial and anniversary ceremonies to mark and set the day apart.

“The Oculus still feels odd to me, that that sight is a shopping mall essentially,” said Walsh. “There’s part of me that salutes New Yorkers for their resilience because life does go on and that’s how we honor their memory, by going on with our own lives. At the same time, this is a day, that isn’t business as usual.” 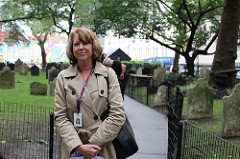 Others felt the same. They believe the anniversary should be set apart, especially given the families and those who gather at what they know to be more of a gravesite than a memorial.

Among the crowd, Annette Maxey, 54, of Brooklyn, came to remember her aunt who worked at the South Tower. Maxey regularly comes to honor her aunt because her aunt’s remains were not recovered.

Tourists were also present. Stasi Dimassis-Benbow, 48, of Seattle and her son, Jake Benbow, 11, were in New York because Jake walked in New York Fashion Week. But today, Jake wore his Class A Boy Scout uniform. They originally planned to fly home on September 10th, but Jake recognized the date and asked to stay to pay his respects at the Memorial.

“I want to show the bad people that we’re not afraid, that my generation isn’t afraid,” Jake said. Dimassis-Benbow said that her son wanted to fly home on September 11th, as a statement of resilience.

Dimassis-Benbow said that the markets and tourism were a sign of rising out of tragedy.

“It shows we have won,” said Dimassis-Benbow. “We all pay our respects in a certain way. We all have to keep living. We have to live our lives to keep showing we are free.” 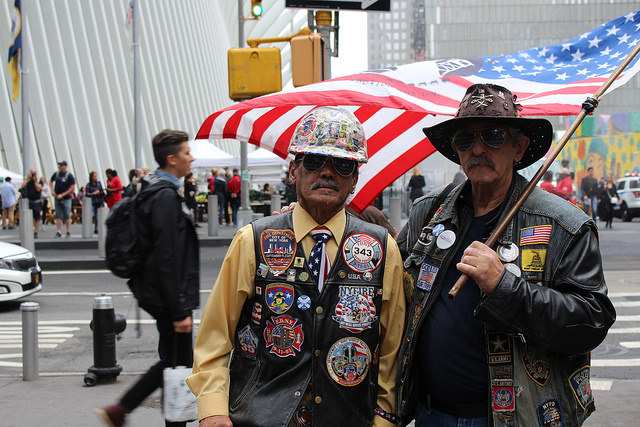 Jose Coola (left) and Gary Gone stand in solitude with  9/11 families who mourn across the street at the Memorial Plaza for the anniversary of the 9/11 attacks. Photo by Maggie Garred.

Gary Gone, 64, of the Bronx, and 9/11 first responder Jose Coola, 67, of New York City, stood on a busy sidewalk across from the Oculus open-air market surrounded by passing tourists and businessmen and women.

They held an American flag as a tribute to the dead.

“Today, that market shouldn’t even be over there,” said Gone. “It’s disrespectful.”

A moment passed and a construction worker walked  briskly toward the men. In his hand was a silver trumpet. He stopped took his stance and performed taps, facing the Oculus and Memorial Plaza.

“We come down here to show the families that we didn’t forget about them,” Gone said. “Today is the day, take time and remember.”

Wonderful article! Remembering the day and the lives snuffed out.