Life jackets symbolize the plight of refugees in Brooklyn display 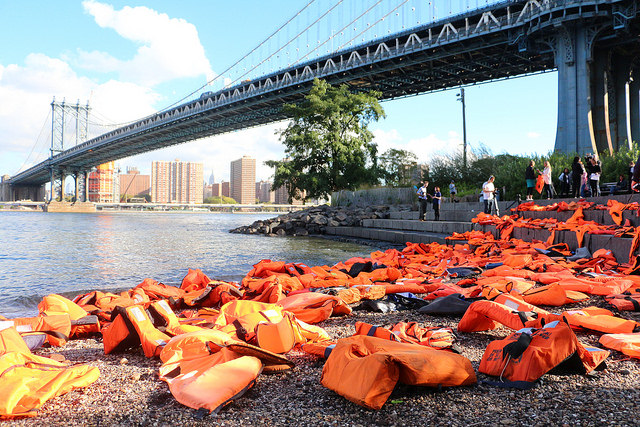 Oxfam America, a global organization that addresses poverty, hunger and injustice arranged used refugee life jackets on Pebble Beach at Brooklyn Bridge Park. The display was on the eve of two United Nations summits that will deal the refugee crisis. Photo by Julie Liao

Scattered on Pebble Beach at Brooklyn Bridge Park, just under the Manhattan Bridge, were 400 worn refugee life jackets. One hundred of them were worn by refugee children. Some of them were ripped up and covered in dirt. Some of the refuges who wore them did not survive. The life jackets were collected from the beaches of Chois, Greece, where refugees from war torn countries struggle to make it to their shores. These tattered life vests were what they wore.

Most of these refugees came from Syria, Turkey, Iraq and Afghanistan. The conflicts, civil war and terrorism threat in the Middle East drove them to flee their homes.

But today, these life jackets stood as a symbol on the eve of United Nations Summit for Refugees and Migrants and Leaders’ Summit hosted by President Obama at the United Nations Headquarters.
The jackets were a symbol of hope, remembrance and action.

Oxfam America, a global organization focusing on addressing poverty, hunger and injustice issues, came up with an idea of displaying the life jackets to catch the attention of global leaders and as a call for action against global refugee issues.

Marissa Ryan, 32, advocacy and campaigns manager of Oxfam Ireland, saw theme as a testimony to the thousands of refugees who died while seeking refuge.

“If you look closely, the tiny life jackets belonged to babies who drowned, which is continuing year and year in the absence of any coherent or sane response to global migration from world leaders,” she said.

According to a report by the UN Refugee Agency, 65.3 million people were displaced at the end of 2015, which was the highest number since World War II.

After today’s event, the collection will be sent to the United Kingdom, to bring attention to this worldwide crisis.

Lauren Hartnett, 32, the humanitarian press officer of Oxfam America, unpacked these jackets on Pebble Beach with her colleagues in the early morning. She said there were 300 jackets for adults and 100 for children. Although some of them were not very sturdy the refugees had used them to cross the sea.
“Some of them were tied together. You can tell (they were) from families that didn’t want to get separated,” she said.

Bogdan Krasic, 28, a Serbian researcher of Belgrade Center for Human Rights, helps refugees who seek asylum in Serbia and other countries. Serbia, serves as an intermediate transition on the road from Middle East to Germany or Austria.

Krasic said the majority of refugees were less educated, non-English speaking and even disabled.
While the number of displaced people has hit new records, Ryan pointed out that, the six richest world economies only accommodated nine percent of the global refugee population.

Krasic thought the most developed countries were very careful about accepting refugees. They resettled some refugees because of longstanding policies, but not because they truly cared.
As the largest economy in the world, the U.S. has always been expected to play the most significant role in solving this problem.

But the U.S. government has resettled 79,560 refugees, not enough according to Krasic and Hartnett.

“I mean we’re always wanting more,” said Hartnett. “Especially Obama is hosting the summit on Tuesday. So we’re hoping for a huge announcement.”

But the presidential election has greatly impacted refugees who have already lived in America and those who are eager to settle down in this country. While Hillary Clinton fully supports Obama administration’s plan to accept more, Republican nominee, Donald Trump wants to temporarily ban Muslim immigration.