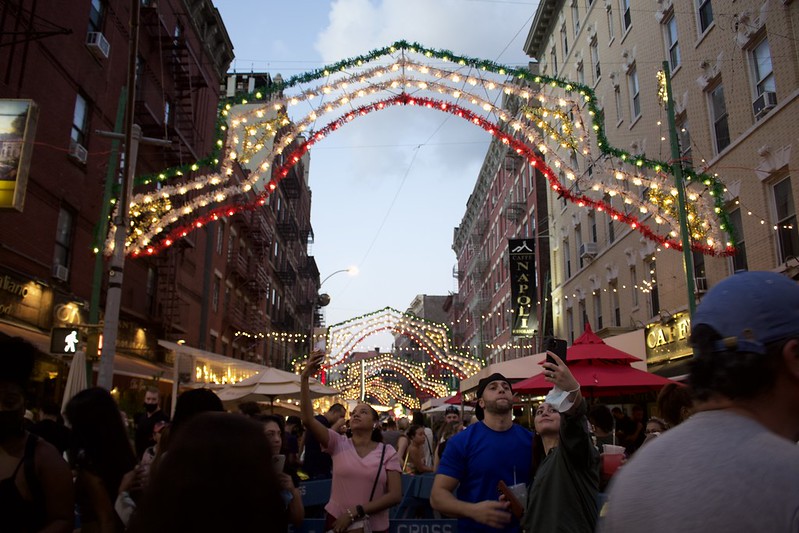 Hundreds of vendors and visitors pack Mulberry Street during the Feast of San Gennaro in Little Italy. Photo by Maggie Geiler

Streets, sidewalks, and restaurants lining Mulberry Street were overflowing with hundreds of unmasked people for the return of Little Italy’s 95th annual Feast of San Gennaro. The pandemic cancelled last year’s festival but many of the festival goers yesterday were young, unmasked, and unafraid of catching the virus.

“This is my first time coming on a Saturday and it happens to be after the… it’s really not after – we’re still in the pandemic, but I guess after mass vaccination, so I’m actually quite surprised to see how many people are here,” said Eric Johnson, 32, of Harlem  ”

Johnson said he isn’t scared to be around a large group of people since he is vaccinated.

“We’ve been risking it all for a while,” said Johnson. “I mean, you know, I’m not scared. I was vaccinated back in April. Nothing’s happened since then. I ride the trains. This is a little different for me though, I’ve never been in this type of crowd for quite some time, but I am hoping for the best. I think we’ll be alright.”

Anna Delgado, 62, from Queens said she was a regular at the San Gennaro Feast. She also felt safe in the large group due to the vaccination rates in Little Italy.

“Some people, they are aware of the pandemic,” said Delgago. “They use masks, but I think around 70 percent of the people over here, they already had the vaccination. That’s very good for New York.”

With hundreds of people unmasked in such close quarters, the feast does have the potential to  be a super spreader event as fully vaccinated people are still getting infected with Covid.  The vaccine card and mask mandates  are not required for outdoor events.

But the crowds who walked around eating cannolis and smoked sausages were not afraid and neither were the vendors hawking the food.

“It doesn’t matter because we’re all outside, “ said Angelique Aquilino, 36, a pastry stand owner.  “We can do whatever we want to do, and everybody’s happy.”

Not every vendor was comfortable with the crowds. 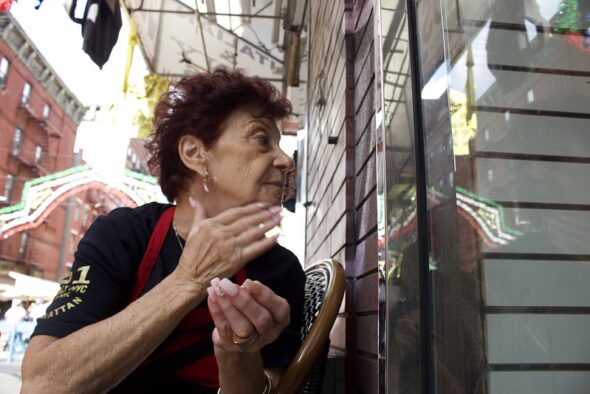 Josephine Caso, sister of the owner of Cafe Napoli, checking her reflection in a window at the Feast of San Gennaro in Little Italy. Photo by Maggie Geiler

“I tell you I’m a little leery,” said Josephine Caso, 85, sister of the owner of Café Napoli. “Thank God that everybody’s healthy, [my family and I] all got our shots, we’re happy to be back.”

Caso and her family handed out cannoli’s, almond-filled pastries, and zeppole to customers waiting in long lines, some for up to 45 minutes. With much of Little Italy’s income being dependent on tourism, the tight-knit community was hit hard by the pandemic, causing most restaurants to lay off staff members and some to deal with closing.

“Forget it, forget it, it was a disaster,” said Caso “I’ll tell you the truth, I was scared. We had the place closed for a year and a half, nobody walked the streets. It was very hard.”

Business owners hoped the feast would be the boost neighborhood businesses would need.

“With the whole festival going on, hopefully it boosts everything back up, said Manuel Siguencia,37, the manager  at Il Cortilo restaurant. “All of Little Italy is packed… it’s so awesome.”

And the 11-day festival was exceeding their expectations.

“We were afraid that it wouldn’t be like this coming back,” said Aquilino. “It’s like nothing ever happened. Like we just fell asleep and woke up and we’re back where we were. Everyone is back. This neighborhood needed this.”