Living with HIV/AIDS: Bush and AIDS 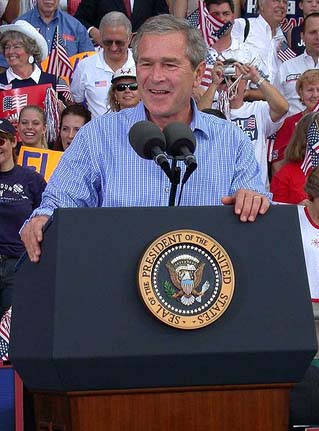 During the month of December, visitors to 1600 Pennsylvania Avenue are greeted by a red AIDS ribbon adorning the North Portico of the Bush White House, boldly staring down any doubters of one of the current administration’s focuses.

“Thirty-three million people around the world are living with HIV, including more than one million Americans,” said President Bush from the North Lawn of the White House on World AIDS Day this year. “The ribbon is a symbol of our resolve to confront HIV/AIDS and to affirm the matchless value of every life.”

Meant as an unabashed display of federal commitment to the fight against a devastating pandemic, the ribbon instead presents a contradictory memory of the last eight years, with the new White House décor an empty gesture from President Bush on the issue of AIDS in the U.S.

With the 20th anniversary of World AIDS’ Day on Dec. 1 paralleling the wrap up of the current administration’s two-term reign, critics have cited the Bush administration’s fight against the disease as more of a show than real action. AIDS instances on the incline in recent years, not enough effort has been put toward keeping HIV/AIDS awareness in the public spotlight, as well as more accessible funding for at-risk regions and useful prevention methods like sex education.

“AIDS has once again become a silent killer,” said Dr. Bill Thierfelder, an English professor at Dowling College in Oakdale, L.I., who has taught a course at Dowling College on the AIDS pandemic for the past 11 years. “It’s not considered the crisis it once was, hence infection rates in every age group is on the increase since Bush heisted the election in 2000.”

The money spent toward AIDS tells another tale. Since taking office in 2001, the administration has granted $99 billion to treatment and care for individuals living with HIV or AIDS here in the United States. Funds topping $20 billion have also been allocated to research on HIV/AIDS prevention and treatment within this country. Just in the 2009 budget alone, the current administration requested $93 million for the Centers for Disease Control and Prevention’s HIV Testing Initiative.

Dr. Lorraine Ronca, who works in the emergency room of Montefiori Hospital in the Bronx, a borough hit hard by the AIDS crisis, said that there have also been incredible advancements under President Bush’s watch, a credit to the administration.

“I grew up in the generation that was at the brink of AIDS. We’ve seen tremendous progress,” she said.

Dr. Ronca highlighted the near elimination of mother-to-child transmission during pregnancy and remarkable growth in prevention and treatment.

But with an October 2008 report by the CDC indicating 1,106,400 people living with the HIV infection in the U.S. at the end of 2006  – African Americans, Hispanics, and homosexual and bisexual men in particular – some still feel that not enough has been done.

“It’s totally political. There’s a deep rooted religious agenda that does no service to anyone,” Dr. Thierfelder said. He has been involved in AIDS activism on Long Island, New York and Manhattan since 1994.

A critical piece of legislation benefiting the AIDS community has been the Ryan White CARE Act. According to Kaiser State Health Facts, the Ryan White Program, which was enacted 18 years ago, was designed to provide funding to cities, states, and other public or private nonprofit entities to enable the delivery of health care and support services to those affected by HIV, previously ignored medically.

The program was reauthorized for the third time in December 2006. With the reauthorization came modifications that AIDS advocates have argued made it more difficult to provide organizations with sorely needed funding.  Dr. Thierfelder said these revisions cost Long Island and New York $21 million.

“They might have meant well, but so much more could have been done,” said Chuck Stutz, 45, of Las Vegas, Nev. who is HIV positive. “I was very happy when in his second term he signed the bill on AIDS in Africa…and then I read the stipulations. Once again, instead of helping people and focusing on common concerns (saving people), we bow to the religious right.”

Despite the fact that it has been scientifically proven that condoms are effective in preventing sexual transmission of HIV, the federal government has still continued to fund abstinence until marriage programs. More than $1 billion have been spent in the last five years to fund these types of programs, such as Adolescent Family Life and the Abstinence Education Formula Block Grant Program.

This discrepancy that those within the AIDS community have had with President Bush’s labors are more easily recognized within the U.S. President’s Emergency Plan for AIDS Relief (PEPFAR), the U.S.’s global efforts on AIDS. A major theme espoused by PEPFAR has been the education of children, and their importance in encouraging a brighter and healthier future for the world.

Yet in the last eight years abstinence has been established as the preferred “life skill” for the world’s youth to learn, even though knowledge of proper condom use is critical.  Currently 17 states, including California, New York, and Virginia, reject federal funding that promote adherence to an established eight-point definition of abstinence-only-until-marriage education.

“We’ll give you money, but only if you do it this way,” said Stutz. “Abstinence is not going to stop this epidemic.”

Drug abuse also continues to play a large role in the rise of HIV/AIDS. Injection drug users alone make up 36 percent of U.S. AIDS cases since the 1980s. The administration responded with support for the Targeted Capacity Expansion Program for Substance Abuse Treatment and HIV/AIDS Services grants by the Substance Abuse and Mental Health Administration. These funds assist providers in underserved areas with conceded budding substance abuse issues.

In addition, President Bush has remained a steadfast proponent of routine HIV testing, the White House reported that one in five people living with HIV in America are unaware of their status as an infected person. Bush’s position has been one source of unease for AIDS activists who support voluntary testing.

Lambda Legal, the leading legal defense organization for lesbian, gay, and HIV related civil rights matters, and others worry that mandated testing wouldn’t be carried out with compassion.  They want emphasis placed on finding appropriate resources for those who test positive and readily-available counseling.

“When a person contracts HIV, especially if they’re gay, a drug addict, or a prostitute, the immediate response by many is it’s their own fault. They asked for it,” Thierfelder said. “Meanwhile the person who smokes and gets lung cancer gets the kid gloves and understanding.”

Stutz cited further education as being key to unlocking the mystery surrounding AIDS both here and abroad.

“There are people in this country that actually still think you can get it from a toilet seat,” he said.

But Stutz identified himself as one of the lucky ones. He said that since learning of his diagnosis, he has embraced living by the “crystal ball theory”—now that he understands what the eventual last chapter of his life may hold, Stutz has the opportunity to cherish the times he has now.

“I always thought there was a possibility, and was just too scared to confirm,” Stutz said of his decision to be tested.

All that is left is relishing every moment while you can, he said.

Wow man, that is really good info, thanks.