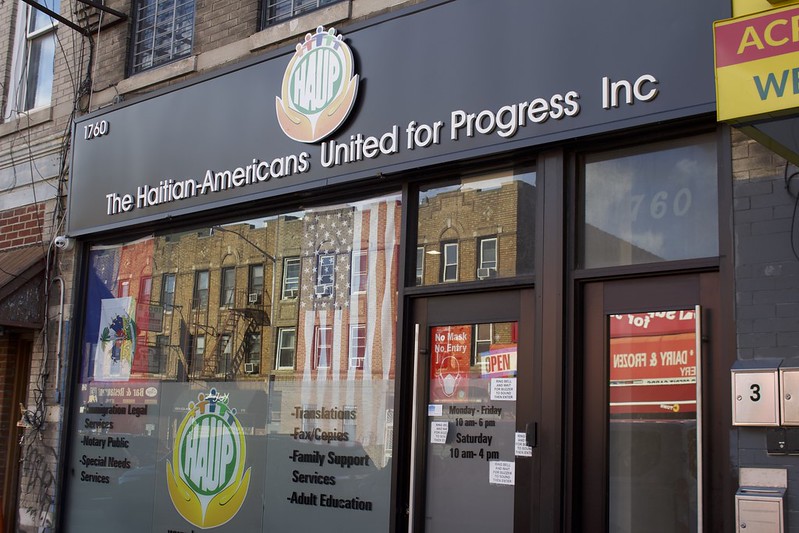 Before 14,000 Haitian immigrants arrived at the southern border of the United States this past week, Haitian Americans United for Progress was significantly exceeding its quota for providing immigrant services. Now, thousands of asylum seekers who were not forced onto deportation flights are looking to build lives in the United States, and HAUP is preparing to stretch its already thinly-spread resources even further.

Both federal and city governments have asked the organization to initiate a resettlement project to support the growing influx of Haitian immigrants, according to HAUP’s Executive Director Elsie Saint-Louis.

Haitian Americans United for Progress has been serving the New York City immigrant community for 46 years. It began in 1975 as a volunteer-based organization responding to the needs of those derided as “boat people”: Haitian refugees.

“What prompted the formation of this organization was the first wave of Haitian refugees,” said Herold Dasque, Community Liaison for HAUP. “They called Haitians the boat people, and they were not received well.And now in 2021.We still have political unrest, economic trouble, and bad policies from Haiti’s government and from the US.”

In response to this turmoil, HAUP provides completely free immigration, education, training, medical and special needs services to those in its community. 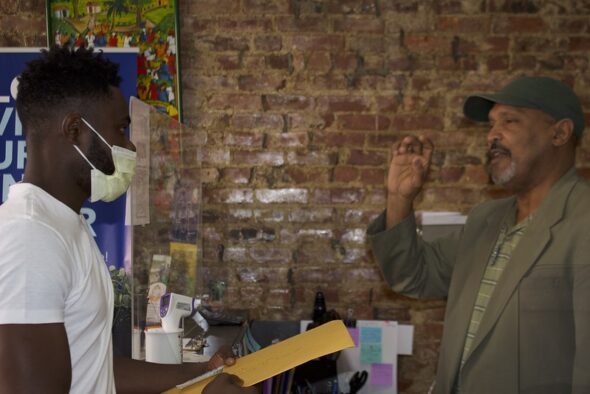 Herold Dasque, right, explains the process of applying for TPS and receiving a social security card to Stanley, an undocumented Haitian immigrant. Photo by Annie Iezzi

Smiling and gesticulating, he explained to a young man, Stanley, how the process would work. He needed to sign off on his demographic information, which Dasque would seal and file with the dozens of other TPS forms awaiting mailing. HAUP covers all legal fees for its immigration services, but it cannot cover the $545 governmental price for each immigrant between the ages of 14 and 65 that it aids in application.

This poses a significant price barrier to many Haitian immigrants, who are fleeing, among other conditions, extreme poverty in their home country. Eventually, Dasque told him, Stanley will receive a social security card and the full governmental services that are benefits of TPS.

In May of 2021, the Secretary of Homeland Security announced an 18-month designation of TPS for Haitian Nationals, citing “serious security concerns, social unrest, and an increase in human rights abuses, crippling poverty, and lack of basic resources.”

Now, those problems have only been exacerbated by a 7.2 magnitude earthquake that devastated the small country on August 14th, decimating homes, churches, and businesses. This blow followed the July assassination of Jovenel Moïse, Haiti’s president, which caused massive social unrest.

But according to the Homeland Security website, immigrants to the United States who left Haiti after May 21, 2021 are not eligible for TPS and are at risk of repatriation. According to UNICEF, more than two in three Haitian migrants that have been repatriated are women and children.

“When you have crisis upon political crisis that is creating insecurity, then you have natural disasters, a big storm, a big cyclone and within a decade two major earthquakes that destroy your country, this is expected,” said Dasque, shaking his head.

He asserted  that the surge of Haitian refugees at the border is one that has been years in the making.

“Everyone knew they were flying to Chile, Brazil, Ecuador, Venezuela, Panama, you name it,” Dasque said. “And they end up travelling from Chile all the way to the border of the US.”

Those arriving in the U.S. have been camping under the international bridge that connects Del Rio in the United States to Mexico. While these migrants have not yet reached New York, HAUP has already seen an uptick in TPS applications. Dasque sees himself in some of the migrants who come in search of legal aid, both Haitians and non-Haitians alike.

“I came involuntarily,” he said. “I was very young and didn’t want to leave under the dictatorship. For four years I was here without papers…I always feel a connection with those who are undocumented. In 1994, I became a citizen; that’s a personal choice. At that time, a lot of Haitians didn’t want to become citizens because there is a mentality that they ‘don’t want to be Black twice,’ not in this country.”

The inhumane treatment of Haitian migrants at the border prompts some at HAUP to be skeptical of the White House’s statement that President Biden is working to develop a “humane immigration system.”

“We have been fighting forever for a path to citizenship and a path to legalization,” said Saint-Louis. “I wouldn’t mind putting all of my efforts into a real move toward immigration reform, but I just don’t see it. I’m honestly not sure what humane immigration would look like.”

Now, as it has since its founding, HAUP strives to provide comprehensive services to the community of primarily Haitians that it supports. In addition to delivering crucial immigration aid, HAUP has been organizing vaccine drives and boosting information about the Excluded Workers Fund to help community members thrive.

Behind their community-facing smiles, processing the brutalization of Haitians already fleeing a country in distress weighs heavily on the leadership.

“The luxury lacked by people like myself is the time to process things,” said Saint-Louis.