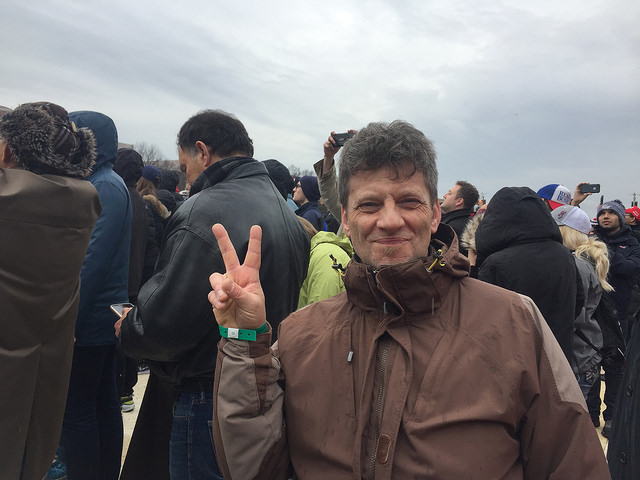 The overflow areas went unused. White plastic temporary flooring intended to be filled with supporters extended well past the last person in attendance. The inauguration of President Donald Trump yesterday did not live up to the hype.

“I was shocked at how empty it is here,” said Sami Mehta, 18, a Dartmouth student who stopped by to see the inauguration in person.

Though the crowd was unimpressive in number, that didn’t detract from the excitement his supporters felt on the first day of his presidency.

Don Krogman, 55, from West Babylon, New York lost his job at Victoria’s Secret, and has been out of work for a year and a half. He calls himself a “forgotten 55-year-old”, left behind by a changing society.

“When you hear, ‘you’re bigoted, you’re a racist, you’re an idiot for voting—.’ How does that make you feel? I turn around and say, ‘I’m gonna do it again next year,’” he said.

A lifelong Democrat, Krogman became an Independent after 9/11. His distrust of government and need for change, drove him to Trump.

“I would’ve voted for [Bernie] Sanders until we found out that the Democrats don’t believe in democracy and selected Hillary [Clinton] to be their champion,” he said.

Halfway between the Capitol and the Washington Monument the crowd thinned out. It was a vastly different scene than 2009, when the crowd spilled into the overflow areas, filling the National Mall for Obama’s first inauguration. Early estimates judge the Trump inauguration to have attracted one-third of the crowd of Obama’s. Many of the best seats at the inaugural parade were empty.

Bridget Begdin of just outside Denver, Colorado, said Trump was her ideal candidate.

“I think everybody’s energized and excited about the new direction of our country,” she said. “Everyone is hopeful, there’s excitement.” 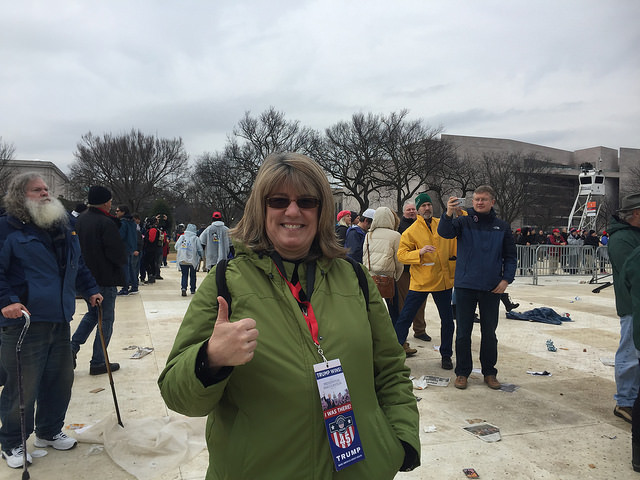 But his message of hope doesn’t translate outside of his overwhelmingly white supporters. And the aggressive, dark tone of his inauguration speech, left non-Trump supporters with a different vibe.

“I definitely feel a lot of anger here,” said Rahul Califya, 19, of the Bay Area in California. “It’s less hopeful and more of a [feeling of] reclaiming something that was taken away from us, a sort of revenge.”

Many of Trump supporters drove hundreds of miles to witness his inauguration.

“I drove in a pick up truck, takes about 11 hours,” he said. “He’s great, worth all the trouble. He made a great speech. There were so many protestors, we had a hard time getting in, running the gaunlet to get in here. The turnout was really good.”

Though Wallace is rooting for Trump, he is not blindly optimistic about the new presidency. The message was clear: Trump is on thin ice and expected to perform. Wallace’s main concerns were “getting people working again” and strengthening the military and borders.

“He’s gonna pull the country together and if he doesn’t, in four years we’ll put him out of office,” he said.