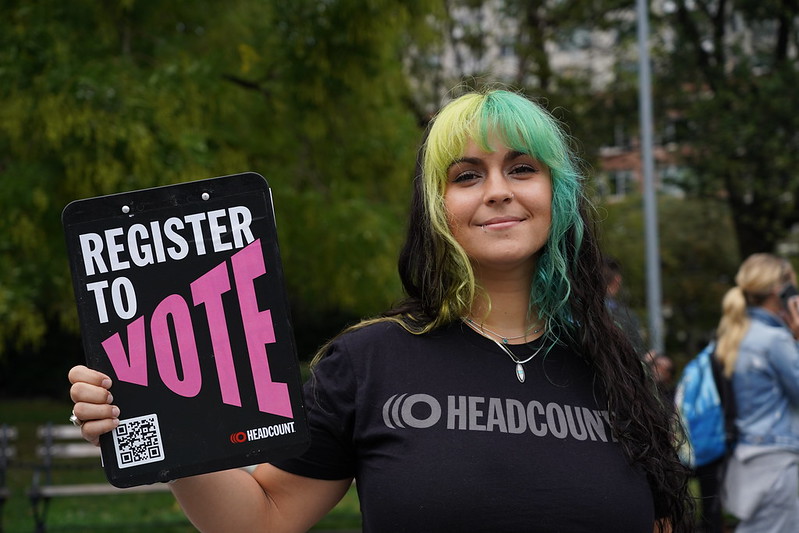 Despite over 5 million New Yorkers being registered to vote,  turnout is always  low in the city.

Most New Yorkers just don’t seem to care or realize their vote matters.

“What people don’t realize is that their voice really matters and elections can be decided by just a small handful of votes and we’ve seen that happen in more than one race across different states,” NYC Votes youth ambassador Nikita Chernin said.

Electing someone to run the city is clearly not a priority for many of the  city’s residents. Polling data in 2017, the year of the previous mayoral election, showed that 1,166,314 New Yorkers voted for mayor city-wide. The estimated population for NYC during the same time was estimated at 8,622,698, according to statistics from the New York Department of Health.

Now, a  new election cycle is quickly approaching  and once again New Yorkers  don’t seem very interested in choosing who will run their city.

“People turned up in decent numbers for [the presidential] elections, but the thing that’s really sad is, we don’t see that kind of stuff there in other elections,” Chernin said. “Yes, people get inspired every four years to come out, but then they also have to realize [elections are] not just every four years.”

During the presidential election in 2020, there was a 61.9% voter turnout in New York City, comprising of 3,045,042 voters for general elections, according to the New York City Campaign Finance Board.

This upcoming local election has nine positions to fill including mayor, public advocate, city comptroller, borough president, district attorney, members of the city council, justice of the supreme court and judges of the civil court for both the county and district.

The voter registration deadline is Oct. 8, with General Election Day coming up on Tuesday, Nov. 2.

“New Yorkers should know that our local elections affect everything in our lives, from the healthcare that we receive to the air we breathe and public safety and so many more issues that matter to us in our daily lives,” said William Fowler, public relations aide for NYCCFB. “That’s why local elections are more important than ever for us all to participate in.”

To help ease Covid-19 fears in regards to in-person voting, the NY senate approved a March 2020 bill that would grant people an extension on using Covid as an excuse if using an absentee ballot until Jan. 1, 2022.

Queens resident and NYC Votes youth ambassador Ara Lopez said that people often want to be heard, but are scared of it actually happening.

“New York feels like an open, yet far away community,” they said. “They don’t think [voting] matters, but at the end of the day, we’ve had a mayor for eight years and we’re only now moving forward.”

Lopez said there’s intimidation that comes with voting, leading to the idea that their vote doesn’t matter.

“If a million people say they don’t vote, then no one is going to vote,” they said. “It’s you as an individual to take that step. One person’s voice can become many people’s voices. It all starts with the individual.”

Olivia Brady, youth voter coordinator for NYCCFB, said that even though young people are typically “disengaged” from elections, they still remain passionate about issues that impact their lives, something they said, has been seen over the past two years.

“From COVID-19, to the protests around climate justice and police violence, youth are at the forefront of movements in their communities,” Brady said. “Young people are thinking about their lived experiences in the city, and they’re really starting to understand the way all of our local elected officials impact their day-to-day quality of life.”

Chernin said he expects more people to vote in this next local election, as many New Yorkers are already registered.

“Barely anyone showed up to the last major mayoral election,” Chernin said. “… It’s a huge election and a lot of people know about it, so a lot more people are hopefully going to vote.”

[…] presidential year elections tend to result in low voter turn-out in New York City.  Which is a shame, because, as I wrote exactly one year […]