Many veterans fight an endless battle with PTSD and suicidal thoughts 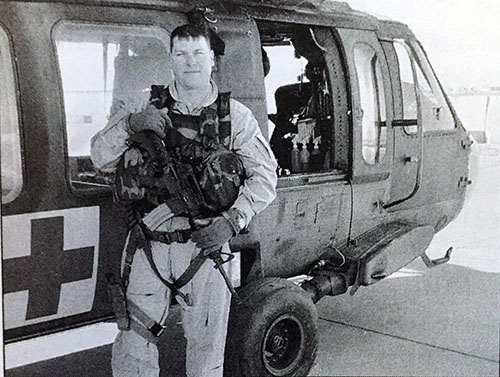 Iraq War Veteran, Matthew Miller, suffers from PTSD and suicidal thoughts. He was a medic in Iraq and tended to hundreds of wounded soldiers.

It all started with a text.

Matthew Miller, an Iraq War veteran, woke up to a barrage of sentiments from friends and fellow soldiers saying “Happy Veterans Day Brother” or “We got’em bros.” But the numerous texts blurred together, as the depressive memories that Miller was so familiar with began to take over.

He remembered the smell of death coming from the seven soldiers he fought to save, but couldn’t bring back home. He saw the face of one of the soldiers, James, and remembered his bleeding wound as he fought for his life. Then, he remembered he face of James’ crying commander after realizing that James was gone. He remembered all of them, with their swollen faces and bleeding bodies, gone.

It’s going to be another bad day, he thought to himself.

Every day an estimated 22 veterans lose their lives to suicide a day, and every day Miller fights to not be one of them.

“I had a suicide attempt years ago,” said Miller. “And I never said anything to anybody.”

There were times when Miller, who served with the Army National Guard, thought it would be easier to stick the barrel of a gun down his mouth and pull the trigger. He hated feeling like an emotional burden on his family, and always relying on others for support.

Despite the severe emotional and mental trauma Miller faces, he actually considers himself one of the lucky few. He dedicates his survival to the biggest positive in his life, his wife Ronda, who recognized Miller needed help.

“I have a great wife who was behind me and didn’t give up on me,” said Miller. “My wife was actually the one that saw [the depression], and was like you’re getting help whether you want it or not.”

Unfortunately, Miller of Maryland, has seen what happens to veterans when they don’t have anyone to come home to and get them through their issues.

“A lot of these guys would come home and you’re not really wired the same anymore and you start having a lot of problems,” said Miller. “You get into self-medicating and fits of depression and sometimes fits of rage.”

Many veterans have resorted to relying on each other to be their biggest support system. In fact, fellow Iraq War veteran, Danny Farrar, of Maryland, strives to be just that for soldiers returning from combat. That is why he started the non-profit organization, Platoon 22, which was designed to bring awareness to veterans suicide.

“If more people knew about it, then it would matter more,” said Farrar.

But Farrar isn’t only an advocate for veterans who struggle with PTSD and suicide. He is also a suicide survivor.

The Army veteran came from a troubled background, he was adopted at a young age, molested by a family member. After getting out of high school, he went straight into the military and remained there for nine years. But there was nothing for Farrar when he returned.

He ended up homeless, his first marriage fell apart, and shortly after that, found himself seriously considering taking his own life.

Farrar’s suicidal thoughts eventually subsided after getting counseling, but he knows that things could have turned out much differently. That is why he is so dedicated to informing veterans and other people in the community about suicide prevention. He wants to let people know that there are resources available that can help.

“You can have mental issues and come back from it,” said Farrar. “You never cure it, but you can go on to live a successful, productive life.”

Farrar said that out of the estimated 22 veterans that commit suicide each day, only five are enrolled in the VA health care system and are actively seeking help. He explained that the system the government has in place for veterans can often be complicated, leading many veterans to feel like it’s not worth pursuing help.

“A lot of veterans don’t feel like dealing with all that,” said Farrar. “So you drink, suck it up, get up, and move on.”

The Veterans Administration or VA isn’t always easy to navigate.

“A lot of times, especially with the VA, they have you just leave a message and the phone rings and rings and you never get a call back,” said Tommy Marquez, Veterans Caseworker for Congressman Duncan Hunter.

Marquez’s primary role in the Congressman’s office is to facilitate communication between constituents and federal agencies, such as the VA. Because mental health has become such a big part of this process, a lot of Marquez’s cases are with terans trying to get their PTSD benefits. In fact, it is the second highest claim received.

One of Marquez’s most memorable cases was with a U.S. Navy Seal who had his PTSD benefits denied. During the Seal’s evaluation he was asked if he had nightmares, and he said that he didn’t, but he had a ecurring dream where he is with his platoon in Iraq standing on a bridge that gets blown up. They all fall down and eventually get crushed by all the rubble and debris. Marquez explained that because the Navy Seal sarcastically told his counselor that he didn’t have nightmares when he clearly did, the VA denied his benefits.

It is stories like this that prevent a lot of veterans from turning to the VA for help. In fact, after hearing about a fellow veteran whose disability ratings sporadically decreased from 80 percent to 30 percent, Miller also lives with the fear that the VA will take his benefits away.

In February, President Obama signed the Clay Hunt Act aimed at reducing veteran suicide and improving their access to health care. The act was named after a former Marine who committed suicide in 2011.

The act requires annual third party evaluations of VA’s mental health care and suicide prevention programs. There will be a centralized website with resources and information about the range of mental health services available as well as a three-year pilot program using peer support to assist veterans transitioning from active duty. It encourages collaborative suicide prevention efforts between the VA and non-profit mental health organizations.

The president’s proposed 2016 budget also includes more than $7 billion for the VA to continue its focus on expanding mental health services for vets. 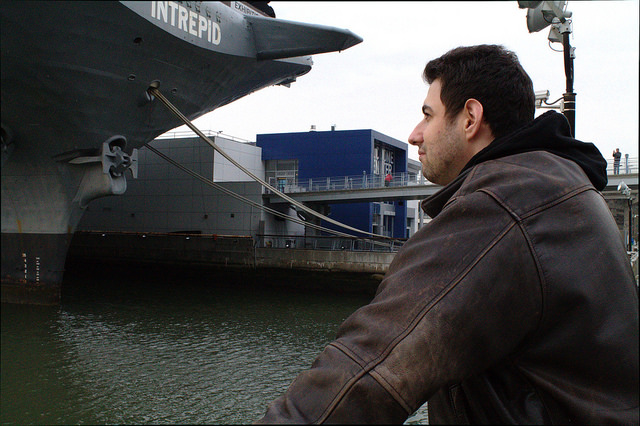 Michael Abramovich an Iraq War veteran, looks out into the harbor by the Intrepid Museum, as he recounts the obstacles he’s faces as a veteran. Photo by Alexandra Zuccaro

While receiving benefits and treatment for veterans returning from combat remains a big issue, it is even more difficult for veterans who never had combat experience. PTSD doesn’t discriminate based on a soldier’s experience abroad, and even those who haven’t served in combat can be affected. This was the case for Iraq War veteran, Michael Abramovich, of Staten Island, who served as a support soldier in the U.S. Army for the National Guard and Army Reserves.

When Abramovich first returned to the states after his service, he felt like he had to suppress his emotional trauma because of the culture of military training which views showing emotion as a negative thing.

“I didn’t have the real combat experience of infantry men and yet I had a traumatic experience. And I was afraid to talk to someone about it because I felt it was a sign of weakness and that I was being a cry baby,” said Abramovich.

Abramovich has since realized that PTSD is not something to be ashamed of and has even found strength rallying behind the issue.

“I did find a great veterans community and I did get involved,” said Abramovich. “Nothing will get accomplished unless veterans stand up and fight for what we do deserve for our service.”