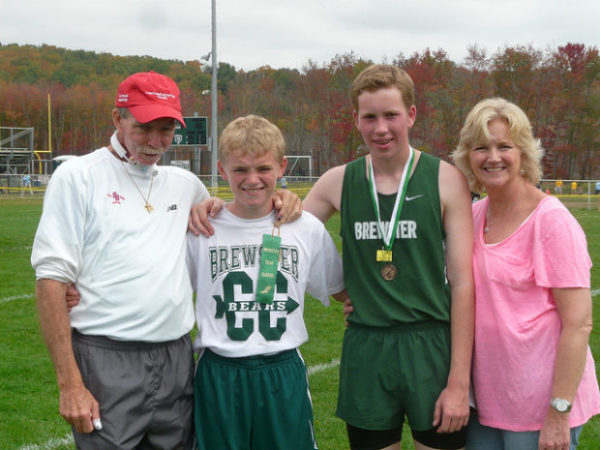 Lynda and Kenny Holler cheer on their sons at the Bear Classic track race in October 2013, 10 months before Kenny passed away. Kenny continued to attend public events despite his tracheotomy. Photo courtesy of Lynda Holler.

A debate over life and death is being waged in New York.

As of 2018, New York has been considered one of the top battleground states for the medical aid in dying debate, centering around the legalization of prescriptions for lethal drugs for patients at the end of their lives. In the two hearings held on the issue this year, many who testified shed tears while telling emotional tales of the end of a loved one’s life.

The New York State Assembly and New York State Senate introduced identical Medical Aid in Dying bills, but neither progressed to a vote. Following the midterm elections, supporters have higher hopes for 2019, but the fight for legislation continues to be slow-moving due to deep divisions within several key groups.

“I would say that there are obviously people on both sides of the issue with every segment of society,” said Diane Coleman, disabilities rights activist and founder of Not Dead Yet, an anti-medical aid in dying organization.

Current legislation under consideration in New York, called the Medical Aid in Dying Act, mirrors legislation in Oregon and other states where the practice is legal. Medical aid in dying prescriptions are only available to terminally ill patients with a six-month prognosis, who must complete two oral and written requests in addition to being approved by two doctors. They must be residents in the state and both mentally competent of making the decision and physically able to self-administer the medication.

According to a poll conducted by Quinnipiac University, 63 percent of New Yorkers support Medical Aid in Dying. At hearings for the New York bills in 2018, advocates and opponents alike testified with emotional, moving personal stories.

One of these stories was that of Amanda Cavanaugh and her partner of five years, New York State correctional officer Chrissy Connery. After being diagnosed only a year after meeting Cavanaugh, 26-year-old Connery fought for three years against her cancer, exhausting every option available to her.

“I took a special interest in [this issue] because my partner Chrissy was coming to the end of her journey with stage four adenocarcinoma cancer,” said Cavanaugh, who is also the  campaign organizer for Compassion & Choices in New York and New Jersey.

Connery and Cavanaugh’s tale is one that too many families have also lived. Around 111,000 New Yorkers each year are diagnosed with cancer, with more than 35,000 not surviving. In fact, some opponents of Medical Aid in Dying legislation have heart-wrenching stories just like Cavanaugh’s, despite ending up with opposite perspectives.

This is the case for Lynda Holler of Brewster, NY. Eight months after marrying in New York City, she and her husband Kenneth Holler received devastating news: he was diagnosed with oral cancer at 39 years old.

Over the next 21 years until he passed, the Hollers had two sons together and learned to adjust to a “new normal.” Kenneth Holler battled through 11 surgeries and eventually lost his ability to speak and eat, but despite the pain he refused to let the cancer dominate his life. He remained an involved father to his two sons, cheering them on at every game, and never once wishing for medical aid in dying.

Their journey was what inspired Lynda Holler to become a passionate opponent of such legislation in the state.

“He made such an enormous impact on people and people are living their lives better because they saw how Kenny lived,” said Lynda Holler. “So, I really realized I needed to be involved in this movement because we have to treasure life, and we have to appreciate that there’s still value that comes out of suffering.”

Doctors remain on both sides of the issue

There is not a clear divide on this issue even within affiliated groups. The medical community remains one of the most divided. Though the majority of physician groups used to be opposed, several have recently switched their stance to neutral, including the American Academy of Family Physicians. Others, such as the New York State Academy of Family Physicians, have announced their direct support.

“I don’t think the medical community is monolithic,” said Katharine Deiss, a practicing physician in medical pediatrics at the University of Rochester Medical Center. “I think they have a split view like everybody else does.”

David Kim, an attending physician in Staten Island, is worried about the ethical burden it would place on physicians themselves, forcing them to be the “judge, jury, and executioner.” Other concerns he voiced include risks to the doctor-patient relationship and violations of some medical codes of ethics, in addition to fears that this would a “cop out” to fixing current care inadequacies.

“Assisted suicide really risks, and probably does, erode trust in the doctor-patient relationship,” said Kim. “We’re talking about death or suicide as a medical treatment to be prescribed by the physician, in order to alleviate suffering or pain by the patient, and that has never been a part of any mainstream code of ethics than any physicians follow.”

While Kim is one of many physicians who firmly believe in literal definition of “do no harm,” other doctors believe that medical aid in dying would in fact help them uphold that oath to patients. Regardless, under the proposed legislation, doctors who do not believe in the practice can opt out.

Another group in the discussion is the disabled community. For them, there is fear about how the legislation might put unequal pressure to utilize medical aid in dying. An able-bodied person might define quality of life in a completely different way than someone who is disabled and some in the community fear that such legislation would target or discriminate against disabled New Yorkers.

“If you look at the reasons that people give, that doctors are writing down for why people want assisted suicide, the top five reasons are not related to being terminal — they’re related to being disabled,” said Coleman, who has been disabled for most of her life, which was her motivation for starting Not Dead Yet.

Oregon was the first state to legalize the practice, with seven other states and Washington D.C. following suit. According to data from Oregon in 2017, the top five reasons were decreasing ability to participate in activities, loss of autonomy, loss of dignity, burden on caregivers, and losing control of bodily functions. These traits are felt by both the disabled community and the terminally ill. In Oregon, most patients who used medical aid in dying in 2017 had cancer, followed by ALS, and heart/circulatory disease.

Also preventing any hints of coercion is legislation stating that doctors and insurance companies are not supposed to offer this as an option. Rather, patients must be the ones to ask for it and seek it out, and still over one third of people opt not to use their prescriptions in the end.

“I don’t know, you know you never know, if someone is going to use it or not,” said Cavanaugh. “People sometimes don’t, but knowing that the option is available is a huge, huge benefit. And so, I think if [Chrissy] had the control should she want it, it would’ve helped her live longer.”

Supporters look to renew their push for legislation in 2019

Hearings for the proposed New York bills lasted more than 14 hours combined. Despite neither bill making it to vote in 2018, proponents viewed the year as an overall success. Cavanaugh spoke of 2018 as a “foundation-building year,” and was happy with how far the movement had come since she first got involved. Supporters are hopeful since the democrats gained control of the New York State senate. 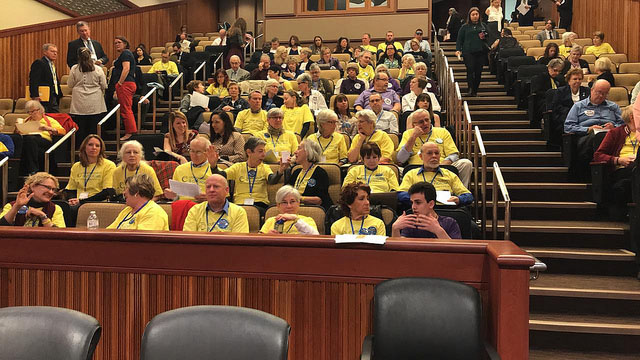 Compassion & Choices  supporters sport the organization’s t-shirt at the April hearing before the New York State Legislature in Albany. Photo courtesy of Compassion and Care.

“The bill that was in the assembly now has even more co-sponsors, legislators who have now signed onto it,” said Bonnie Edelstein, founder of Death with Dignity Albany. “It’s been adjusted and redrafted, somewhat, for this next legislative session, to include even more safeguards and to allay fears of some people who are in opposition.”

On Nov. 14, New York State Senator democrat Neil Breslin held a fireside chat in conjunction with Death with Dignity Albany. Though he expressed mixed support, Senator Breslin seemed unsure of whether or not the bill would progress in 2019.

“With 15 new democrats — and really there’s only about eight or 10 long-term serving democrats, I’m not sure — it certainly will be much better than under the Republicans,” said Senator Breslin. “There’s, to me, a lot of discussion it still needs.”

This is a very informative and in-depth analysis of a controversial issue, showing all sides of the debate. Thank you for your reporting.

What i do not understood is in fact how you’re not really much more smartly-favored than you might be right now. You’re very intelligent. You already know therefore significantly in the case of this subject, made me individually consider it from a lot of numerous angles. Its like women and men aren’t fascinated until it’s one thing to accomplish with Girl gaga! Your individual stuffs nice. At all times take care of it up!

What i do not realize is in fact how you’re now not really a lot more well-appreciated than you may be now. You’re so intelligent. You recognize thus considerably in the case of this subject, made me personally consider it from a lot of various angles. Its like women and men are not fascinated until it is one thing to accomplish with Woman gaga! Your personal stuffs excellent. Always take care of it up!

Tried writing a letter on the Bill wouldn’t let me?
I believe if you’re terminally ill,
In pain, and know you’re going to die, that you should have a right to die in dignity.
I was sent this by my friend whose father, had cancer was in extreme pain.
Nothing helped.
It’s in humane to let a person, be in this state, constantly in agony.
If you’re on life support, brain dead, or severally disabled for the rest of your life, like Christopher Reeve.(Superman)
Who knew he’d never walk again.
Have 0 quality of life.
He tried everything to help him, nothing worked.
If you have a pet, who’s sick they say to put it out of Misery (it’s the Humane thing to do,) I myself had to put down a cat, and most recently My Dog who I kept alive on Insulin, He went blind, He no longer wanted to walk.
He couldn’t see, plus his best friend, My cat was Stolen.
I had to put him down, He was in agony one day, unable to keep down food or water.
I sadly had no choice.
Vets are quick to do this to an animal, yet a Human who can say please, let me die, has to suffer?
Where is the Humanity in that?
It’s time, things changed No one should have to suffer.
You should have the right to end your Life!
or for your Family to say, don’t allow My father, Mother etc to live in pain. to be confined to a bed, or wheelchair not even knowing they’re even here!