Some men not swayed by allegations of sexual assault 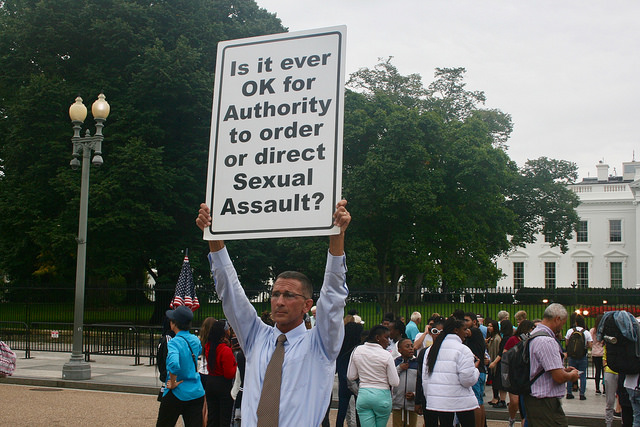 A protester from North Carolina shows his displeasure over the Trump Administration’s  response to sexual assault allegations made about Supreme Court nominee Judge Brett Kavanaugh outside of the White House. Photo by Emma Bolton.

It doesn’t seem to matter much to some male voters whether or not Supreme Court nominee Brett Kavanaugh is guilty of sexual assault. Many had made up their minds long before Christine Blasey Ford’s allegations were made public.

An NBC/Wall Street Journal poll done over the past week showed that party affiliation was still the main deciding factor in people’s disapproval or approval of the embattled nominee, despite rising opposition among women. Between the nomination in August and recent allegations in mid-September, Democratic men’s support fell slightly, while Republican men’s support for Kavanaugh rose slightly.

In Washington D.C. yesterday, those trends were confirmed. For left-leaning men, the allegations only added to their concern over Kavanaugh’s elevation to the Supreme Court.

“I had concerns about him before this episode with Dr. Ford,” said John Rilley, of New Jersey, outside of the White House. “I am very concerned. I don’t support him. I don’t think he tells the truth.”

“It seems like regardless of the sexual assault allegations he doesn’t hold the humility or the integrity of that office,” Bogin said.

He rattled off a list of reasons why he had initially opposed Kavanaugh’s nomination. He did not approve of Kavanaugh’s general lack of candor during the initial Senate hearings or his refusal to commit to recusing himself from future rulings related to the Robert Mueller investigation.

Additionally, Bogin was not satisfied with Kavanaugh’s answers regarding his awareness of the well-documented inappropriate conduct of his former employer Judge Alex Kozinski. As reported by CNN, Kavanaugh’s written responses to the Judiciary Committee state that he became aware of Judge Kozinski’s inappropriate sexual conduct toward female staffers when the various stories were reported in the media.

“The list is decent,” he said. “Perjury for me is pretty much a deal breaker and $200,000 of mysterious debt, from buying season tickets apparently. That seems questionable.”

Bogin’s friend, Matt Marquardt of Seattle, agreed. He sees Blasey Ford’s allegation as another example of Kavanaugh’s unfitness for the office.

However, some men who were excited by the Trump’s choice of Brett Kavanaugh to replace Justice Anthony Kennedy continue to support him, despite Ford’s allegations. 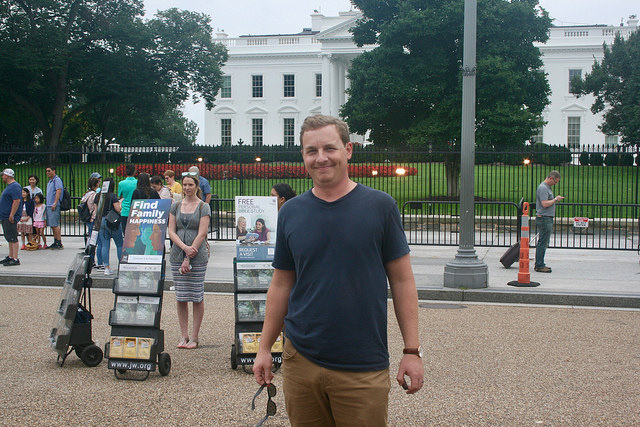 Austin Webb, 30, of Texas, believes Judge Brett Kavanaugh is a great choice for the Supreme Court. He does not believe Christine Blasey Ford’s allegations of sexual assault. Photo by Emma Bolton.

“I think he’s a great pick,” Austin Webb, of Texas, said. “Honestly, I feel like it’s a last ditch effort to delay the pick.”

Webb said he cannot speak to Ford’s credibility, but felt that the allegation, whether true or false, is not enough to disqualify Kavanaugh from ascending to the Supreme Court.

“Is there someone out there that has a completely spotless record?” he asked. “Because we’re talking about something from high school, right? We all did dumb things in high school. If you look hard enough into anybody’s past, especially someone who is up for a position like that, I think you’re doing to find something to be opposed to.”

Keith Acker, from Ohio, who visited D.C. with the Fire & Iron Motorcycle Club, feels that Judge Kavanaugh is being set up for political reasons.

“I think it was all a set up,” Acker said. “I think (the Democrats) found somebody to put off the nomination to see if they can get a hold of the House and Senate.”

He believes Kavanaugh is needed on the high court.

“I completely support him,” he said. “He’s a Constitutionalist. I want a Supreme Court who goes by the Constitution and not put their personal opinion or put their own spin on things.”

To Acker, it’s more than just a political play.

“Either she’s lying or she is mistaken on the incident,” he said. “Honestly, I think she’s lying.”