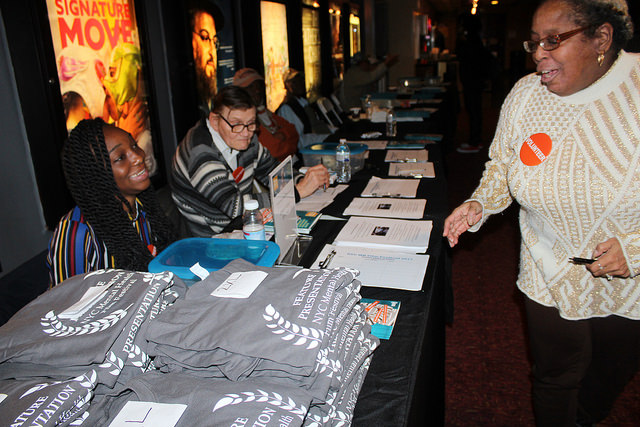 Volunteer Ashley Ellick sits behind a t-shirt table as volunteer Celia Hoskins looks at the display in the lobby of the East Village Cinema. The women are volunteers at NYC Mental Health Film Festival. Photo By Keziah Tutu

Films that create awareness of mental illness were the focus of yesterday’s NYC Mental Health Film Festival at the East Village Cinema.

“My grandmother suffered from mental illness. I want to understand some of what she experienced,” said Eric Williams, a first-time attendee of the NYC Mental Health Film Festival. “By learning about what other people go through, we can then learn about what we need to do to help.”

This is the 13th year of the film festival sponsored by Community Access, a nonprofit organization that supports people living with mental illness. Eight different films were screened during the one day festival, ranging from short pieces to documentaries.

Films were chosen by a screening committee made up of Community Access employees and volunteers at a meeting held at the New York Association of Psychiatric Rehabilitation services, a nonprofit organization in Albany. Genres ranged from documentary, fiction, animated films and autobiographical stories.

“A lot of the time, mental health is associated with homelessness and substance abuse, but there are a lot of people in professional fields that too suffer from mental illness,” said Eugene Smith, 64, a veteran volunteer of the festival. “These films help bring that to the forefront so there is less stigma.”

Some of the film producers also experience mental health conditions, said Sandy Brower, a member of the screening committee.

“The personal stories told by producers, who have a personal connection to mental health, are the most impactful,” she said.

According to the National Alliance on Mental Illness about 1 in 5 adults in the U.S. experience mental illness in a given year, and 1 in 25 adults experience a mental illness that interferes with or limits major life activities. 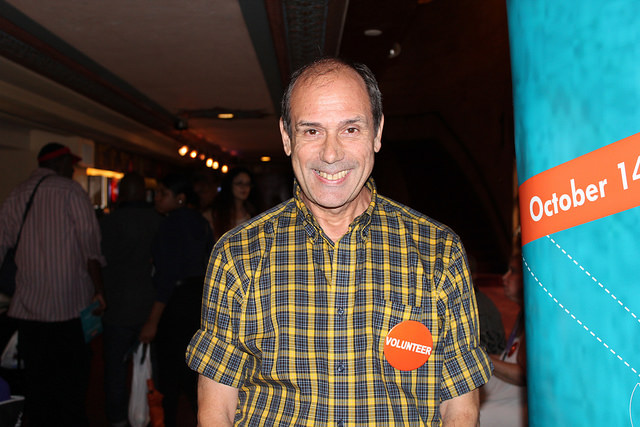 “I was diagnosed with manic depression and psychotic episodes beginning at age 19, and I was in and out of institutions and on various meds,” said Steven Muff, who has volunteered at the film festival for 12 years. “I’m involved with this work because they keep the conversation going, not that anyone has any of the answers, but it’s important to discuss.”

Many volunteers at the festival have mental health issues, Muff said, adding that there is a stigma surrounding mental illness and it is important to educate different communities about what it is and what it can look like.

Celia Hoskins, volunteer who has bipolar disorder, shared her experience of watching one of last year’s films about a young black boy who was confronted by police while having a manic episode.

“It seems as if the moment someone mentions mental health and the authorities are involved the situation turns violent,” she said. “But this film showed how it can be handled gently.”

Ashley Ellick, 24, another first-time attendee and volunteer, came to learn how to build support systems for those affected by mental illness. This cause is especially important to her because her brother was diagnosed with schizophrenia 10 years ago.

Growing up in an African-American household, mental illness was never spoken of until her brother’s diagnosis, she said. Now she wants to create awareness.

“Mental health is almost like a myth in the black community,” she said. You don’t talk about it, you pray it out.”

African-Americans and Hispanic Americans use mental health services at about half the rate of white Americans, and about one third the rate Asian Americans, according to the National Alliance on Mental Illness.

“My advice to others is just be informed, be supportive and listen,” Ellick said.

He appreciates common recommendations and techniques employed by many gamers, as well
as several strategies he has developed herself.