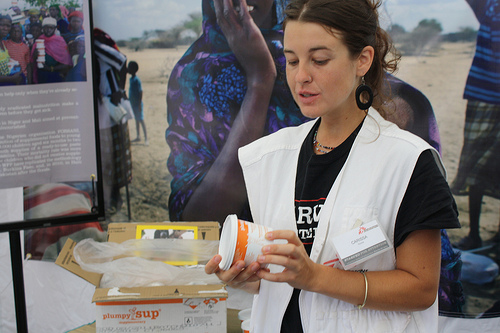 Standing inside a mock field hospital tent in Brooklyn Thursday, Carissa Guild, a nurse, told the story of an 8 year-old girl she met while working in the Democratic Republic of the Congo. The child was so malnourished she was unable to walk when she first arrived in the clinic.

“She was just laying in the hospital, all skin and bones, like a piece of glass,” said Guild, 31, from Greenpoint, Brooklyn.

But after several weeks of treatment, which included putting the girl on a special, nutrient-rich diet of food supplements, she transformed into a sweet, normal girl.

“She made friends in the hospital, she played computer games with me,” she said. “It was amazing to see.”

Guild told this and other stories at an exhibit hosted by international health organization Doctors Without Borders, also known as Médecines Sans Frontières, at Grand Army Plaza. The exhibit was part of a campaign to raise awareness around pediatric malnutrition, which affects an estimated 195 million children worldwide and contributes to more than two million deaths each year of children under age 5.

Visitors were able to learn about the condition and treatment options by taking guided tours through the mock field hospital from MSF nurses, and by watching documentaries on video screens about the work done by MSF doctors and nurses in sub-Saharan Africa and South Asia. 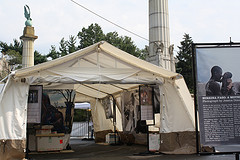 As part of a campaign to raise awareness about pediatric malnutrition, international health organization Doctors Without Borders constructed a mock field hospital tent at Grand Army Plaza outside Prospect Park in Brooklyn. Photo by Chris Palmer

Guild, who served as an MSF nurse when she met the girl in the Democratic Republic of the Congo, also spent six months as an MSF nurse in Burkina Faso in West Africa. She said that malnutrition isn’t always a difficult problem to solve, it just requires the right treatment.

“It’s amazing how this can make kids better,” she said, holding up a packet of “Plumpy Nut,” a supplement that is supposed to taste like peanut butter and contains a variety of nutrients. “They get two or three a day, and after a week you can see them getting better. Within six weeks, they’re discharged.”

That rapid improvement is what is most rewarding to see, she said.

Visitors to the exhibit were humbled by the stories they heard.

A nurse at New York Presbyterian Hospital, Petzold came to the event because she is interested in applying to be a nurse overseas with MSF.

“Everyone here has been so enthusiastic,” she said. “I was really glad to talk to a nurse, ask questions. It was wonderful.”

“I can see how privileged I am, even to just have running water,” she said.

“There’s so much need,” Guild said. “I want to keep going out there for those little kids.”