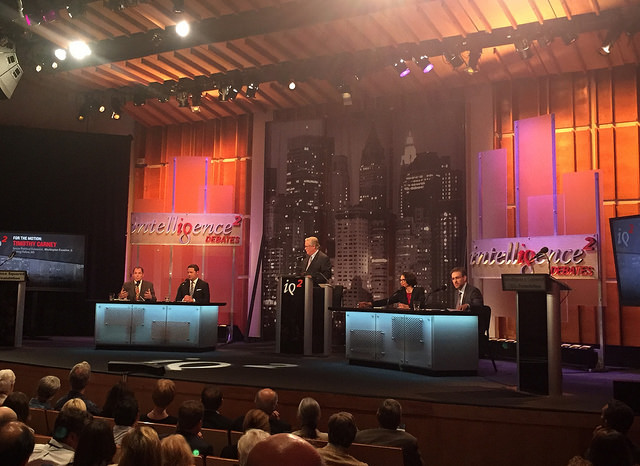 Laughter filled the Kaufman Music Center in the Upper West Side last night when deputy editor of the Editorial Page, Bret Stephens, posed his audience with a short list of questions.

“Who here has been to Europe in the last five years?” Stephens asked. “How many of you have graduate degrees? Generally speaking, Sancerre is white or red wine?”

His questions were first met with laughter followed by hesitantly raised hands as the majority recognized their elite status.

Tuesday’s mock debate was hosted by Intelligence Squared, a nonprofit organization focused on debate and public discourse. And if it was any indication of what is coming, we should all pack our plastic ponchos for the mudslinging about to take place.

The debaters faced off two-against-two. Those ‘For’ the motion sat stage right and those ‘Against’ the motion stage left. Unlike the typical liberal vs. conservative format, this group was made of four conservatives. Over the 90-minute debate the pairs argued if we should “blame the elites for the Trump phenomenon”, while the audience sat safely at an arm’s length away to keep clean.

It quickly became clear none of the debaters were Trump supporters. Stephens later brought about even more laughter when he compared Trump voters to patrons of a strip club.

“Every time he says something dirty, it turn out people want more of it,” he said.

“Donald Trump, a man who, as John Mulaney tells us, begins every day by asking himself, ‘What would a cartoon rich person do?’” he said.

John Donvan, a correspondent for ABC News, moderated the debate. He invited the audience to share their verdict, each person holding a small white remote attached to his or her seat by a long red cord. This device was the gavel for this pseudo judge and jury. 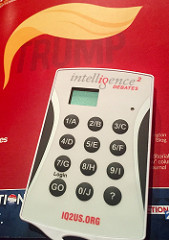 Intelligence Squared US encourages audience participation and invites them to provide insight into the debate by voting. Keypads are attached to each chair in the auditorium. 1/A is ‘For’ the motion. 2/B is ‘Against’ the motion. 3/C is ‘Undecided’ Photo by Brandon Gomez.

Linda Ross of the Upper East Side, Manhattan enjoyed the mock debate and felt that all had their arguments well placed.

“Personally, I hold the voter responsible for the mess we are in.” she said. “How does the old saying go, ‘You get the government you deserve.’’

Attendee David Brunswick of Manhattan acknowledged the tendency for the debaters to point out the many shortcomings of a certain candidate, but also the importance for the voters to do more than simple name-calling.

“I’m surprised that this question has morphed into another question, which is which of the two sides is most stridently anti-Trump,” said Brunswick. He was the first member of the audience to address the debaters.

Brunswick also shared his struggle with the audience’s reactions.

“The speaker or side that seemed the most anti-Trump, garnered the greatest suffrage and popularity and that was not the purpose of the debate,” he said.

Brunswick acknowledged a theme within the 2016 Election – who has the greatest punch line?

Laughter was the default reaction for the majority of Tuesday’s audience. But Donvan reminded us of something very important in his opening comments.

“Who laughed when Donald Trump set out to win the White House?” asked Donvan. “Lots of people. But who got the last laugh and the Republican nomination?”