MoMa looks at how refugees live 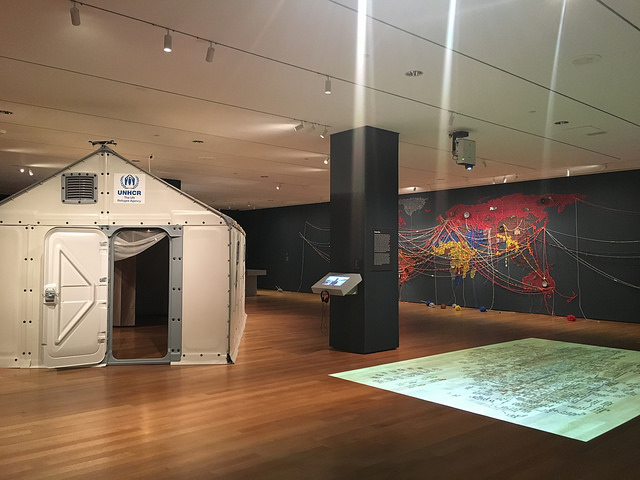 The Museum of Modern Art (MoMA) has opened a new exhibition “Insecurities: Tracing Displacement and Shelter” which showcases how refugees live.

Bringing together architects, artists and designers, the exhibition explores the issue of refugee crisis through three angles, borders, shelters, and camp cities, which provided an opportunity for people to look closer into refugees’ lives.

According to United Nations, 65 million people globally are currently displaced due to conflict and persecution. Among them, 21 million have fled their countries and became refugees. In 2015, almost 24 people per minute were forced to leave their homeland.

Insecurities, constant movement, and endless fear that accompany these refugees are presented as a main theme at the exhibition.

The world map made up of wires, circuit boards and speakers at the right hand side of entrance caught Sowmya Lyes’s eyes immediately when she visited the museum yesterday.. As a student majoring in Design at School of Visual Arts, Lyes thought that the map showcased the refugee crisis as a global concern and the wires effectively depicted how entangled, trapped refugees are..

An actual model of refugee camp sponsored by the UN Refugee Agency (UNHCR) was also on display.

“I feel related to those people when seeing this life size refugee shelter as in how difficult it would be to manage a family in such a small space and with such limited resources,” said Deval Mistry, of India. “We can empathize with them about the state they are in right now.”

Andrea Nogales, 34, an elementary school teacher, was impressed with the background sound on site. To simulate the real condition of refugees, the exhibition was surrounded with a harsh, continuous sound similar to civil air defense alarm that refugees have to hear over and over again every day.

“The siren makes you feel like you are on alert all the time and resonate with refugees on one of the reasons why they left their original homes,” Nogales said.

Another eye-opening element is the large refugee camp map projected on the floor. After realizing the impossibility of making a conventional map of an actual refugee camp in Northern Iraq, artists spent a year working on the camp and documenting the spaces. They also built an interactive display that allows visitors to virtually walk through and even enter into the camp with narratives unfolding in front of them. By utilizing multimedia techniques, this pathway is able to tell a personalized story vividly about each refugee to visitors.

“We intend to tell people not only living conditions of these refugees, but also that there is a life for them,” said Sean Anderson, associate curator of MoMA’s Department of Architecture and Design. 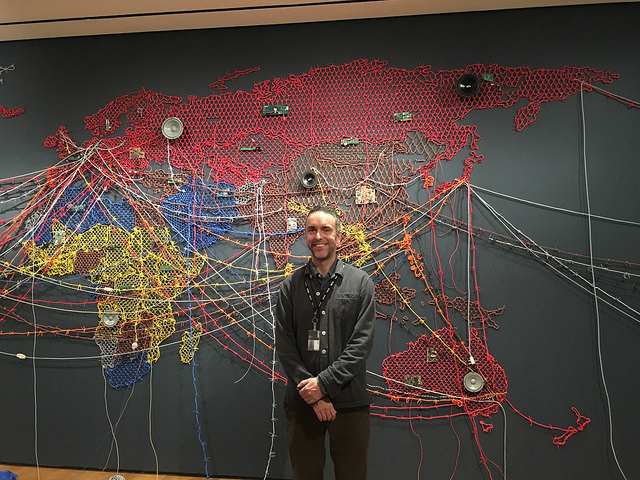 Sean Anderson, associate curator in the Department of Architecture and Design at MoMA, is standing in front of the eye-catching and creative map representing the global refugee crisis. Photo by ANG LI.

Refugees don’t know how long they’ll be in a camp. The average length of is 17 years.

“They have a strong belief that they’ll go home one day,” he said. “But if you look at the two images here: one is the world’s largest refugee camp in Northern Kenya, Dadaab, and the other is their destroyed homeland back in Syria last year. Which one looks more like a ‘home’?”

The exhibit also dealt with their education. Over half of the world’s forcibly displaced population is children, making education a key concern in refugee shelters. The tools like School-in-a-Box, distributed by UNICEF and UNHCR, contains materials to set up a makeshift school for up to 80 students. 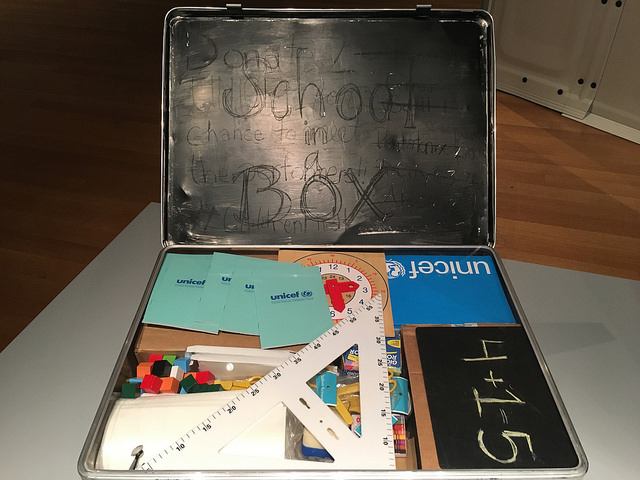 School-in-a-Box, provided by UNICEF and UNHCR, contains materials to set up a makeshift school for up to 80 students. Photo by Ang Li

“As a teacher myself, School-in-a-Box is appealing to me,” Nogales said. “It seemed awesome that we were able to at least provide the refugee camps with the tools they need to have some education as they continue to struggle through their day-to-day life.”

The refugee camp map also showed clear classification in different sections based on which place they were originally from.

“They have made it their home,” Mistry said, “They do follow their own lifestyle that they used to back home. They have given in that it is their new home, but the hope is still there.”

The exhibition will be run through January 22nd.