A house with no roof in Lake Charles. Photo courtesy of Wikipedia

The night three months ago that Hurricane Laura hit Lake Charles, Shonell Bacon, a young writer who works with publishing houses in Louisiana, was in her hallway. To her, the disaster sounded like a train passing by with full force. To date when she hears trains, Bacon freezes.

“Suffering through the PTSD of Laura, it has been a nightmare in a way,” she said. “You want to lay in bed forever and feel the pain and grief of something like this but the world doesn’t stop because a hurricane destroyed your town.”

Laura, a category 4 hurricane, hit parts of Louisiana in August, leaving many homeless killed 77  people in Louisiana, Texas, Haiti and Dominican Republic. It decimated at least 10,000 homes and damaged over 130,000 structures. The disaster caused the state billions  in agricultural and farming losses and destroyed industries like timber and fisheries. Hurricane Delta then struck in October adding to the destruction.

Months later people in Lake Charles, Louisiana are still struggling to string together the pieces of their lives. Roofs are still covered with tarps, foundations of homes are infected with mold, people are still living in trailers and tents and debris on the streets.  Six weeks later, flooding caused by Delta weakened the already damaged structures.

“Driving through Calcasieu and Beauregard Parishes, your heart swells way up into your throat in pain for your family, friends, and neighbors,” said Debbie Barras Arnold, a local from one of the hardest hit areas. “It is going to be years before we rise from the ashes.”

Louisiana is a state prone to hurricanes. In 2005, hurricanes Katrina and  Rita left many broken and in pain. Most believe that the damage caused by hurricanes Laura and Delta has been just as devastating.

“A lot of the people I have spoken to, said that Laura was way worse than Rita,” said Rebecca Dickinson Reed, a mother of two who had evacuated for Hurricaine Rita. “We stayed for Laura and that was the scariest thing I have ever been through…shingles ripping off, water pouring into my childhood home. The ceiling fell in the bathroom, the moment I walked in.”

Survivors in Lake Charles said they have been deserted by local media and have been on their own.

“We were flabbergasted at the lack of news coverage from Laura,” said Reed. “My husband knows people that live an hour away and they had no idea of the amount of devastation that we had here, until my husband sent them pictures of what we were going through.”

In the aftermath of these disasters, most of the people were depending on the assistance from the Federal Emergency Management Agency (FEMA) and the government. But residents said the lack of empathy and negligence  on their part has been appalling.

“Never once after Laura or Delta did I see a rescue officer or a policeman, no Red Cross, nothing,” said Beth LaBeau whose post had gotten a lot of traction after she shared a heartbreaking account of the night Delta had struck.

LaBeau said that her post had received thousands of responses and people from California and Africa had sent help but she never heard back from any government official.

“My calls to the Mayor were ignored,” she said. “The Governor never responded. Calls to local news ignored. Families were living in tents. There was no water, no toilet.”

But on the afternoon of Aug 29, President Trump  visited the disaster-struck areas of Louisiana with FEMA Administrator Pete Gaynor. Following Laura,  Trump approved a disaster declaration specifically for Louisiana with provisions of over $207 million for individual and housing assistance and around $2 million for public disaster assistance.

According to FEMA’s press release  Hurricane Delta survivors can apply for assistance to make their current homes habitable. Assistance can also be granted for the replacement of essential household items, medical and dental expenses, and funeral and burial costs of the affectees.  FEMA also provided suggestions on rebuilding homes to provide maximum disaster resistance. The agency also has a helpline so  victims  can reach out to their community education and outreach specialists for guidance. 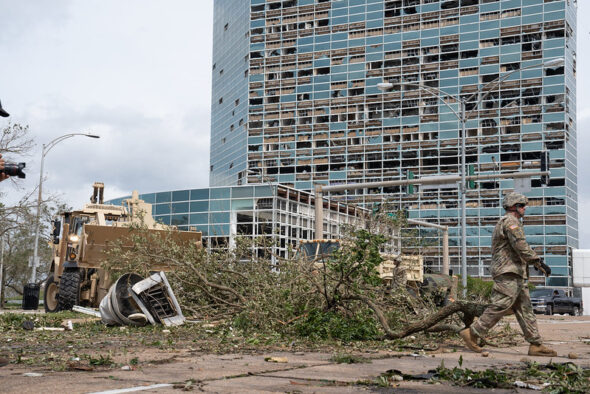 Soldiers from the Louisiana National Guard respond immediately after Hurricane Laura destroyed much of Lake Charles. They performed route clearance, and search and rescue missions. Photo by Josiah Pugh

While talking to the press last month, Nic Hunter, Mayor of Lake Charles, said that the city needs the help of American people to speed up the recovery process.

“We have residents in Lake Charles who are having to deal with the wind damage from Laura and having to gut out the homes because of Delta,” he said. Hunter said that they are pleading to volunteer groups and faith based organizations to step in.

But residents said it was not enough.

JayVon Muhammad, the CEO of South West Louisiana (SWLA) Center for Health Services,  said such disasters expose and unveil the staggering racial and ethnic inequalities. The clinic where she stayed the night of Laura is located in a low-income area of Lake Charles that mostly consists of Black residents. While Muhammad has home owner’s insurance,most of the local residents do not, and can’t afford to rebuild.

With the second wave of COVID-19  knocking on doors, temperature dropping by the minute and holiday season around the corner, the challenges of residents multiply manifold.

The coronavirus pandemic has also slowed down the process of recovery and rebuilding in most areas.

Many survivors have been forced to relocate to dangerous areas.

“I am on SSI once a month,” said Alyissa Thomas, 19  and a mother of two toddlers. “We are currently in an apartment in Lafayette, where there’s shooting almost every night.”

This holiday season will be particularly grim for many of the survivors.

“It is depressing to drive around Lake Charles,” Reed said. ”The landscape of my city is forever changed.”

There has been a silver lining even in this adversity. Despite the inevitable challenges of sanitation, scarcity of clean drinking water, and power outages to juggle with, resilience has prevailed and brought the community together.

Muhammad said that three days after Laura, people brought food from their refrigerators and the town had a collective barbeque. Later, the neighborhood had received funds and more help arrived.

“Houston Mayor’s office sent four to five huge trucks with supplies days later,” she said. “We’ve handed over 40,000 boxes with food and necessities since the disasters and fed over 16,000 hot meals since the two hurricanes hit.”

The repair and relief work is still underway. ‘SWLA Hurricane Aftermath 2020’ is a Facebook community of over 120,000 members, created for them to share their stories of triumph and seek help. Many other fundraisers collect donations for the communities too.

“God bless the Church groups that have stepped up to help in all the ways they could,” said Lena Leger, another survivor. “There are still shoes to fill but I’m sure we will get there. I just wish it could be sooner. It has been three months and that’s a long time to live in a tent in Louisiana.”