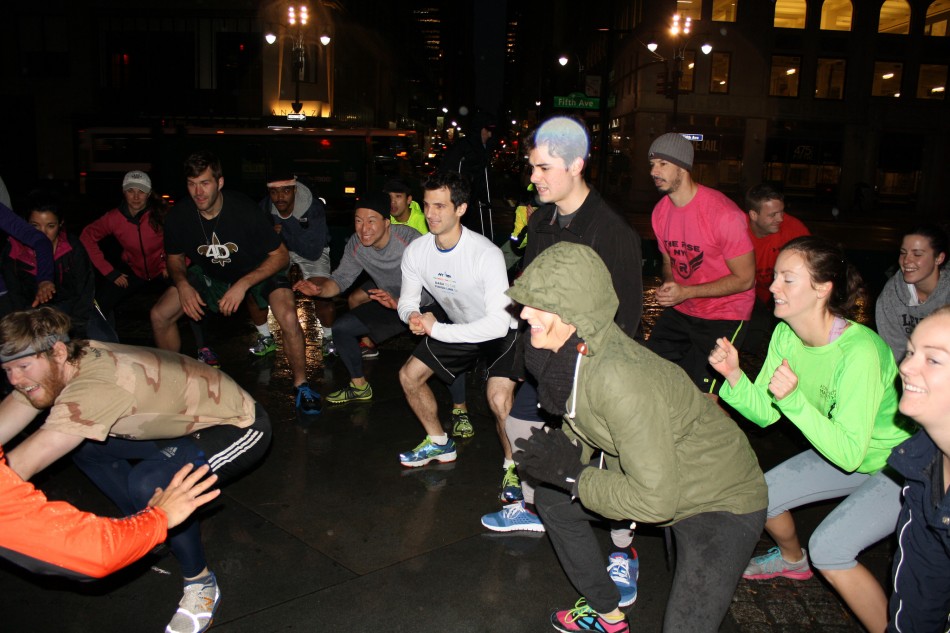 On top of the steps of the New York Public Library a group emerged through the darkness of the cold, rainy morning wearing brightly colored athletic gear. It was half past six on the Wednesday before Thanksgiving, and it was time to work out.

More than 30 people woke up before dawn to take part in a boot camp class run by The Rise. The organization runs free outdoor group fitness classes throughout New York City, adding their name to the many crossfit type programs emerging across the city and the nation. These classes offer quick, high intensity workouts that both double as a means to get into shape and an environment to form new friendships.

“I would say that a lot of people would show up initially because they probably think they’re going to get a good workout,” said Dave Johnson, one of the leaders of The Rise. “They end up staying for the friendships, for the social scene, and then they end up getting fit over time, it’s a byproduct of hanging out with your friends.”

Johnson, 33, started The Rise a little over two years ago with friends Anthony Burdi and Joseph Mullins as a way to work out with one another and hold each other accountable. What started as a way for three friends to stay in shape has grown to 30 plus people gathering at least three times a week to motivate one another to be the best they can be. Social media has helped the group increase in numbers, but Johnson admits that the key to becoming more popular has been simply showing up.

Similar to other bootcamp or crossfit related classes, The Rise workouts vary each session but usually include staple exercises such as pushups, crunches, burpees and other body weight moves that work multiple muscle groups. The Rise is unique in that outside training equipment is never used during a session, as it is common to see resistance bands or TRX ropes integrated into the routine of other bootcamp classes. According to Johnson, the abundance of group training classes is part of an emerging fitness movement that is seeing more and more people turn away from traditional exercising that does not involve a social aspect to it. Whether it is the inclusive environment or the fast paced regiment, these types of workouts are proving to be effective.

“I don’t know if I have been in better shape in my life, so I think the results speak for themselves,” said Johnson, who has been involved with free fitness groups for almost eight years. “It’s partly that, but it’s also the community. People pushing each other, and having other people to see. That guy is not quitting, I don’t want to quit.” 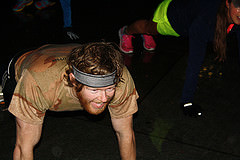 The Rise co-leader Joseph Mullins having some fun in the rain while holding his plank. Photo Credit: Ben Shapiro

There are many other similar classes being taught throughout New York City, but most are led by full time physical trainers and therefore cost a fee. The leaders of The Rise are workout enthusiasts that feed off the camaraderie and energy of training with other people. The trio, led by Johnson who is studying to become an economics professor, enjoys positively impacting the lives of others. All they require to take part in a class is an early wakeup and an optimistic attitude. Also, just like many of the people that join The Rise, they enjoy making new friends as well.

“There are no better people to be friends with than the people you are working out with,” said Johnson. “My best friends are here, and I’ve made them through this group.”

The community factor helps push people during these workouts, but it also is the reason they are drawn to them in the first place. The Big Apple can be lonely at times, and especially for people who are new to the city. Group fitness classes contain members who immediately share a common interest and hobby to bond over.

Arie Smith, 24, has been a regular with The Rise for almost a year now, and a native of Great Neck, Long Island, Smith said he understands the social value the class brings to certain individuals.

“I grew up in New York, but I think for a lot of people who have just moved here, or are even here from another country, this is like their main social group,” said Smith, who works as a software developer in Manhattan. “I mean, I’ve met a ton of friends here, we have outings and stuff. I don’t know, I think it’s an amazing place to meet people.”

One of those people not originally from the area is Danielle Brining, who has made The Rise a regular part of her weekly schedule. Brining, 25, is originally from Bermuda, and is now at medical school in Texas, but she has been on assignment to do research in New York for the past six months. Not knowing many people in the city, Brining needed a way to make new friends, and found the program on a website promoting free activities taking place in New York. Despite not previously enjoying early morning workouts, she found The Rise’s positive energy and unity contagious, and has been going back ever since.

“I have never been a morning workout person before, but once I started coming here, everyone was so awesome, I thought they would hold me accountable, but it’s not accountability, it’s that you want to see them,” said Brining, who hopes to return to New York City for her residency. “They are just great people, we hang out together, we had like a friendsgiving. It just kind of keeps me coming in the morning even though I am the opposite of a morning person.”

Aside from the social aspect, Brining is one of many former college and high school athletes that participate in these types of workouts. Brining played rugby in college and missed the structured workouts and gameplay that college athletics provides. She compared the jovial atmosphere of group fitness to that of being part of a team, where she doesn’t feel as if she is working out until she experiences soreness the following morning.

“I always had leagues in college and stuff, but once you get out of college, you don’t really have groups that are as easy to can get involved in,” said Brining. “I have tried them at gyms but when you don’t know anyone at the gym… but here everyone is so awesome, and with the high fives and everything, it doesn’t feel like a workout.”

While former athletes look to group fitness classes for the structured training and sense of teamwork it provides, workout classes such as The Rise serve non-athletes wanting to fill physical and emotional needs as well. Tiffany Judkins has been attending The Rise workout classes since the summer of 2013 after previously not prioritizing physical fitness. Judkins wanted to get into shape, but more importantly needed something to commit to, and people she could count on. After going through what she described as traumatic experiences, Judkins, 33, found the perfect escape.