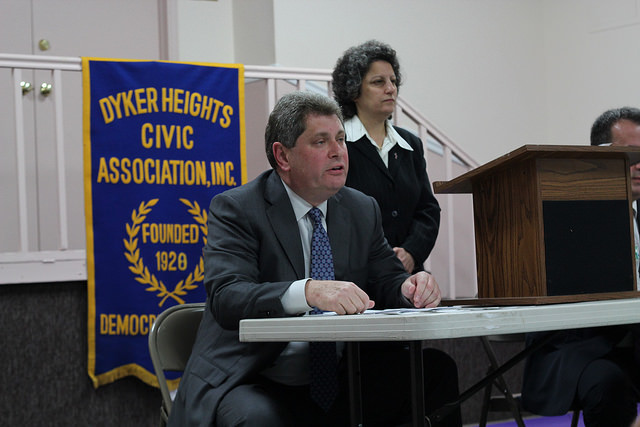 Assemblyman Alec Brook-Krasny at a debate in Dyker Heights. Photo by Bailey Wolff

State Assemblyman Alec Brook-Krasny said that he lived for 30 years in a place where only one opinion was tolerated and citizens were not allowed to debate their views.

“That’s not good,” Krasny said. “You have to have a debate because you want to do the best for the community to grow and be better.”

Brook-Krasny, who immigrated to the US in 1989 from Moscow, hopes to be elected for his fifth consecutive term and to continue the debates that he values so much. His opponent is Republican-Conservative Stamatis Lilikakis, a private business owner and first time politician running for the 46th District Assembly seat.

“You’re not listening to the people of the community,” Lilikakis told Brook-Krasny at a debate earlier this month. “You’re doing what the party is telling you to do. I’m saying you need to do what the citizens tell you to do, because we’re supposed to be their employee.”

One of 150 assembly districts, the 46th district is made up of five diverse neighborhoods in the borough of Brooklyn. Brook-Krasny said constituents speak more than 50 languages and that such a diverse population needs a “balance-minded” representative with “wide experience.”

On Nov. 4, this population will go to the polls and either re-elect Brook-Krasny, or give Lilikakis a chance at leading their district.

Ted General, a long-time district resident and columnist for the Home Reporter Newspaper, weighed in on the race: “Alec Brook-Krasny has a good grasp of what’s going on in the community. I’m kind of partial, whether it’s a Republican or a Democrat, to a guy who’s got community roots and has been involved with community organizations in some fashion,” he said. General hadn’t heard of Lilikakis prior to this year’s race.

Three decades ago, as Brook-Krasny considered immigrating to America, he worried about the backlash in Moscow if he was denied a visa. “I knew people who had applied and then lost their jobs, their opportunity to feed their families, the chance to make any kind of money at all,” he said. “I was deeply afraid that my family could end up like that if I applied.”

In spite of the danger, Brook-Krasny applied for a visa and was approved. He was 31 years old and knew only “20 words” of English when he arrived in New York. His first job was at a shoe store. Within two years he was the store manager. He quickly learned English and gained business experience.

At Columbia University, he earned a business degree, adding to the engineering degree he had earned in Moscow. As the founder of a family-entertainment company, Brook-Krasny built important relationships with many members of the community. In 2001, he was offered the position of executive director of the Council of Jewish Émigré Community Organizations (COJECO), an effort to connect the Russian Jewish community with the Jewish community in New York. After several more years of leadership, he won his first election, taking over the 46th Assembly District seat in 2007.

The assemblyman attributes his repeated re-election to his “balanced mind.”

If re-elected, he plans to continue this balance by stimulating development and promoting afterschool programs for young people in his district. He pointed to the improvement of Coney Island, an oceanside entertainment community that has seen economic growth in the past eight years, as evidence of his effectiveness.

Though Brook-Krasny is optimistic about his policies, Lilikakis maintained that it is time for a change. “Two hundred thousand people left the state last year, and we need to lower taxes to keep more from leaving,” he said. “We have to become business friendly. (Businesses) shouldn’t be overtaxed; they should be rewarded.”

Lilikakis said he will remedy this problem with tax cuts and incentives to attract new businesses to the 46th district. “We need to encourage young business people to open their business in New York.” “I’m tired of being a blank check for Washington.” “We need to represent the values of our community.” Audience members cheered for each of the statements Lilikakis made at this debate, which he also had made in other political debates and forums.

With just days to go before election night, the very debate the assemblyman sought when he came to America in 1989 is the tool now in front of him that will either get him re-elected or end his incumbency at four terms. With his “balanced mind” and “wide experience,” Brook-Krasny thinks he is still the right man for the job.