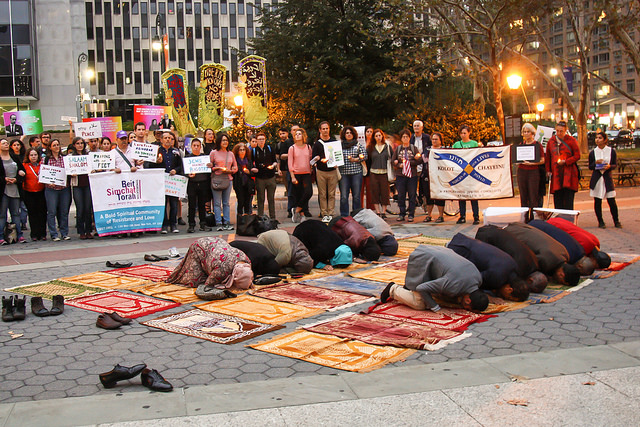 Muslims praying at the No Muslim Ban rally and vigil in Foley Square, New York today. Photo by Stella Levantesi

In New York’s Foley Square, Muslims, Jews, Christians and people not affiliated with any religion, came together tonight to rally for “No Muslim Ban Ever.” But behind their prayers and lamp-lit banners was so much more than just a policy protest.

“There’s that sickness of bigotry of thinking that you can keep somebody out,” said Rabbi Marisa Elena James at the Lower Manhattan protest. “Nobody is immune to being drawn into a hateful ideology.”

It’s three days before the latest Muslim Ban is expected to take effect.  The executive order prohibits travel to the US from six Muslim-majority countries: Iran, Libya, Somalia, Sudan, Syria and Yemen. Chad, North Korea and Venezuela were added to the list, while Sudan was removed.

Muslims living in the US are fighting a double battle, nationally, to secure their life and protect it from islamophobia, and internationally, in their country of origin, which is, in many cases, shaken by violence, conflict and terrorism by extremists of their very own religion.

The pattern the protestors see of prejudice towards Muslims is destruction on many levels.

“It’s counterproductive, because it alienates the only people who, if one really wanted to fight terrorism, you could turn to,” said Priscilla Read of the Westchester Coalition Against Islamophobia.

Today, Somalia was hit by one of the most lethal terrorist attacks of its history when a truck bomb in the country’s capital, Mogadisciu, caused more than 500 casualties. 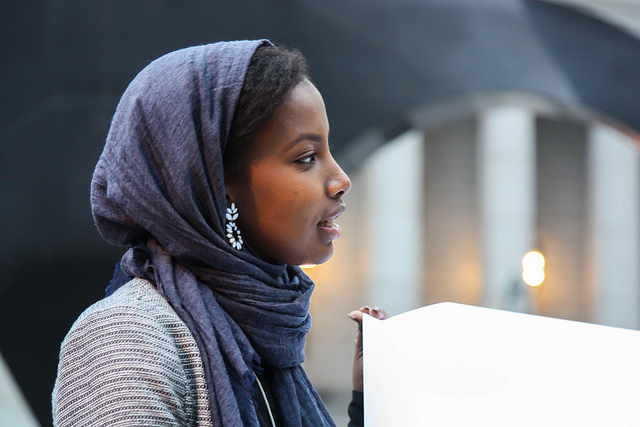 Fadumo Osman, 21, student and President of the College Democrats at NYU holding up a banner at the No Muslim Ban rally in Foley Square. Photo by Stella Levantesi

Fadumo Osman, 21, the President of the College Democrats at NYU, is the daughter of Somali refugees who came to the US with nothing.

“I grew up in a post 9/11 world where I was viewed differently just because I wore a hijab in high school,” said Osman. “Now, my people are getting killed on their own land by those terrorists that a lot of people in this country are accusing them to be.”

For some, the ban is a reflection of the tendency to attach Muslims to the stigma of terrorism.

For others, national security prevails over human rights.

“This isn’t even a ban, it’s so people can be vetted properly, it’s not targeting Muslims,” said Karen Braun, a Trump supporter from New York. “There are two non-Muslim countries involved. This is the objective, to stop terrorists from coming in.” 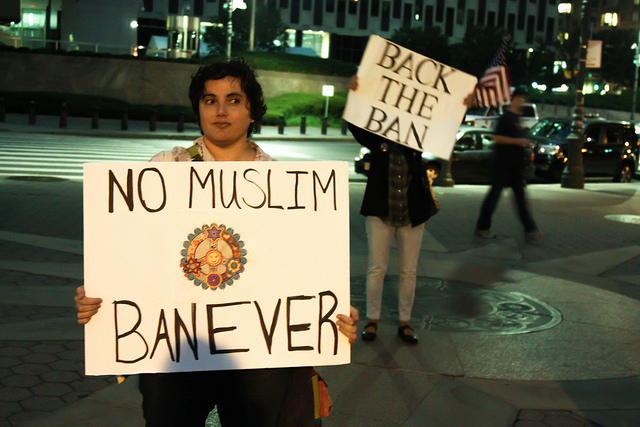 A Trump supporter in the background is being covered by a “No Muslim Ban Ever” activist at the No Muslim Ban rally in Foley Square, New York today. Photo by Stella Levantesi

For the activists of the mobilization however, the presence of two non-Muslim countries in the ban doesn’t invalidate its intrinsic anti-Muslim motive.

“This is a Muslim ban, regardless of other non-Muslim countries involved,” said Osman. “Beyond that, there’s a very deep, rooted issue when it comes to white supremacy, when it comes to what it means to make America great again.”

But today’s mobilization wasn’t only about a national conversation. 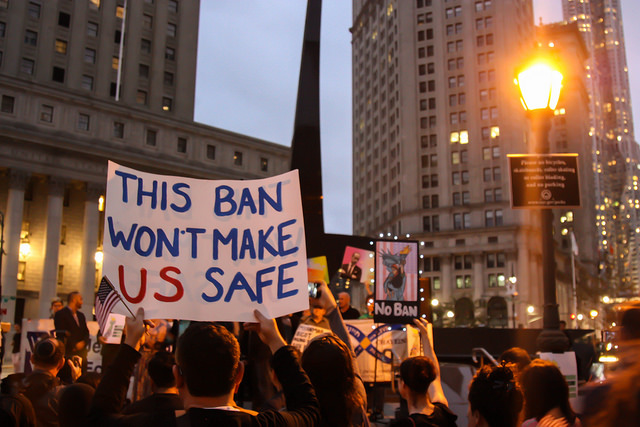 The crowd holding up their banners at the No Muslim Ban rally in Foley Square, New York today. Photo by Stella Levantesi

In Myanmar, Rohingya Muslims are being inhumanely tortured by the country’s military; villages are ravaged and burnt, children are set on fire, women are raped, gang-raped. The mass persecution has forced an exodus from their homeland to Bangladesh, a predominantly Islamic country.

“It’s ethnic cleansing,” said Begum Hosheara, a Bangladeshi woman who moved to the US 21 years ago.  “They’re killing people, piling them up in open pits, covering them with petrol and burning them. They’re cutting people’s limbs, women’s breasts and letting them die.”

Amnesty International has accused Myanmar of crimes against humanity, but critics wonder if international law terminology makes a difference.

“I can’t sleep at night,” Hosheara said. “My nephew is in Bangladesh and sent me a video of a desperate man shouting ‘If they want to kill us, just send us a bomb and kill us all together’.”

Since August 25th, more than 400,000 Rohingya have fled Myanmar and are now refugees living in barbaric conditions with nothing, often gravely injured and mourning the atrocious deaths in their families.

“These people are powerless, they have no voice, they are getting killed only because of their ethnicity, only because they’re Muslim,” said Begum. “We need to forget about religion, we need to be human again.”

Protestors said in the US, Trump’s policies have created a vicious cycle.

“The terroristic acts that are committed by Islamic extremists are being instrumentalized,” said Read. “For example, 9/11 fit perfectly into a neo-conservative framework and now we’ve got people absolutely terrified all the time.”

According to a 2017 Pew Research Center survey, 75 percent of respondents said, Muslims face a lot of discrimination in the US. Only 3 percent said it is easier. 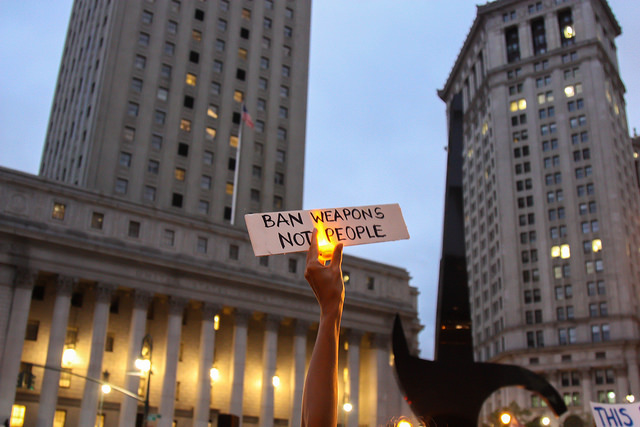 A small peace sign being held up at the No Muslim Ban rally in Foley Square, New York today. Photo by Stella Levantesi

The fear of being vulnerable to verbal or physical assaults is so high, some Muslims said they avoid reporting acts of hate towards them.

“One day I saw two girls push an old Muslim lady into the street, she risked being run over by a car,” said Begum. “‘She can’t wear this dress [the hijab] here’, the girls said. “Before, when anything happened we could call the police and report, but now we’re scared of being found and attacked again.”

But Osman said the twilight-lit crowd reminded people of hope.

“The thing that has kept me going is solidarity, in the form of showing up physically,” she said. “Just seeing you guys out here, reminds me that I shouldn’t give up.”