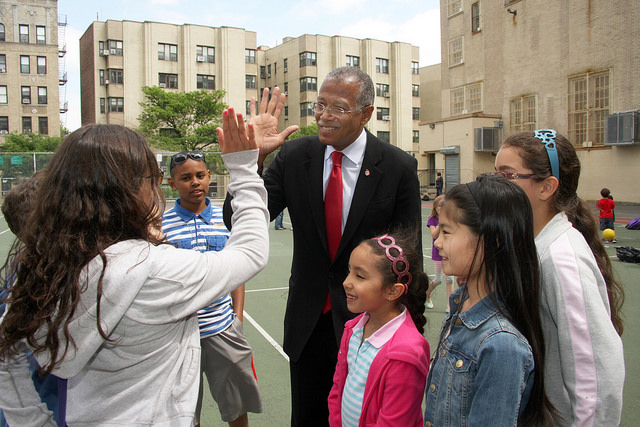 Robert Jackson, who has education as one of his major platform issues, meets with students during his campaign for State Senator in District 31. (Robert Jackson Flickr)

As New York’s progressive population cheered for the results of the Sept. 13 primary election, the state’s Muslim community celebrated a different kind of victory. Robert Jackson became the first Muslim in New York’s history to win a district seat in the New York State Senate.

Jackson, a Democrat and former city councilman, said that it was the nearly 50,000 people in Northern Manhattan’s District 31 and the organizations who worked consistently throughout the campaign season, that made his win possible.

“I knew that the [blue] wave was in our direction and I was waiting for it to hit me and it hit me hard,” he said. “This year I received more votes than the total number of people two years ago and that’s mainly because of the fact that Donald Trump was elected President of the United States and all of these groups have risen up like beautiful flowers in the springtime.”

One of Jackson’s constituents, Sameer Shamsi, described the win as “breaking another barrier.” He said that Jackson’s track record has made him a positive role model for underserved and underrepresented communities throughout the state.

“It makes local government much more responsive to the community’s needs,” he said. “It gives that community a voice. It legitimizes the community. It’s very easy to marginalize a community when they have no representation.” 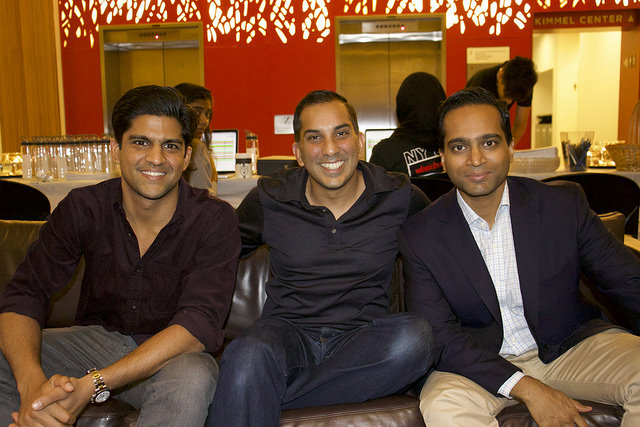 Prior to taking part in evening prayer in Lower Manhattan, Haroon Ismail, left, Sameer Shamsi, center, and Saquib Rahim, right, discuss their excitement to have a fellow Muslim represent them civically and hope to see other areas of the country follow suit. Photo by Li Cohen

Along with creating a more diverse government, Saquib Rahim, a Manhattan resident who is registered to vote in Florida, believes that Jackson’s win demonstrates how Muslims are getting involved in politics and that society has become more accepting of it. He believes that Florida and other states may be inspired by Jackson’s accomplishment.

“People like him pave the way for others to believe that they actually have a chance to both run and win and represent communities that, up to this point, have been underrepresented and underserved,” he said. “I think there’s nothing more American than diverse representation in government.”

Jackson plans to use his win to push for more affordable housing, education for students in families of all incomes and a single-payer healthcare system. He believes that being Muslim will simply add a diverse perspective to the state’s legislature, so they can better represent the makeup of their constituents. If someone, whether they are a fellow politician or a resident, were to have an issue with his religion, he believes they are looking at the wrong agenda.

“When you look at the entire district, the diversity of age, of race, of ethnicity, of religion, of sex, of gender, is all there,” he said. “The agenda is about change and is about diversity in the legislative body.”

Even though New York’s Muslim population is only about 3 percent of New York City’s total residents, the appreciation and push for Muslim inclusion in the government reaches far beyond that demographic.

Brooklyn resident Laylah Amatullah Barrayn said that having a Muslim senator allows an important and necessary perspective to enter legislation.

“When it comes to a faith like Islam, there’s one narrative about it and then there’s also elements of Islam in the media that are usually negative and one-sided,” she said. “I think it’s very encouraging, especially in a democratic nation like America.” 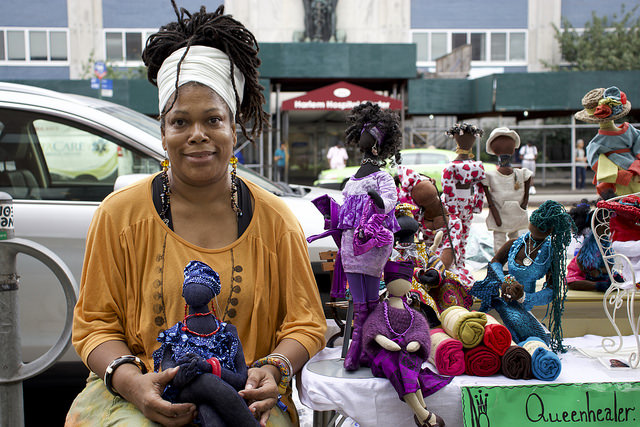 Regina Dale, who was born in and spent most of her life in Harlem, said that the world has seen a lot of changes in the past decade and that people are having to come together to make societal, cultural and civic progress.

“Each person’s religion offers them something different from everyone else,” she said.“The multi-mixture of personalities, of religious beliefs, of educational backgrounds, I think those are all the things that make a difference.If everybody had the same view, then everybody would be marching to the same beat.”

“… risen up like Beautiful Flowers in the springtime..,” beautiful quote! My faith in the American people has been restored! Inspiring article!