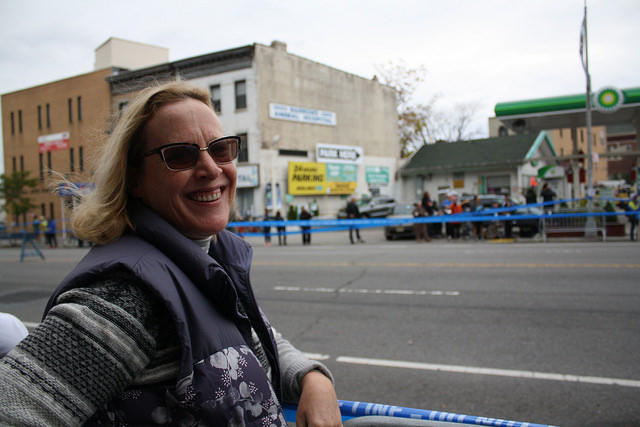 Jackie McMahon is all smiles as she anxiously waits in Bay Ridge for her NYPD coworker to run by in today’s New York City Marathon. Photo by Alexandra Zuccaro

Even before the first New York Marathon runner hit the track this morning, NYPD officers could be seen in Bay Ridge, Brooklyn lining the streets with caution tape and blocking off roads with their squad cars. As the crowds started to emerge around 9:30 a.m., additional officers were walking up and down the streets, trying to clear walkways and control the abundant excitement.

But the uniformed officials weren’t the only NYPD attendees at the marathon this morning. Many members of the NYPD were seen running in the race, with their supportive coworkers flocking to the sidelines to cheer them on.

Jackie McMahon, an NYPD employee, was one of these cheerleaders. She was more than happy to get up early to cheer on her comrades.

“I always enjoy watching the marathon,” said McMahon. “I have a sergeant who I work with who is running. I don’t know if I will see her in this huge crowd, but I told her I would be here.”

Once the race was in full swing, McMahon waved and smiled at all the runners who were sporting NYPD shirts “Way to go NYPD!” she shouted. 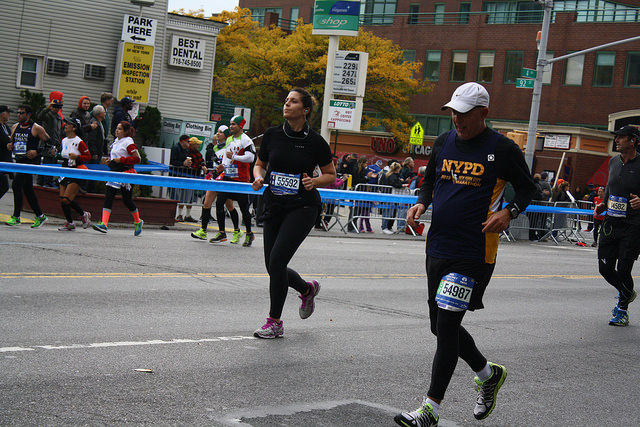 “My sister is handicapped, so I just feel very supportive towards the handicapped runners,”she said.

Although McMahon has watched past marathons all around the city, she now loves watching in her Bay Ridge neighborhood. The energy here is different she said.

“It’s not as big of a crowd as you would get in Manhattan, but the energy is very high because they are just starting out,” she said.

In Bay Ridge, the buzz was definitely alive, with runners stopping along the sides to take selfies with the viewers or high-fiving the kids sticking their hands out as they were held over the railing by their parents.

Bay Ridge spectators also made an effort to keep the runners pumped. While marathon runners trudged up the hill on 94th St, a group of locals, including a few NYPD officers, chanted “Welcome to Brooklyn!” Some of the runners waved to the officers and cheerers in response, and used that hype to make it around the upcoming turn onto 4th Avenue.