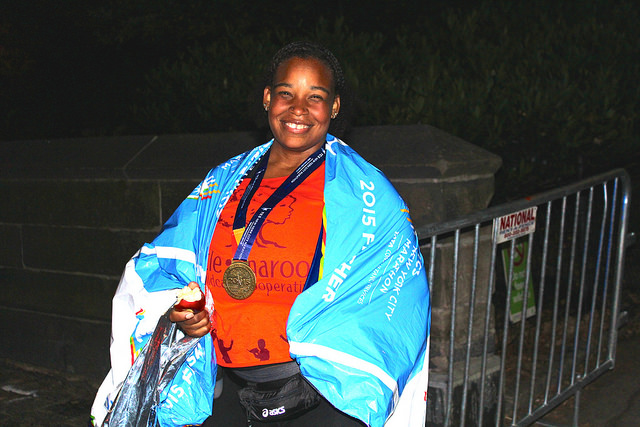 Sala Cyril believes that finishing the New York City Marathon is an achievement itself, despite being one of the last placers in the event. Photo by Eugene Y. Santos

A few months ago, school director Sala Cyril, 38, took an opportunity of a lifetime. She would train and run this year’s New York City Marathon for the benefit of her institution, the Little Maroons Childcare Cooperative in Bedford-Stuyvesant, Brooklyn. It was the school’s 10th anniversary, and around $5,000 was crowdsources and would be given to Cyril when she finished the marathon.

With barely any marathon experience under her belt, she trained for only four months.

“I even had a concussion in the last two weeks,” she said. “I wasn’t able to train fully.”

More than the physical training, Cyril of Bedford-Syuyvesant said that she had to train her mind as well to strengthen her endurance.

Today, at around 11:00 am, Cyril found herself in the starting line. She put her game face on. She told herself she would finish the race no matter what.

“I just really pushed myself to do my best,” she said. “My family went out to support me. My colleagues went as well, so I wanted to show my loved ones that I could finish the race. This is definitely the most intense experience I’ve had in my life so far.”

The marathon, as Cyril put it, was challenging.

“I was slow and I took many bathroom breaks,” she said. “The water and energy stations even malfunctioned so it was hard. It even became discouraging after a while because there were less people cheering me on, so it was a matter of mental strength, too.”

But at the end of the race she was all smiles. She was greeted immediately by her loved ones. She took her hard-earned medal, and grabbed a marathon cape and goodies along the way. The race was officially over.

“I feel really successful and also tired,” she said, as she made her way out of Central Park. “I can’t join the NYC marathon next year as I wasn’t able to participate in the qualifying race for it. I do look forward to running in its 2017 edition, even if I’m not going to raise funds for my school. Next time, I just want to run the whole thing and just enjoy it better. There’s definitely room for improvement in my performance.”

For now, Cyril is happy to fulfill her commitment to Little Maroons. The school, which was established in 2005, aims to “reinforce” African education (ideologies, culture, and history) to black children, as a means of reminding them of their roots and nurturing their love for learning. The money that Cyril was able to raise will go to various educational endeavors, such as school supplies.

Cyril said the marathon gave her a fresher perspective on motherhood, as she felt like an inspiration to her daughters to keep pursuing their dreams no matter what gets in the way. She advised would-be marathoners to “not be afraid of being slow in the race because all you need to succeed are discipline and practice. The goal is to finish the race no matter what.”