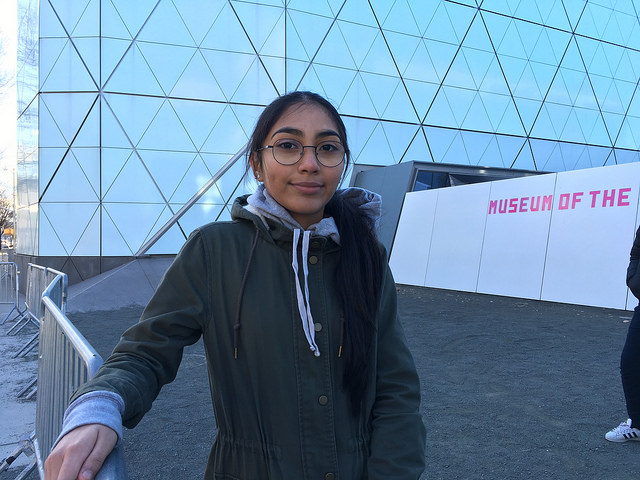 Tamara Morejon, 14, of Long Island City, in the side lot of the Museum of the Moving Image in Astoria, Queens on Jan. 30, 2017. Morejon was at the “He Will Not Divide Us” installation for her third time. Photo by Razi Syed.

Nestled between a brick-lined apartment building and pale grey office suites, an ever-changing group of teenagers and young adults softly chanted “He will not divide us” over and over again in the side lot of an Astoria, Queens museum yesterday..

“I’m here for my parents, who came here from Mexico,” said Tamara Morejon, 14, of Long Island City, standing beside the Museum of the Moving Image, where “HE WILL NOT DIVIDE US” is painted on the wall. “They’re undocumented; they don’t have the same benefits that immigrants have.”

Morejon said she was there for the third day in a row, usually staying for several hours on each visit, and that she intended to come back for as long as her parents lacked the rights of citizenship.

Since Trump was inaugurated, 11 days ago, performance artists Shia LaBeouf, Nastja Säde Rönkkö and Luke Turner have asked members of the public to stand in front of the text and chant, ‘he will not divide us,’ for as long as they wish. A mounted camera, located just below the text, livestreams the activity at hewillnotdivide.us

“Open to all, 24 hours a day, seven days a week, the participatory performance will be live-streamed continuously for four years, or the duration of the presidency,” reads a statement from the trio explaining their work. “In this way, the mantra ‘HE WILL NOT DIVIDE US’ acts as a show of resistance or insistence, opposition or optimism, guided by the spirit of each individual participant and the community.”

During an hour-long period beginning at 3 p.m.,around 20 people braved wind chill and temperatures in the 30s to participate in the exhibit. The number of people at any one time varied from four to 10.

The soft, trance-like chants in front of the text were periodically stopped as the chanters broke off into conversations with one another while standing on the sandy side lot where the words “one people, one love” and the shape of a heart were carved into the ground.

Harry Maria, 32, of Castle Hill, Bronx, was there for his second time, after a brief visit the previous week.

“It hasn’t been as busy as I hoped but the energy is amazing,” Maria said. “The main thing is, this gives us a platform to voice our opinions and make sure we’re heard.”

Maria said the view Trump and his supporters have on immigration to the United States were hypocritical.

“No disrespect to anyone,” Maria said, “but I feel that a lot of us when you look at yourself in the mirror — whether it’s first generation, second generation, third generation — no matter how far you want to go back: someone in your family was given the opportunity to come to this land, and work hard to better their life.” 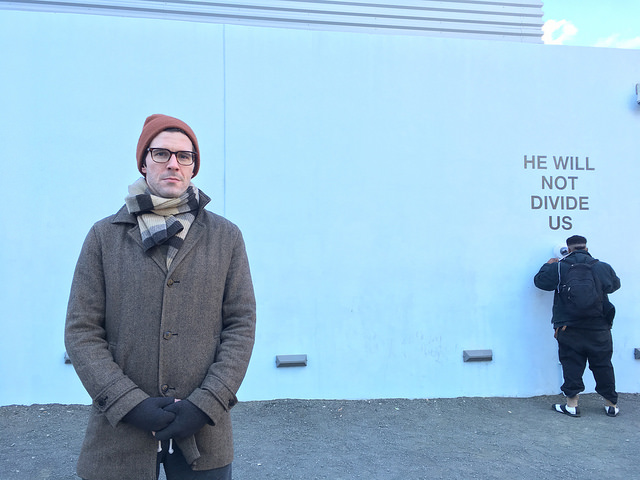 Christian Mansfield, 33, of Sunnyside, Queens, stands in front of “He Will Not Divide Us” in Astoria, Queens. Photo by Razi Syed.

Christian Mansfield, 33, of Sunnyside, Queens, said executive order freezing the processing of refugees and barring citizens of seven Muslim-majority countries from traveling to the United States was the action he felt he had to oppose most strongly. Mansfield said he was inspired, however, after watching a week-long string of demonstrations against the new administration, from the women’s march on the day following the inauguration to the spontaneous airport protests on Sunday.

“I’m only 33-years-old but this is the first time I’ve seeing anything like this,” he said. “So often people say, ‘Why protest? It doesn’t make any difference.’

“But I remember the fight for gay marriage — I protested for equal rights, I marched after Prop 8,” Mansfield continued. “Now gay men and women can get married and I have a husband, so I’ll always love seeing people fight for what they believe in.”