No Dream Act in NY budget 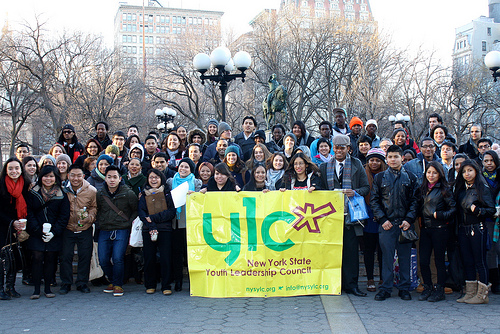 Immigrants rights activists and legislators faced a setback last week in the push for the New York DREAM Act, which would give financial aid opportunities to undocumented youth, when the act failed to be included in this year’s $135 billion state budget.

The bill’s failure to be included in the budget stemmed from a discrepancy between the state’s two legislative bodies, the assembly and the senate. The State Assembly, which currently has a Democratic majority, had already included $25 million in its budget for the New York DREAM Act. However, the Senate never included it in its version of the budget.

“In the Senate it’s a much more complex situation right now,” said Katherine Tabares, a youth organizer for the not-for-profit Make the Road New York. “Republicans are not in favor of it and they, together with the independent Democratic caucus, form the majority.” There are currently 22 sponsors of the bill in the 63-member Senate.

Since it was not incorporated into the budget, the bill’s only chance of being enacted this year would be if both houses pass it by the end of the legislative session in June. The bill would make New York the fourth state to pass a DREAM Act granting undocumented students access to state funded financial aid. Approximately 65,000 undocumented students graduate from high school, but only 5-10 percent of undocumented high-school graduates go to college, according to the Immigration Policy Center.

Assemblymember Francisco Moya introduced the bill in its current form in mid-January alongside Assembly Speaker Sheldon Silver and Higher Education Committee Chair Deborah J. Glick. The bill would give access to the state’s Tuition Assistance Program (TAP) to qualifying undocumented youth, also establishing a DREAM Fund Commission to raise private funds for scholarships for children on immigrants. To qualify for the bill, undocumented students must have attended a New York high school for at least two years, graduated or received a GED, enroll in a college or university in the state of New York, and meet the requirements for TAP.

Senate Republicans in opposition to the bill have taken issue with its use of public funds. Senate Majority Leader Dean Skelos said legislation establishing a private Dream Fund instead had a possibility to pass this year.

“I think there is support from people that tend to be a little bit more conservative,” said Skelos at the Crain’s Business Breakfast Forum in February. “As long as it’s private money put into the fund.”
But Tabares said there are already private funds for undocumented students, and that they do not go far enough to meet their financial needs.

“Regardless of whether national immigration reform is passed or not, the time that it would take for an undocumented youth to actually receive financial benefits from the federal government will be up to 14 years, so many students will have already graduated,” said Tabares, who is also a second semester student at LaGuardia Community College in Long Island City, Queens. “The NY DREAM Act needs to pass this year because there are so many youth right now who can’t attend college.”

Governor Cuomo, who has come out in support of a federal DREAM Act, has yet to voice his support for the state sponsored legislation. Legislators in support of the bill have recently been more vocal in pushing the governor to take a stance.

“On behalf of all Dreamers, I am urging Governor Cuomo to again bring to bear his great courage, considerable political skills and extraordinary leadership abilities in getting something big, important and meaningful done. And make no mistake: Immigration reform is important and most certainly needs to get done,” said cosponsor Senator Jose Peralta in a statement last week.

“If Cuomo came out in support, many of the Senate Republicans in a neutral position right now could change their minds,” said Taberes. “But he hasn’t been vocal about it, and there continues to be opposition and a lot of doubt over the bill.”

Other undocumented students continued to hope the bill would pass while they were still in school.
“I feel behind compared to my citizen friends who have financial aid,” said Viviana Sanchez, a student at York College in Jamaica, Queens. “There are thousands of Dreamer students in New York State it would mean a lot to them, to parents—to my parents—and to myself.” 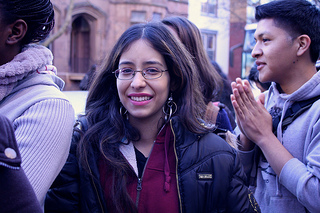 Viviana Sanchez, 19, a student at York College in Jamaica, Queens who just received deferred action said her inability to receive financial aid is forcing her to attend school part-time. Photo by Daniella Silva.

Sanchez, 19, added that her financial situation and inability to receive state financial aid have kept her a semester behind and forced her to attend college part-time.

“It’s been very hard for me to get through school, I try to work to supplement it with a bit of my parents help, but it’s still taking longer than it should,” she said.

Sanchez on the financial burden of being an undocumented student
sanchez1

Tabares said the key to having the bill pass was continued activism throughout the state.
“I personally have seen the growth in the last three years about the community being more vocal and supportive about it,” said Tabares. “Undocumented youth have been fighting for the NY DREAM act for years, you just can’t give up until you get what you want.”

Last month nearly 200 students and activists joined the New York State Youth Leadership Council, an organization that represents undocumented youth, in an organized trip to the state capital calling on legislators to enact the NY DREAM Act. The group completed scheduled visits with 59 legislative offices and in addition to those planned visits, also completed drop-in visits with 31 additional legislative offices, according to Gabriel Aldana, a member of the NYSYLC.

As a result, the group had 12 new co-sponsors, said Aldana. 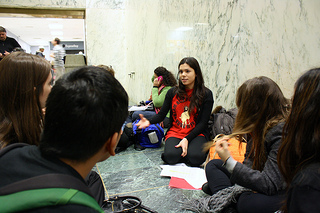 Maria Jaime, 21, co-coordinator of the Westchester chapter of the NYSYLC, addresses her team members before meeting with state legislatures regarding the NY DREAM Act. Photo by Daniella Silva.

“Lobbying like this is a crucial part of passing a bill, focusing on activism and getting out in the streets,” said Jaime, a senior at Manhattanville College. “At the end of the day politicians are voting on the bill, but we give them that power as constituents.”

According to a report by the NYSYLC in conjunction with NYU Law School’s Immigrant Rights Clinic, the cost of extending the Tuition Assistance program would be approximately $17 million per year.

“If the New York State DREAM legislation were financed through the state income tax, it would represent 87¢ per year—less than the price of a single donut—for a median tax payer,” said Jaime.

Assemblymember J. Gary Pretlow, a co-sponsor of the bill following the NYSYLC’s trip to Albany, said he looked forward to the bill coming to the floor.

“This is an issue that has been before us for a number of years, I think it’s of the utmost importance that everybody be given the opportunity in this country to advance themselves and move on,” he said.

Pretlow on the importance of passing the NYS Dream Act

Jaime said overall she felt the visit was a success, and that the most rewarding aspect was seeing others in her team share their stories with legislative staff.

“Seeing how each time you tell a story it gets more a little more personal, that’s great for their own growth throughout the day,” she said. “Last year when I came was the first time I shared my story with politicians as well, I didn’t tell anyone but I was really scared, but once you say it out loud it’s so empowering.”

Maria Jaime on putting a face to the issue
mariajaime

Sanchez, a member of Jaime’s team, echoed the sentiment.

“Of course it’s daunting to tell a politician your story, they’re the people who make the laws, the people who decide if I stay here or not, if the New York DREAM act passes or not,” she said. “But it’s such a big accomplishment for me.”