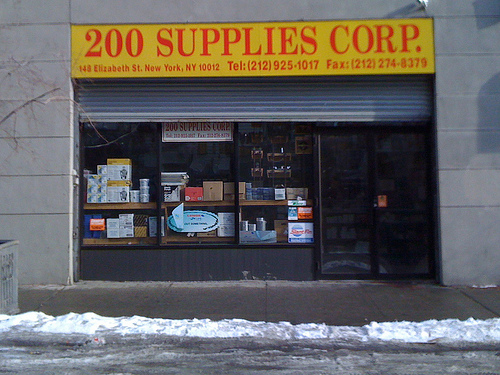 Bad weather is a boom for business at 200 Supplies Corp. in Little Italy. (photo by Meredith Hoffman)

On most days, Little Italy visitors might race past the pipes and toilet “flappers” of the plumbing and electrical store 200 Supplies Corp. and head straight to Café Roma 2 for a mouthwatering raspberry tart. But in New York’s rattling freeze, the café is dead, the street unbearably cold and the plumbing shop a neighborhood hot spot.

The staff of 200 Supplies Corp. need not pray today to the 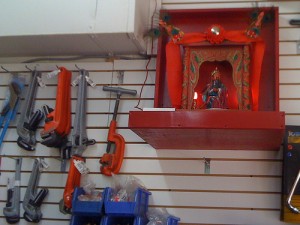 hung on the store wall for business luck. The brutal winter is the shop’s good fortune, as maintenance men rush to the counter with lists of demands.

Dominick Caputo, a plumber from Piping Hot Plumbing Company, said this January’s weather is the worst in 10 years, and remembered traipsing around the city taking emergency calls.

After nearly “a lifetime in the business,” he said appliances are now more poorly made, so “something breaks in a week, in a month.”

Another plumber, Lawrence Dowd, bought pipes for a building on 28th Street whose dysfunctional boiler caused tenants to “threaten the owner” and to complain they’d caught pneumonia.

“The most important thing I do? Keeping people hot,” he said, huddling beneath his floppy fur hat. After shopping at 200 Supplies Corp. for years, he considered the store essential to work.

But if more snow falls today— AccuWeather.com predicts at least 7 more inches by nightfall —the shop may close for a day, which could leave plumbers searching for another store.

Eric Chen, 35, who has commuted to the store from Staten Island for 10 years, said if “there’s a lot of snow,” he won’t come to work tomorrow. He called the store “home” and the other staff his “brothers,” but he said dangerous road conditions might prevent him from driving into the city.

During the snowstorm this past month, Chen closed the shop for a day. When he returned, he found the automatic gate frozen shut, so he pried it open by himself. As soon as the shop reopened, the plumbers returned.

But when Brian Lo, 34, a salesman at 200 Supplies Corp. he learned of the imminent snow, he quickly spoke of his long bus commute from Queens.

“I don’t think I’m coming to work tomorrow,” he said.