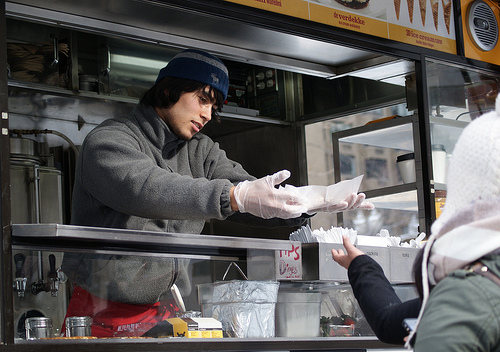 Ihityor Murodzoda, 21, of Brooklyn operates a Waffles and Dinges cart in Central Park on January 25, 2010 and claims that bad weather is bad for business. In the winter months Murdoza says the business struggles because people are not interested in eating outside. (Photo by Jessica Bell)

Nobody wants to go to Central Park and eat out of a food cart in the snow and freezing cold.

Ihityor Murodzoda, 21, of Brooklyn, is braving his first winter as a food cart operator, and it has not been easy.

“When it’s cold and snowing, nobody comes to Central Park,” he said. “It’s very bad for business.”

According to AccuWeather.com, more than 7 inches of snow are expected to fall on New York City today, which could mean another slow afternoon for East Midtown food vendors.

Murodzoda works a Waffles and Dinges cart at 59th Street and Fifth Avenue, the southwest corner of Central Park. He started last May and had no idea that the weather would affect his job so dramatically.

“With the weather like this sometimes it is too much and we have to stop business,” Murodzoda said.

Mohamed Mounir, 26, of Hell’s Kitchen, has owned and operated his own hotdog stand on the corner of 60th Street and Fifth Avenue for the last four years.

“I check the weather every morning on the Internet and decide to come out or not,” he said. “Last week I only worked one day because of the weather.”

Mounir chooses not to work if the temperature is below 30 degrees or if the snow is too high for him to move his cart through the streets.

But Murodzoba is in the park no matter what the weather brings.

“It is hard,” Murodzoda said. “Sometimes we have some regulars ask where we are if we decide to close, but most customers only come if they go to the park.”

Murodzoda doesn’t have a problem keeping warm. Heat from his waffle iron and coffee maker warm the inside of his cart. But the situation is different for Mounir.

“I bought good shoes and wear too many clothes,” he said of keeping warm. “If I go inside the customers go away. If I’m not here they find the food somewhere else.”

While food vendors say standing in the cold for several hours a day is unpleasant, the biggest problem comes in the days after a large snowfall. This winter, Mayor Bloomberg has faced criticism for not adequately preparing the city for the high levels of snowfall.

“During the storm the day after Christmas I couldn’t open and for four more days after that,” Mounir said. “The streets were not clear and I couldn’t park my cart.”

Heavy snowfall is frustrating for Mounir and other food vendors because they cannot work and they can’t clear the snow themselves. Both Mounir and Murdozoda said during the winter months the loss of pay and customers is difficult and substantial.

“We want to work,” Mounir said. “We all have rent and bills and families. The weather makes it hard though.”