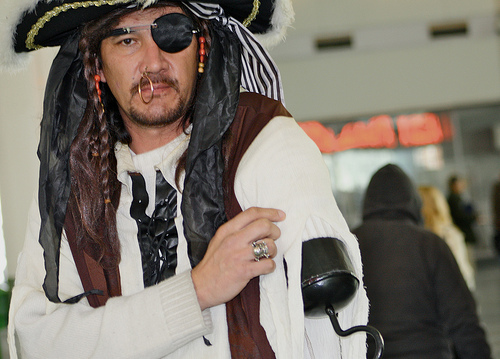 John Raimond displays the hand-made hook he uses in lieu of a more traditional prosthetic attachment in Whitehall Ferry Terminal in Manhattan Raimond, who lost his arm and eye in a car crash two years ago, wears the hook while posing for pictures in in the heated terminal during the coldest winter months. (Meredith Bennett-Smith / Pavement Pieces).

During the winter months, Raimond, 40, of Staten Island, greets ferry passengers here three to five days a week. Posing for pictures with tourists and locals alike, Raimond’s pirate get-up springs from events that hit closer to home than the average street performer’s costume.

After a heavy night of drinking and a fight with his girlfriend in May 2009, Raimond blacked out behind the wheel and ran his vehicle into a ditch. Nine days later, he regained consciousness in an intensive care hospital bed.

“I opened my eyes and I don’t have my left arm,” Raimond said.

While Raimond took the loss of his limb in stride, the loss of his job was harder to swallow. Unable to continue welding commercially, he stumbled across his current profession while watching the film Pirates of the Caribbean.

One self-welded hook prosthetic and $400 worth of Party City apparel later, the Whitehall Ferry Terminal Captain Sparrow was born.

But Raimond, who has an official permit to act as a pirate, is not the only performer to frequent the warm confines of the Whitehall Terminal. The entryway also plays host to a tin man and golden statue, according to Maria Baluena, of Staten Island, a cashier at one of the terminal’s food counters.

From behind a counter stacked with pizza rolls and hot pretzels, Baluena watches the waves of commuters pass by the various performers as well as a tight-knit contingent of homeless, the terminal’s semi-permanent population.

“[The homeless] all sit over there,” Baluena said, gesturing to a corner of the terminal far from the eyes of the police officers and drug sniffing dogs, yet close to the public bathroom stalls. “There’s the fart guy he farts a lot, and Ritchie, and the Russian guy who repeats the same thing over and over again, and the Pepperoni Lady.”

The group of twenty or so swells during the winter months, Baluena said, while going largely undisturbed by the terminal staff unless they cause a disturbance by throwing food on the floor or feeding the pigeons.

While the homeless keep a low profile, performers who share the warm terminal space with them often attract onlookers from the departing and arriving crowds.

“Excuse me, Mr. Pirate,” said the young woman, interrupting Raimond’s statuesque posing and nudging her toddler forward. “Can he take a picture with you?”

“Argh!” Raimond replied smiling, bending down on one knee, but still managing to dwarf the little boy.

The two walked away without depositing anything in the tip jar hanging from the pirate’s rope belt. But Raimond said he derives much more personal satisfaction than actual revenue from his stints as a swashbuckler.