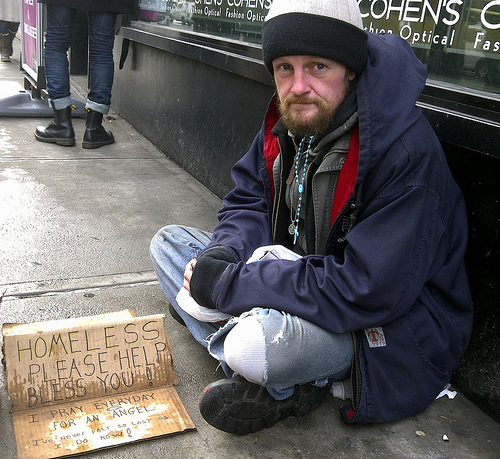 Paul Santo sits on the sidewalk on Broadway in the East Village, to ask for money from passersby. After losing everything to his ex-wife in a divorce, Santo is now homeless and living on the streets of New York City. (Photo by Jasmine Brown)

Paul Santo sat cross-legged on the sidewalk of the East Village, staring down at an empty cup, looking up only when a passerby put money in it. After losing everything to his ex-wife in a divorce four years ago, Santo is now homeless and living on the streets of New York City.

Yesterday’s partly sunny skies and temperatures in the mid-30s were a welcomed break for Santo, who spends most of his days braving the elements and asking for spare change.

“Right now this is great because like the last four days have been like hell,” he said. “I will take this, this is like summer right now.”

According to a recent report by the New York Department of Homelessness, more than 37,000 people live in homeless shelters and an additional 3,000 individuals live on the streets.

After finding that he could not survive as a homeless person in Bridgeport, Conn., Santo, 41, moved to New York City for its homeless resources.

But this winter has been particularly brutal for Santo, who manages to stay warm by wearing a hat and at least five or six layers of clothing. He has become resourceful when it comes to finding places to stay out of the cold.

“We usually try to go in the subway but the cops are cracking down on that so we can’t,” said Santo as sat on Broadway between 13th and 14th Streets yesterday. “So what we try to do is some of these buildings have like a hole in the ground that is like a vent for like a laundry room and usually throw off heat and a couple of us will get under a blanket and try to catch that heat and just survive.”

At night, Santo tries to avoid homeless shelters. He uses them only as a last resort.

Santo hopes the money he made yesterday will help him weather today’s storm.

“You try to get as much money as you can before so that way it carries you through the storm,” he said. “And that way I can go in(side) someplace and I don’t have to worry about it. Sometimes, if that doesn’t work out that way, I will have to be out here working during the storm.”

I played in bands with Paul Santo, aka Stevie Starr, for 10 years, and I would like to talk with him. Please contact me concerning Paul’s whereabouts, or how I may get in touch with him. This means the world to me. Thank you so much.

I see Paul all the time sitting near a restaurant called “Cosi” on Broadway close to E 12, or E13 St, in NYC. I see him there every Monday to Friday. Hope that helps.

This is hardcore man. Homeless people are humans. they didn’t start out homeless, but catching bad breaks they ended up turning to drugs and alcohol to survive.