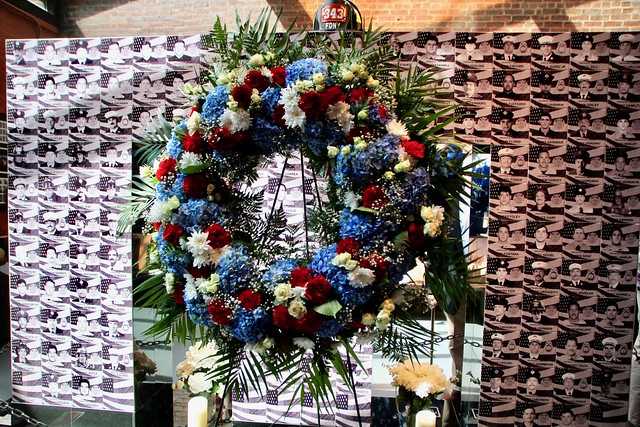 The 9/11 memorial at NYC Fire Museum is a permanent exhibition designed by Jude Amsel to commemorate the 343 firefighters lost on September 11, 2001. The center of the room is a memorial made of black marbles and tiles with the names and pictures of the individual firefighters. Photo by Shiyu Xu

Held inside the museum’s 9/11 permanent memorial room, the service contained the presentation of the colors, singing of the national anthem, invocation, remarks and laying of the wreath.

“I encourage all of you to spend some time and think about the choices they had to make,” First Deputy Commissioner of FDNY Laura Kavanagh said in her speech. “Not only did they make the ultimate sacrifice, but they really left behind the foundation and legacy to save people’s lives.”

Housed in two adjoining rooms, the 9/11 memorial room serves as the first permanent memorial for the firefighters lost during the attacks. In the center of the exhibition stands a black marble and tile memorial with the names and images of each firefighter.

The exhibit also includes used tools and items recovered from the Ground Zero, a timeline and media coverage of 9/11 events, an interactive computer station and images of national tributes to the FDNY. 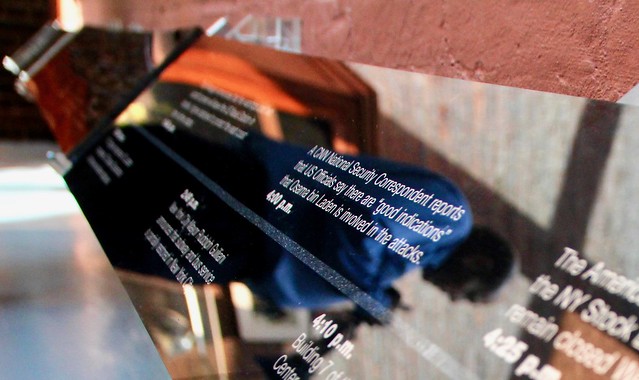 Within the 9/11 memorial at NYC Fire Museum, a timeline of September 11, 2001, is displayed chronicling the tragic events happened during that day, along with the responding rescue and recovery efforts. Photo by Shiyu Xu

Gary Urbanowicz, director of the NYC Fire Museum, gave his condolences to the past and welcomed the visitors who came to the museum to pay their respect.

“This memorial is a very special place for all of us,” Urbanowicz said. “Those heroes turned words into actions and that inspired me to make our commitment to never forget.”

For those who share the haunting experience, visiting the memorial has become their annual routine.

Merill Resnick, 72, who used to work a few blocks away from the Twin Towers, recalled his memory of this day 18 years ago.

“I was working, watching the news and constantly going back to the window to see what was going on,” Resnick said. “I remember when the second tower collapsed, I looked out of the window, and there was nothing there. It took around 10 minutes for the smoke to reappear again. For me, it was a haunting experience.”

Resnick witnessed the firefighters as first responders going into the unknown. He said that he has been in this room many times, and “each time it becomes more and more heartening.”

“I just noticed today that this room is actually an addition to the museum,” Resnick said. “It’s beautiful, but it’s the addition I’d rather not see.”

Former director of the museum, Judith Jamison, 78, also pays a visit to the memorial every year. For her, the character of the firefighters is something she finds “absolutely amazing.” 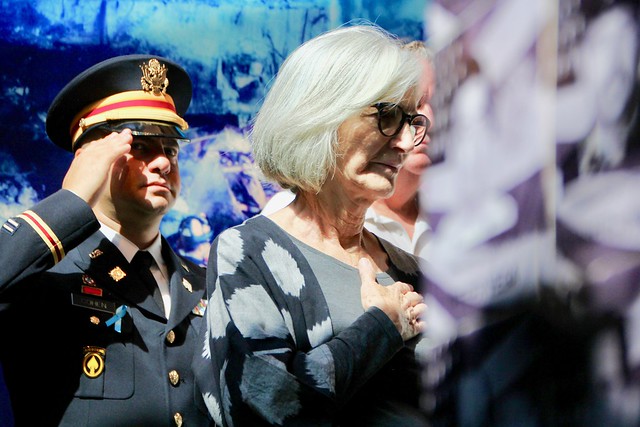 Former Director of the museum Judith Jamison, center, pays her condolences during the invocation for the 9/11 memorial service at the NYC Fire Museum on September 11, 2019. Photo by Shiyu Xu.

“The best thing about the museum is to talk to the firefighters who have volunteered to work here and get their stories,” Jamison said. “It’s inspiring to work with people like this, and it’s inspiring to the country to know what happened down 9/11.”

Jamison also said that after retiring from FDNY, many volunteered as docents in the museum to help educate the public.

A new addition to the museum, a survivor tree recovered from the 9/11 attack, was planted back in June to serve as a tribute to the lives of 343 firefighters and the 200 that lost their lives from 9/11 related disease and illness.

“The tree is a tribute and reminder for all of us to never forget,” Urbanowicz said.