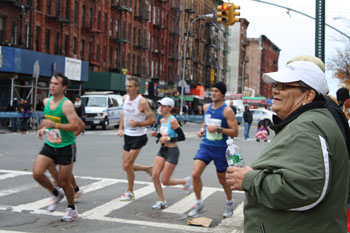 Nydia Nieves stands in front of the Mitchel Housing Projects in the South Bronx every year to cheer on the marathon runners. Her shouts of “Go baby, go!” and “You can do it!” could be heard from across the street.

“I can’t miss this,” Nieves said in Spanish at the New York City Marathon on Sunday. “It could be cold or raining, and we’re standing here, shivering, trying to encourage them to keep going.”

Nieves is a marathon regular. She has been at every New York City Marathon for the past 15 years. Most of that time, she has been a volunteer handing out water to runners passing by. This year, however, health problems stood in her way.

“I have arthritis in my knee. It hurts too much, so I can’t stand for too long giving out water, but I can still cheer. That ain’t going to stop me!” she said with a laugh. “We’ve got to let the runners know we support them.”

Nieves, a Puerto Rican native, was just one of hundreds of Bronx residents cheering on the runners. The marathon gives residents a chance to come together for something that puts a positive spotlight on the Bronx, Nieves said.

“It gives us something to cheer for at least once a year. It takes a while for people to come out because it’s cold, but little by little it gets full,” she said. “This day is special for all of us in the community. I feel more energetic and happy when everyone is here together.”

After more than a decade of watching the marathon, Nieves says there is little that can surprise her, but there is plenty that she finds inspiring and entertaining enough to keep coming out.

“Every year it’s the same routine. The band sets up over there,” she said pointing across the street. “And every year I stand here in my spot. I do it because I like it, because it gives me a chance to give something back to the city. Plus, it’s fun.”

Of all the things that make the New York City Marathon unique, such as runners in costume, it’s seeing others accomplish their goals that gives Nieves the most satisfaction.

“Sometimes at around five or six, way after the other runners have gone, you see a few of the older people running by. You can see they are struggling,” Nieves said. “I shout the loudest for them.

Thanks for your very informative post, I have bookmarked your site, thanks much!