NYC Marathon: At Mile 20, The Bronx 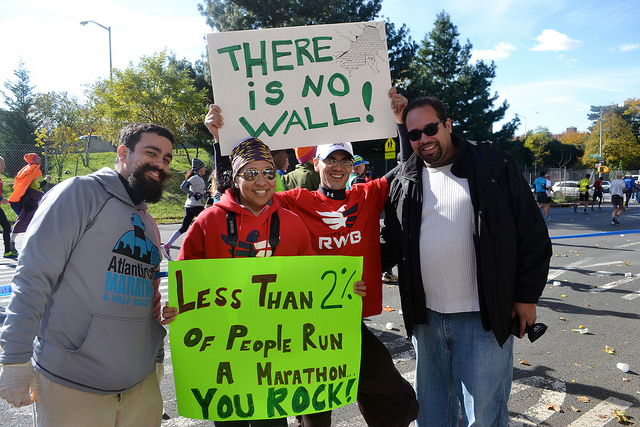 Vicky Almendarez and her group show their support with signs at the TSC NYC Marathon in The Bronx. Photo by Christina Dun

A sea of neon colors and sweaty smiles make it past the mile 20 mark in The Bronx, with J-Lo’s “Jenny From The Block” fittingly pumping through the speakers on Alexander Avenue.

Getting to mile 20 is a big deal. The Bronx is known for being one of the most tiring spots in the TCS New York City Marathon, with only 6.2 miles until the anticipated finish line.

With music at every block and the community showing their support, the high energy from bystanders was contagious. Bronx resident Vicky Almendarez cheered from the sidelines, handing out slices of oranges to the perspiring runners.

“It’s mile 20. Everybody is in Manhattan or Brooklyn, but this is The Bronx. This is almost toward that point where you just want to give up, so we want to give them all the support that we can,” she said. “We’re also from The Bronx so we want to represent our borough.”

The marathon brings out all types of people, ranging from tourists to local passersby.

“It’s a whole family affair,” said Almendarez, 35, who brought along her fiancé, her fiancé’s brother and a close friend.

Braving the cold, Almendarez and her clan were supporting Team Red, White & Blue (Team RWB), a nationwide organization that helps veterans acclimate back into society, through a variety of activities, including triathlons, social gatherings and other fitness programs.

“It takes a lot of courage to do this and as a runner, you need all the support you can get to get you through those 26 miles,” she said. “It means a lot when people are out here cheering you on.”

She said it’s great to be part of such a tight-knit community.

“Only less than two per cent of the American population does marathons, so you figure you’re part of the elite and you feel good,” she said. “You start to meet friends and train together and it’s a great support system.” 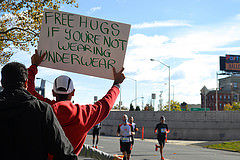 Carlos Almendarez holds a sign for the runners in The Bronx. Photo by Christina Dun

Almendarez has been watching the marathon on television for quite some time and has been making it out to support on the streets for the past five years.

This year, they held handmade signs and yelled words of encouragement to all the runners coming through. One sign even read, “Free hugs if you’re not wearing underwear.”

They got a lot of hugs today.