NYC Marathon: British chicken with a cause 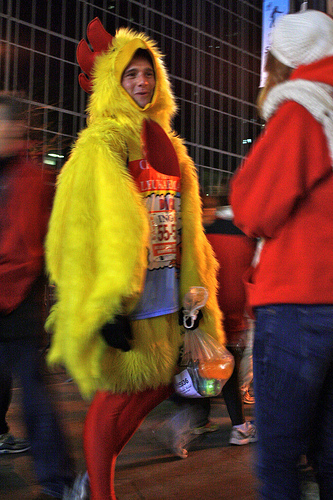 A British marathoner dressed as a chicken stops to greet supporters on the way to the New York City Marathon staging area in Times Square. Photo by Meredith Bennett-Smith

A giant yellow chicken walked briskly down Sixth Avenue, surrounded by New York City Marathon runners. They were all heading to the bus and the start of the race in Staten Island.

The chicken, identified by his racing bib as Dick, did not get far. As he turned toward the library, he was hailed warmly by a trio of red-sweatered men and women — Ben Twyman, Fiona Judge and Claire Robinson — standing beneath a giant blue, yellow and red flag. The logo of their organization, Children With Leukaemia, was emblazoned prominently on sweaters, a banner and a chicken alike.

Dick, like the more than 7,400 other entrants running the 40th annual ING New York City Marathon for charity this year, was not simply attempting a 26.2-mile feat of strength. With each feathered step, the London native raised more money for leukemia research at facilities throughout the United Kingdom and the U.S.

“(Dick’s) a great guy,” Fiona Judge said, smiling, as she watched the chicken get swept up in the crush of runners pushing toward the buses ahead. “I think he wears (the suit) just because he has one.”

The three had been standing on their corner since 5 a.m., attempting to greet and personally wish luck to the 75 Britons running Sunday under the Children With Leukaemia banner. Officially called the Mr. Men and Little Miss Team, the team is named after iconic British cartoon characters Mr. Tickles and Little Miss Giggles.

Collectively, Ben Twynum said the organization hoped to raise $100,000 for the charity, which was founded in 1988 by the family of Paul and Jean O’Gorman. Both siblings fell victim to leukemia before the age of 15, and moved by their story, Princess Diana helped to personally establish and inaugurate the charity. Road races comprise a lion’s share of the group’s fundraising efforts, with its website listing over a dozen team events, at both U.K. and U.S. locations.

As other Mr. Men and Little Miss team members stopped by the flag, the trio greeted them with handshakes, grins and gratitude. “Have you got a poncho with you to keep warm?” Twynum asked each runner in turn.

The group of self-described cheerleaders would soon be moving from its post to a new vantage point race side, Twynum said, situated near the intersection of 61st Street and First Avenue. At this turn, the main pack will just have crossed the exhausting Queensboro Bridge, signaling their entrance to Manhattan and mile 16.

As the volume of runners tapered off around 6:30 a.m., Judge set off on a mission to seek out some well-deserved coffee. With the race start still more than two hours away, the group was going on its second hour standing in the cold.

Just another day on the job, Twynum said.

“Lots and lots of our runners have been directly affected (by leukemia),” Twynum said. Some are relatives of children living with the illness while others are survivors themselves.

“You get to meet some incredible people,” he said. “Ordinary but incredible. It really makes your workday worthwhile — makes you want to go the extra mile, if you’ll pardon the pun.”