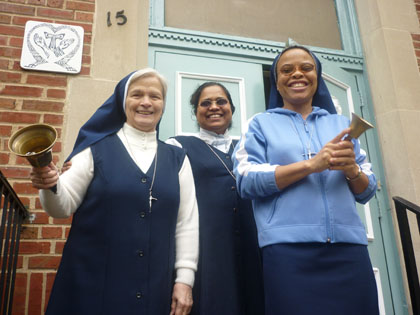 Sisters Catherine Eugene, Salomy Thomas and Leonie Therese stood on the steps of their convent, ringing bells and shouting encouraging words to the runners who smiled, waved and cheered back.

“People come up and take pictures with us. They say ‘thank you, thank you!’ and they keep running,” Sister Eugene said.

Each of the Sisters has been a part of the convent for more than 20 years. They have been bringing joy to the marathoners ever since they arrived.

The services these Sisters offer stretch beyond ringing bells. In past years, they have given away water and candy to tired runners and opened their doors to anyone needing a quick restroom break. And prayer has always been something they’ve offered.

“One year, someone fell down, and we got our jackets to lay over him and prayed,” Sister Thomas said. “In case something like that happens, we are here for them.”

The Sisters also set up shop on the convent steps each year to recruit people to join the church. They don’t do it in the conventional way with brochures and drawn-out spiritual advice, but instead by ringing bells, being in good spirits and always making lots of noise. Although none of the runners have officially joined, they still believe their work is important, they said.

“A lot of people have been inspired by us,” Sister Thomas said.

The Sisters said they also enjoy staying in high spirits for the runners because it is nice to see so many people come together to achieve a goal. This year, there were more than 42,000 participants, which the Sisters described as “shocking.”

“It’s so beautiful to see something like this, that people care,” said Sister Eugene. “They all have smiles on their faces. They are all so happy and really enjoy it.”

Although none of them has ever taken part in the race, each has given it some thought.

“I would love to run if I was in shape to do it,” Sister Therese said with a laugh.

A close friend of mine is a marathon runner, so I understand how important people like these three women are. God bless them.