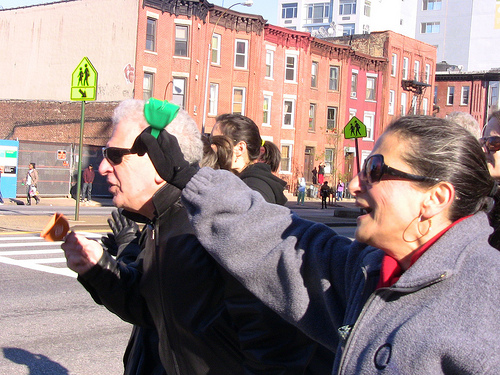 Amid the clamor of cowbells, marathon runners raced down Fourth avenue in Gowanus, Brooklyn, today.

More cowbells clanged in celebration from every direction to welcome the runners.

Workers at a nearby Time Warner Cable booth handed out cowbells, and spectators hurried to get them.

“I’m getting hoarse already,” said Dan Fox, 63 of Sherman, Conn., who was waiting with his wife Lisa to see their son run by. “I love it — New York is exciting no matter what, and it’s just so much fun to cheer everyone on.”

Even though their son Louis Fox, 40, of Brooklyn, had not yet begun the race, the couple was at Gowanus from the start to cheer on the wheelchair competitors.

Lisa held up her sign with one hand and her cowbell high into the air with the other.

“I think it’s wonderful and exuberating for them,” Lisa said. “It’s very humbling. It seems like a united effort. Everyone is out here to cheer everyone on.”

This was their son’s second New York City Marathon and third overall.

“He gets this from his father who races once or twice a night, to the bathroom,” Dan joked.

Down the block from the Fox family was Andrew Leonard, 41, of Gowanus, and his family.

“It is exciting to see all of these top competitors,” Leonard said. “Two colleagues from my office are running in it for Autism Speaks to raise money and awareness.”

Leonard’s children, Elias, 5 and Julian, 2, shook their cowbells wildly in the air as the lead women runners made their appearance.

Leonard laughed and added, “And my kids like to make noise.”

Originally from Tempe, Ariz., Leonard said he didn’t mind the cold. This was his family’s third year at the exact same spot at the corner of Eighth Street and Fourth Avenue.

“We live three blocks up,” Leonard said. “We can walk three blocks down from our home to see a world-class special event.”

The Leonard boys huddled together around a stroller and child’s bicycle, smiling and laughing. Their father looked at them affectionately.

“They love it,” Leonard began, “but I think they’d like it more if it were a little warmer.”

Music for the Marathon from Pavement Pieces on Vimeo.

This article goes beyond the runners, and takes it to the friends, fans, and family who are there for the runners, who cheer them on. Believe me if it was not for the people along the route pushing, and cheering the runners through the race, it would be a very dull run.