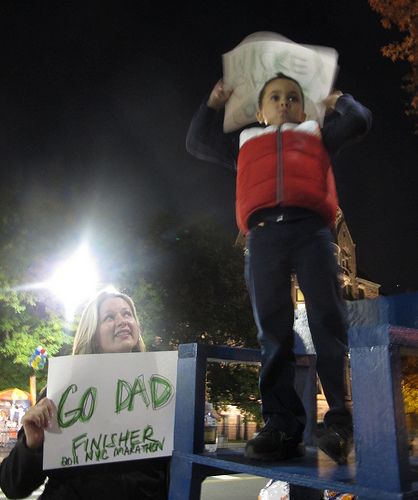 Sofia Naouia, 27, and her son, Christian Hunter, 5, await their father and grandfather, respectively, who was among Sunday's last runners in the annual New York City Marathon. Photo by Louie Lazar.

Carrying sacks overflowing with their belongings, the evening’s final batch of competitors – with only moonlight and faded streetlamps to guide their paths – limped towards their respective welcoming parties, like wounded soldiers returning from the front. Wrapped in blue and orange aluminum-looking “heat sheets” that floated behind them like capes, they walked amidst the roars of garbage trucks and the clanging metal of cleanup crews, while a cheerful male voice repeatedly boomed from a nearby speaker: 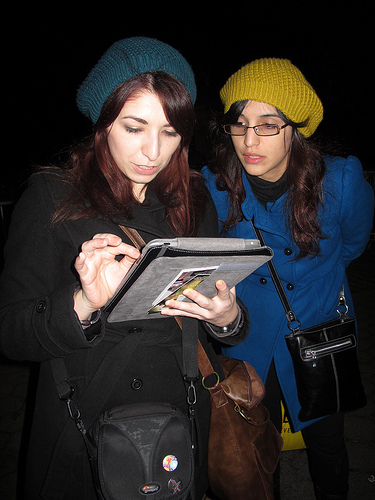 Vanessa Crooks (left), 27, and Carolina Sato, 23, try to locate their friend via iPad using a marathon app that helps track runners. Crooks and Sato, whose friend still hadn't appeared at the finish line by 8 PM Sunday night, are both from Panama. Photo by Louie Lazar.

Standing outside a security barricade at 72nd Street and Central Park West at around 8 PM Sunday, people initially held up signs like “Go Dad” and “Good Job Grandpa Mickey!” but many soon turned hungry and cold from all the waiting and shifted into survival mode, wolfing down hot dogs or bouncing in place. Others, like 27-year-old Vanessa Crooks of Panama, stared at an I-Pad, attempting to locate their friends’ or relatives’ whereabouts via a marathon website (a tracking chip, planted within the runners’ numbered bibs, was supposed to isolate runners’ geographical position). Crooks said she had “no idea” what had happened to her friend, who’d been having knee problems in the days leading up to the race.

“What has she gotten herself into?” lamented a shivering Crooks, who, unlike most marathon cheerleaders, had neither signage nor clothing aimed at pumping someone up.

“I wanted to get [celebratory] balloons but I didn’t even know where to find them,” Crooks explained.

Most of the late finishers had been relegated to walking the course – either due to cramping, or to more serious medical problems. The latter category would apply to Sofia Naouai, 27, whose 55-year-old father was still laboring in the dark park somewhere.

“He had a kidney transplant and is a diabetic, so this is major,” said a worried Naouai. “And his hand is swollen.”

Historically, last place finishers at the New York event have gone on to achieve esteemed status. Zoe Kolowitz, who completed the 2007 marathon in over 28 hours and finished several New York City marathons in last place, is now a motivational speaker and author who has appeared on CNN, The Today Show, and ESPN. She has multiple sclerosis, diabetes, and uses crutches to achieve forward motion. Bob Wieland, who lost both his legs in Vietnam, “ran” the entire 1986 marathon on his hands over the course of four days. Following a White House meeting with President Reagan, he too went on to appear on the motivational speaking circuit.

At approximately 9 PM on Sunday, admittedly exhausted security personnel abandoned their posts at the park’s exterior fence and allowed spectators access to the finish line, where, nine hours earlier, Kenyan speedster Geoffrey Mutai had – under a cloudless sky – shattered the marathon’s all-time record in front of a nationwide TV audience. Now, volunteers and several dozen men, women, and children awaited the evening’s final runner: a 36-year-old, severely-disabled Venezuelan economist named Maickel Melamed, who’d started the race at 9 AM. The faithful, most of whom had flown in from Caracas for the occasion, waved Venezuelan flags, wore shirts proclaiming “Vamos Maickel” and clutched balloons featuring the same slogan. A television crew from Univision conducted interviews; the mood was electric. 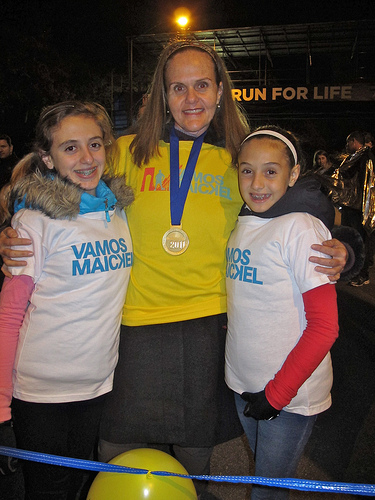 “[Melamed’s] a celebrity in Caracas,” said Juan Carlos Garanton, 42, a Venezuelan tax attorney who’d come to the park with his family. “He’s an inspiration for many people, let me tell you.”

Soon it was 10:30 pm, and Melamed still hadn’t materialized, but the faithful remained confident that he’d arrive soon. Especially Garanton, who noted that the famous Latin American holds a secondary profession in addition to economist.