NYC Marathon: Families cheer on the East Side 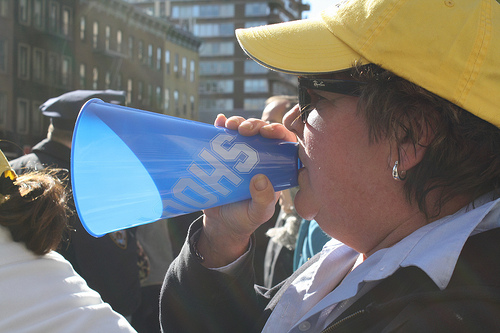 Jean Murphy, from Montgomery, N.Y., shouts through her bullhorn as she cheers for her daughter at mile 18 on First Avenue during today's ING New York City Marathon. Photo by Amanda Plasencia

Shouting through her blue bullhorn and holding a plastic cup filled with champagne, Jean Murphy of Fort Montgomery, N.Y., cheered for the New York City Marathon runners passing by on mile 18 near First Avenue and 80th Street yesterday. Her customized, bright-yellow baseball cap read “Team Sweet” in support of her daughter Sue Capetz, nicknamed “Sweet,” who ran in this year’s marathon.

Running the marathon is a family affair for Murphy. Other members of their family drove around Brooklyn, following Sue by car. They called themselves “Team Gypsy Cab.”

Murphy’s daughter ran her first marathon in Oregon, but she said there is nothing like the unique and colorful crowds of support in New York City.

“The people in Oregon just clapped politely, but in New York, it’s a crazy scene with bullhorns and noise makers,” Murphy said. “When the runners hear the cheers and the music, it really inspires them to keep going.”

The marathon might take place in the five boroughs of New York, but it also brings in some international cheerleaders on the sidelines.

Daniela Garza, 27, came all the way over from Monterrey, Mexico, to support her husband in his first marathon and first time in New York City.

Garza said her husband decided to run the race for her family.

“He stopped smoking and wanted to be a better parent,” Garza said. “My husband always said, ‘I run for you because I want to be with you until we grow old.’ ”

She staked her spot on the sidelines at 8:30 a.m., hoping her husband would see her behind the metal police barricades. She held a poster with a picture of her two sons and the words, “Vamos, tu puedes. We love you.”

“I think about all the families here supporting the runners. It’s so rewarding, and I’m proud to be here. It’s exciting to be part of the intense crowd,” Garza said.