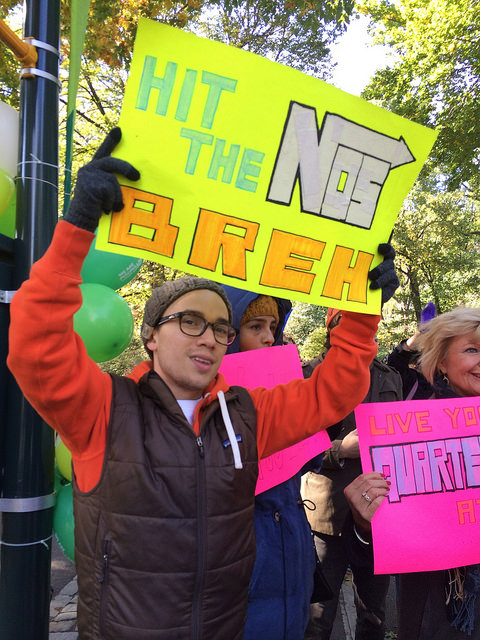 Ross Carlisle, of Brooklyn, holds up at sign at the 2014 TCS New York City Marathon to support his brother who is running the race. The sign references a line from the movie, “The Fast and the Furious” and is an inside joke between the brothers. Photo by Joanna Bouras

Ross Carlisle, of Brooklyn, searched through a sea of fluorescent runners, with his family in quest of his brother.

Stationed at the 24-mile mark of the 2014 TCS New York City Marathon in Central Park, this afternoon, they waved brightly colored signs as the family cheered and encouraged runners on. Carlisle, 28, was positioned to give his brother the final kick of adrenaline he needed to finish the race.

His brother Lee Carlisle, 30, was running to qualify for the Boston Marathon in April 2015. He has been trying to for several years.

“Its inspiring to see all the different types of runners from people with disabilities to senior athletes,” said Carlise.

With the predicted wind conditions runners knew that it wasn’t going to be a personal best race or a qualifying time race.

Temperatures were at a frigid 52 degrees and wind speeds up to 26mph. Officials said it was slowing down runners by five minutes on average.

“There’s no denying it was a beautiful fall day, said Carlise. “But for a marathon the wind was a bit much.”

Carlise said the most shocking aspect of the marathon was seeing competitors running without shoes on.

“Them some tough toes,” he joked.

Accompanied by his family, he had also been nervous they would miss his brother when large masses of runners came panting through at once. Dressed in a black hat, white shirt, and black shorts, they figured he would be easy to pick out in the sea of colors.

His mom, aunt, and sister had flown in from Ohio to join in cheering his brother on.

Carlisle thought it was heart warming to see all the fans cheering for strangers as a community, especially at a point where everyone is exhausted.

With reddened noses and jumping to stay warm, Carlisle shouted, “Hit the nos breh,” as he held a sign with the words colored on it.

The phrase is an inside joke between the brothers from the movie The Fast and the Furious.

Being at the 24th mile, Carlisle chanted encouraging words at runners that looked like they were struggling.

To give them a boost he cheered their names and offered high fives as they passed by.

This is Carlisle’s first time seeing the race up close.

“It’s usually just another NYC road block on my way to work,” he said. “It’s so nice to see how supportive and friendly everyone is.”

Carlisle and his family picked their race location based on good photo opportunities and where the after parties would be.

“Marathon parties complete with mimosas and bloody marys,” he said.

Carlisle has never participated in a marathon before, but is currently training with New York Road Runners to train for next years.