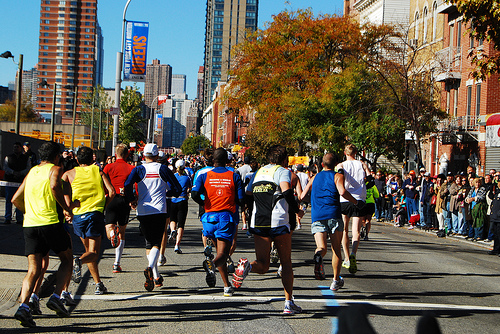 Some waved inscribed placards to support friends and families running in the race, and others cheered through megaphones or cupped hands. Booming music blared from a nearby speaker.

Cheers later turned into roars when throngs of runners flowed through.

“It’s moving to see the paralyzed people with disabilities and to see their mental strength to do that,” William Telesco, 43, of Long Island City said as he watched a group of wheelchair-bound racers pass.

For Gina Cazzola, 43, a Girl Scout troop leader who has led her students to support the event for years, the chill outside is a fair price to pay for seeing the runners.

“It inspires me,” said Cazzola of Flushing. She helped her Girl Scouts set up a water distribution table. The girls had blankets, folding chairs, coffee and donuts to help them bear the cold and hunger. “Donuts get us through. Donuts and coffee,” she said.

Eric Benaim, 32, a local Realtor on nearby Vernon Boulevard, set up a free food and coffee table out on the street for the crowds.

Jeff Grayzel, 47, of Morristown, N.J., drove more than an hour to Long Island City to see his friends in the race. His wife stood on a chair and waved a saying reading, “Go Rose City Runners! Yeah Dick, Kim, Mark.”

Grayzel had been playing a game of chess with one of his sons on the street, but when they heard the cheers, they took their plastic megaphones and rushed to the roadside, shouting, “Keep it up, guys! Keep it up!”

“The kids didn’t want to come today. Now they are having a lot of fun,” Garyzel said.

Many viewers sat on lawn chairs they brought to the crowded streets.

“I thought if it’s going to be a long time, it could be a little stress on the back to be standing the whole time,” said Brian McGovern, 52, a lawyer from Long Island, who had been waiting for his business partner to turn up on the street.

Standing next to his chair was a backpack of books and newspapers.

I was able to catch a glimpse of the runners in Long Island City during this past marathon. It’s really amazing to see the dedication and stamina that these runners have. I, personally, will never have the physical capability to run for that long. Props, marathoners!