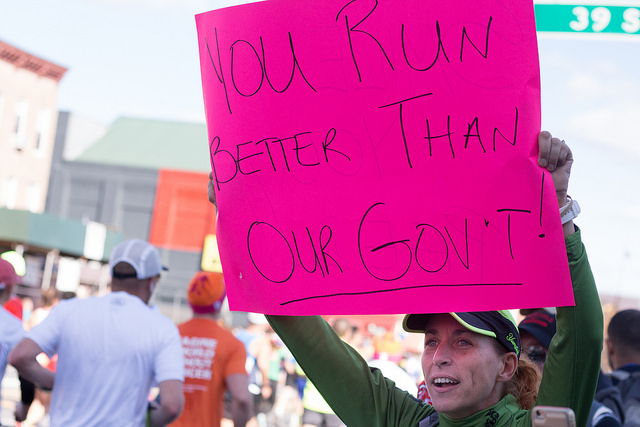 Ellen McCann, 44, was held up a sign that read ” You run better than our government” to uplift every marathon runner passing by her on Sunset Park. Photo by Julie Liao

At 4th Avenue near Sunset Park in Brooklyn, Ellen McCann was hailing New York City Marathon runners with a smile and a sign that read, “You run better than our government.

Amused by McCann’s sign, a young runner shouted, “I do run better” as he gasped for breath.

“It’s just a joke about our government,” McCann said. “This means, ‘our government doesn’t run very well, but you do.’” she laughed. “While you’re running, you get very bored and the signs are funny and they make you laugh and they distract you.”

McCann was not alone. Standing beside her was her friend, Kimberly Gittines. They tracked down their friends and families on the phone who were running on the ready to cheer them on.

Around 11:00 a.m., McCann’s fiancé appeared in a group of runners. He dashed to her, kissed her hand, said,“ I love you”, and continued running.

McCann and her fiancé live in Virginia. Both of them are big fans of running.

“We work out about two hours a day, both of us together,” said McCann. “That’s how we spend time.”

Although she wanted to run in the marathon, she wasn’t chosen in the lottery.

“I like New York City,” she said. “It’s alive all day and all night. This isn’t the safest neighborhood , but it welcomes people. You don’t find that anywhere else. New York is awesome. I’ve always thought so.”

Last week, she ran the Marine Corps Marathon in Virginia with Gittines. They were next-door neighbors and knew each other for nearly three decades. The races are more like precious opportunities for them to spend time together.

“She lives in Virginia and I live in New Jersey and we don’t really get to catch up a lot,” said Gittines. “So it’s like catching up on the kids and work and our parents and all that stuff alike.”

When Gittines started to run marathons in 2011, her mother was severely ill because of cancer.

“I actually ran my first marathon two weeks before she passed away,” said Gittines. “I hadn’t trained. But I figured I’d go out and see how it was and I could push through the pain because I knew there was an end point. She didn’t have an end point and that’s what I thought when I ran. That helped me along in my run.”

After her mother died, she kept participating in marathons. Her memories with her mother always comes to her mind while she is running.

“I always think of her,” said Gittines. “When I grew up, we used to play golf with our families. And she was like, ‘here’s Kimberly! Putting for a birdie! It’s win! Yeah Kimberly!’ ”

Gittines said even though her mother had never watched her running marathons, she knew her mom would be supportive. “Whatever my brother and I did, she thought it was the best thing in the world.”

McCann’s niece, Regan Debennetto, 31, was also running in memory of her father, who died of a heart attack in 2002. After that, she began to run marathons. This time she ran for the American Heart Association and planned to raise money for them by finishing the whole course.