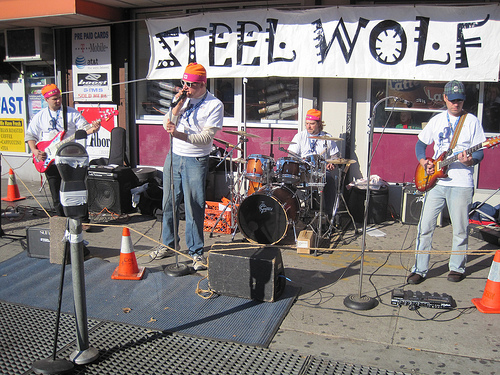 When Mark Adomaitis finished helping his band mates tune their instruments, he taped a small digital recorder to a parking meter in front of his microphone stand. He wanted history to capture every note of his band’s street-side performance.

Satisfied with his work, Adomaitis stepped to the microphone to address the crowd.

“Looks like all of New York has the runs this morning,” he cracked.

Adomaitis and the three other members of Steel Wolf, a self-proclaimed “loud rawk” band from Long Island, entertained New York City Marathon spectators in Park Slope, Brooklyn, near the Academy of Music with their crude and humorous blend of punk rock. The performance marked the fifth consecutive year that Steel Wolf had serenaded the marathon crowds with tunes such as “Stinkfinger,” “Mercy Flush” and “Serving Beer to Miners” — a drinking song dedicated to the rescued Chileans.

“We get some people with their hands over their ears,” Adomaitis chuckled. “The other reaction we get is the thumbs up, so we get the whole spectrum.”

Adomaitis, 43, of Floral Park, Long Island, founded Steel Wolf in 1982 and is the only current member of the band’s original lineup. He submitted a demo tape to an entertainment company responsible for booking the marathon’s musical acts five years ago, and Steel Wolf has been a fixture at the corner of Fourth Avenue and Atlantic Avenue ever since.

“This is one of the coveted spots,” he said of the block along the race’s eighth mile, surveying the crowd in front of Atlantic Terminal from behind his white-rimmed plastic sunglasses. “It’s almost like the Times Square of Brooklyn.”

The foursome recently recorded its third album, “Embracing Mainstream Success,” and handed out copies to the race’s cheering spectators. Steel Wolf plays at the marathon every year, but Adomaitis and company aren’t runners themselves.

Still, they sympathize with the athletes.

“I feel like I ran 10 miles,” Kezys groaned after the band finished its set. “My arms are killing me.”

During their five years of performing for the marathon’s crowd, Steel Wolf has endured the aches and pains of performance as well as last year’s rain to bring positive energy to an event that is unique to the city.

“It’s such a New York event,” Adomaitis said. “It’s a world event, but it’s so New York. We love that Steel Wolf is a part of it every year.”

Enjoyed your article. I wish I had been there with you. I enjoyed it the year that I came. It was everything that you say in your article.