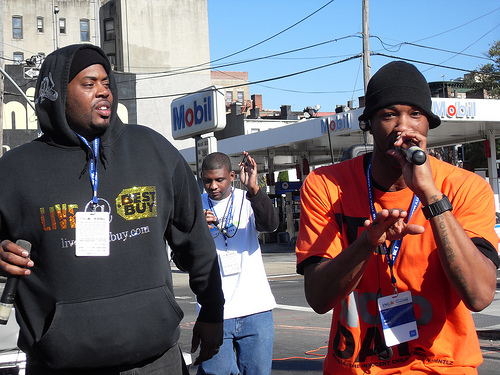 (From left) LaRue Marlow, Isaiah Seward and Andre Rainey of the BURN U Movement welcome runners to the Bronx with hip-hop beats. Photo by Alexa Mae Asperin

Upon crossing Willis Avenue Bridge, runners in the 2011 ING New York City Marathon celebrated their 20-mile victory by waving to the crowds, putting their hands in the air, and bobbing their heads to the swift sounds of hip-hop music that infiltrated the air as they invaded the Bronx.

“They’re running straight into the place where hip-hop was made,” said spectator Annie Ruiz-Martinez, 26, from Pelham Bay, Bronx. “It’s great that they’re being welcomed to the borough with this upbeat music to keep them going!”

Widely recognized as the birthplace of the hip-hop subculture, the Bronx welcomed thousands of runners from all over the world and attracted even more cheering fans hoping to give marathoners a boost on the 26.2 mile-long journey. Some passed out water bottles, others yelled tidbits of inspiration, and many extended their arms for a friendly high-five. But the BURN U Movement gave runners a taste of entertainment native to the borough they had finally reached.

“We’re getting such a positive response from the runners and the crowds,” said founder LaRue Marlow, 37, of Co-op City, Bronx. “We want to bring excitement to the runners and as soon as they pass that bridge, they hear us and get inspired to keep moving.”

Marlow, who came to the marathon with six other Movement members and has been involved in the music industry for the past 20 years, said the group’s mission to “bring unity through hip-hop culture” brought them to perform at the marathon for the first time, engaging crowds and runners with everything from rap and gospel to R&B.

“Why not encourage runners with upbeat music at a time where they’re probably needing it most,” Marlow said.

Rapper Isaiah “Saiah” Seward, 29, of Albany, NY, who performs both as a solo artist and with the Movement, was inspired to organize the group’s involvement with the marathon because of his passion of giving back to the community.

“I would never be able to get through this race,” Seward said. “So the Movement and I get to keep them going through music and remind them they can reach their goals.”

Seward, who has been performing for nearly 10 years, said entertaining runners in the Bronx was the perfect place not only because of its reputation as the hip-hop motherland, but because the location is a fundamental point for marathoners.

“At the 20-mile mark they’re probably reaching that point where they’re getting tired but people here are yelling, ‘Welcome to the Bronx!’ and we’re engaging the crowds,” Seward said. “We just want to give the runners energy and inspiration to get to the end.” 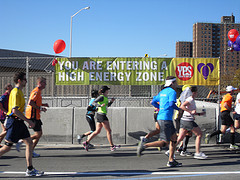 Runners are welcomed to the Bronx with signs like these and cheering crowds to boost their spirits during the ING NYC Marathon. Photo by Alexa Mae Asperin

As for involvement in future races, both Marlow and Seward agreed they would love to be part of the marathon – not by running but performing again.

“Next year I’m going to try and get a stage down here,” Marlow said. “It has been an amazing first experience and we hope we accomplished something today by showing others that there’s more to hip-hop than what you may see or hear.”

Spectator Cherise Gonzalez, 35, of Melrose, Bronx said the Movement’s beats helped her continue cheering, which she said may not be as strenuous as running, but requires just as much energy.

“It’s uplifting and helps me to help runners,” Gonzalez said. “They really get a sense of not only the Bronx but New York as a whole in that we welcome people from all over and take care of each other especially on days like today.”

Thanks Alexa! I just found this article today. I’m glad I’ll be getting to perform at the NYC Marathon again this year!