NYC Marathon: Samurai at the start of the race 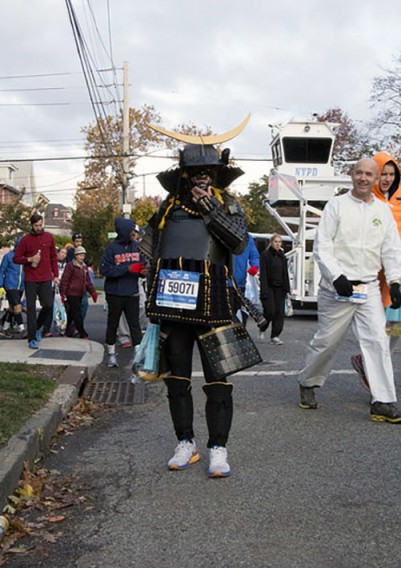 Gusty freezing winds greeted runners as they got off the Staten Island Ferry to run the 2014 TCS New York City Marathon this morning. One by one, as they exited the ferry terminal, sleepy participants hurried to get to the warm buses, almost competing with each other for a cozy bus seat.

The 26.2-mile course challenged 40,000 runners from all over the world. It started on the Verrazano Bridge in Staten Island, covered all five New York boroughs and ended in Central Park.

Aoiko Moisu, from Tokyo, Japan, participated in the marathon for the second time, proudly wearing traditional samurai attire. While his outfit may look odd, for Moisu, wearing samurai gear during the marathon is a way to introduce Japanese culture to viewers and a way for him to have fun.

“When I’m in the middle of the race, dehydrated and tired, hearing people cheer for me, like ‘Go, samurai, you can do it’, gives me energy and motivation to finish the marathon,” he said.

Moisu, who didn’t want to give his age, but said he “felt 18”, started running marathons six years ago and wears this costume every time. . The attire is made of light plastic parts and stretchy fabric, which allows Moisu to run fast, without restricting his movements.

“The plastic parts, arms, boots and chest, always remain the same,” said Moisu. “But I change fabric. When it’s hot, I use light material, when it’s cold, like today, I have heat-technology fabric underneath.”

In addition to running a tough marathon, Moisu has the added difficulty of getting the medal over his helmet.

“After I the cross finish line. organizers always find it hard to put the medal on me because of my helmet,” he said. “They end up putting it on my helmet’s horns.”

As Moisu waited to board the bus to the start line, the yellow and blue tussles of his costume were dancing in the wind, attracting not only the runners’ attention but also the police officers’. They searched him three times before allowing Moisu to board the bus.

“It’s cold outside and they made me take off my costume, leaving me in my shirt and pants,” said Moisu. “But I’m not mad at them. Police does this kind of thorough search for our own safety. We all remember the Boston Marathon.”

Moisu clipped his mask to the sides of the helmet and jogged slightly closer to the start line, occasionally stopping to shake hands or to take pictures with other runners.