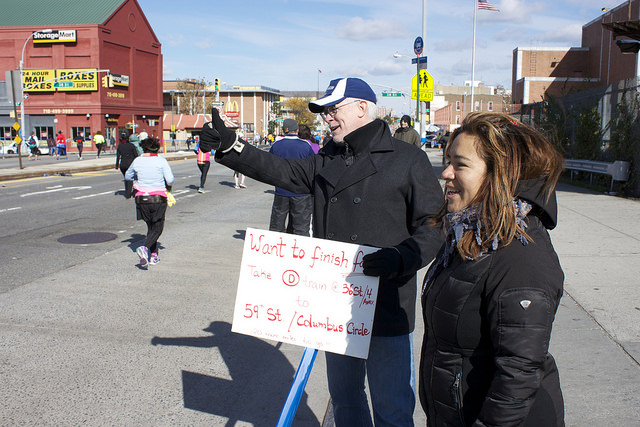 A sense of humor can come in handy when running the 26.2 mile TCS 2014 New York City Marathon course.

Standing on the corner of 39th Street and 4th Avenue, in Sunset Park, Brooklyn this morning, Patrick Hays’s goal is to help runners keep a smile. He held a sign that read in bright red letters “Want to finish fast?” Below it were simple to follow subway instructions on how to take the train from 36th Street to Columbus Circle. He explained this would deliver you a short jog from the marathon finish line.

“It’s not sanctioned, it’s just a suggestion,” said Hays of Bensonhurst, Brooklyn laughing. “There’s a question mark at the end.”

Runners are taking notice of his clever suggestion, and Hays is getting a number of smiles, out of breath laughs and high fives.

“I know they appreciate it,” said Hays of his sign.

Hays knows because in 2010 he completed his first New York City Marathon. Today he is standing on the same corner his family occupied to cheer him on four years ago. Every year since then he and his wife now return to encourage runners. According to Hays, there is a very simple reason for camping out just before mile six.

“Because the runners are happy here,” said Hays, 52. “You don’t feel the discomfort in your feet and knees. You’re just happy.”

In his personal marathon experience, training was the hardest part. Race day was all about having fun, and the crowds were what made the experience complete for him.

“Brooklyn was the best part,” said Hays. “People are just yelling “Yeah”! It carries you all the way through. I don’t even remember running.”

Just then, Hays paused to yell at a male runner wearing a Scotland sweatshirt and kilt. As a sidewalk spectator, seeing people represent their different cultural backgrounds and countries is his favorite part.

“We try to learn to say good luck in a couple different languages,” said Hays. “Then you get to yell at all kinds people, which is the best part.”

Hays and his wife are not alone cheering on the runners who still have 20 more miles ahead. The street is crowded with sidewalk bands, people hanging out of apartment buildings waving flags, and a nearby church holds a cookout. For Hays there is something very unique about the marathon, and one thing in particular stands out in his mind.

Hays, who trained for the cancelled 2012 marathon due to Hurricane Sandy, said he feels a little bit of that runner’s insanity beginning to creep back in.

“I was just telling my wife I want to do it again,” said Hays. “Every time I come out I get the energy.”

But it will not take him long to figure out if the excitement will last and he is truly committed to racing in 2015.

“If in two weeks from now I’m still sitting at the kitchen table stuffing my face then it’s not happening.”