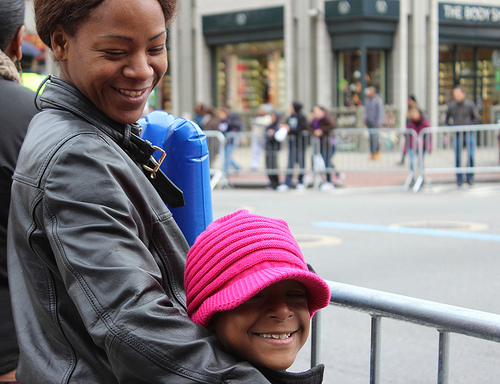 Fidellity Williams, 6 waited for her favorite teacher Ms. Sweany to run past her today at the ING New York City Marathon on 125th and 5th avenue.

“Everyday after school, she runs a lot of blocks,” said Williams.

Sweany ran to raise money for the Success Academy Harlem Charter School 5, where she is a first grade teacher.
The school is located on 140th street and Fredrick Douglas Boulevard, and shares a building with PS 123, where Shirley Robinson, 33 said her daughter is learning a lot, and has even moved up a reading level.

“I’m emotional, they love my child, and I love them for that,” Robinson said.

It was the first year the mother and daughter attended the marathon, but Robinson thought that this year it was especially important.

“It’s a family thing, I had to bring my daughter to support her teacher,” she said.

Robinson said she’s really proud of the example that Ms. Sweany is setting, and that it’s even inspired her daughter to want to run in the marathon when she grows up.

“It’s inspiring to know that people are running far and long and it’s really amazing, I’m just happy to be able to support them,” she said.

A block away, on 124th and 5th avenue, Yvonne Robinson Viaer, 54 handed out paper towels, and encouragement to participants. A marathon runner, Viaer said she stands in the same spot every year she isn’t running. 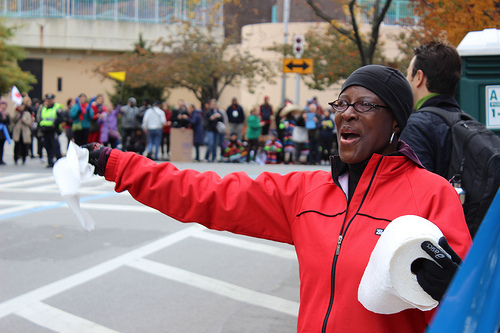 Yvonne Robinson Vaier, handed out paper towels and cheers to runners in West Harlem, Vaier usually runs the marathon herself, but decided to volunteer due to a knee injury. Photo by Alexandra Palmer

Viaer usually runs the marathon, but couldn’t this year due to a knee injury so she chose to volunteer because a lot of her friends were running. 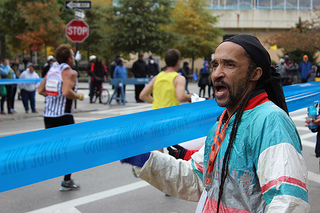 Keith Williams, 59 of West Harlem encouraged runners with cheers and ringing a bell for each one that passed by. Photo by Alexandra Palmer

“It just feels good that we could do it this year, and be out here and support everyone,” Viaer said.
Last year’s marathon was cancelled due to Hurricane Sandy’s disastrous effects on the city and its’ residents.
Keith Williams, 59 joined Viaer in celebrating the return of the marathon.

“I come out every year, I love the marathon,” Williams said.

Williams excitedly rang a bell for each runner that passed.

“Somebody cheering on the side can give you the strength to keep going,” he said.

Williams like Viaer, runs marathons too. He said he does it to celebrate health and life. In light of the recent Boston marathon bombing, Williams said, “I bet the people who did that never ran a marathon, because you cannot do that to humanity once you really celebrated life.”