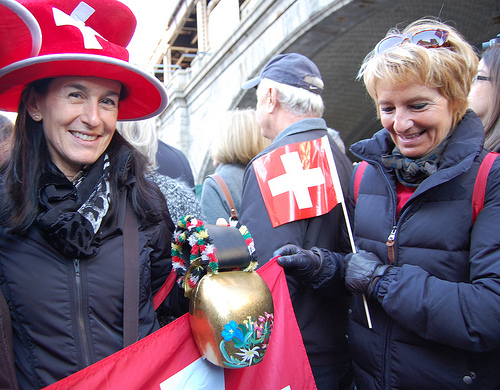 Rita Padua and Brigette Beerli, native Swiss women, were decked out in their country's flag so the runners they came to support would know where to find them. Photo by Kait Richmond.

In a sea of black and brown winter jackets, it was hard to stand out on 59th Street. and 1st Avenue, where spectators of the 2011 ING New York City Marathon waited for runners to exit the Queensboro Bridge and take their first steps into Manhattan. Amid the densely packed crowd was the red Swiss flag, emblazoned on shirts, hats and backpacks, in hopes of catching the eyes of the Swiss athletes who would run by.

“Today is a great day for my friend, and I’m excited for him,” said Brigette Beerli, who came from Switzerland with her friend Martin so he could run in the race, and she could cheer him on.

Beerli came to New York City with a travel agency in Switzerland that organizes an annual trip to the city for the marathon.

Esther Roth, a tour guide who lives in Astoria, Queens but is from Switzerland, said the company runs trips to many of the world’s biggest marathons, but New York is a popular destination.

“Some clients come almost every year, for many years, and everybody tells me that basically New York is the greatest experience of all the marathons,” said Roth.

Crowds swell at the Queensboro Bridge where NYC Marathon runners will take their first steps into Manhattan. Photo by Kait Richmond.

She said that their group numbered almost 200 people, and that the Swiss clients enjoy New York because of the diversity of people participating and cheering.

The Swiss spirit could be seen throughout the crowd that surrounded the bridge, a Swiss flag popping up here and a red shirt showing up there. The Manhattan side of the Queensboro Bridge is the 16-mile mark, and one of the most popular cheering zones along the 26.2-mile route.

Roth said she’s picked this spot for many years, because she thinks the runners must feel excited to run out from under the bridge and into a crowd of cheering fans.

“Our Swiss participants know that we are in this corner, so they will look for us here,” said Rita Padua, who was with Roth’s tour group.

Originally from Switzerland, but currently living in Washington D.C., Padua said her sister chose to run in this marathon so that Padua would not have to travel so far to see her compete.

The crowd erupted with cheers and blow horns when the professional women runners went by. Padua, who wore an oversized top hat with the Swiss flag on it, shook the cowbell she decorated and cheered loudly.

It’s Padua’s first time at the marathon, and while she waited to catch a glimpse of her sister come off the bridge, she enjoyed the electric atmosphere.

“It’s wonderful,” she said. “The weather helps a lot. I find it is very important for all the participants, and we also try to cheer everybody up.”