NYC Marathon: The Bellos of Caracas at Sunset Park 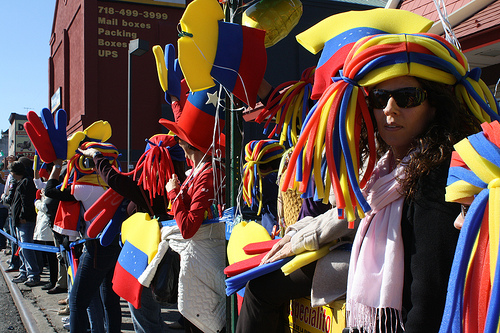 The Bello family has been flying in from Caracas for nine years for the New York City Marathon. They set up an elaborate camp flying the Venezuelan flag and cheering on their friends and relations at two points along the 26 mile route. Photo by Edna Ishayik

At 7 a.m., Gustavo Bello and a cluster of his friends and family set up banners, donned foamy red, yellow and blue hats and smeared their faces with paint.

They were preparing for an hours-long celebration of their team of more than 25 Venezuelan runners in the 2011 New York City Marathon. Brothers, sisters, husbands and wives were there to make some noise as their relations undertook a massive feat of physical endurance.

For the ninth consecutive year, the crew has parachuted in from Caracas to be part one of New York’s biggest sporting spectacles.

“It’s become a tradition,more and more runners have been joining us for this, some [have been participating] for 10 years some for the first time,” said Bello, a surgeon.

Every year, the Bellos and their extended family station themselves near the corner of Fourth Avenue and 37th Street in Sunset Park. This stretch of the course is lined with spartan bodegas, laundry services and fast food joints. It’s only several miles from the glitzy strip of Fifth Avenue marathoners will run later in the race, but in terms of socio-economics, it couldn’t be further.

“It’s easier. We’ve talked to the owner of the McDonalds. They let us park our cars,” said Adriana Vincentelli, one of the family members.

And it’s also easier to get a prime view. Unlike other neighborhoods further along the track, here the crowds are sparse.

The Bellos’ strategy, perfected over the years, allows no time for sampling the culture or cuisine of the taquerias and dumpling shops in the neighborhood. After the last runner in their group passes by, the plan calls for piling into rental cars and speeding up to the Upper East Side for a second round of cheering.

“The fifth mile is early enough that we get to see every runner—the slowest one and the fastest one,” Bello said. “It allows us then to go to the mile 18 and join them again. My dad is probably at the end. He’s 72.”

This year the group has a special motivation. Their long-time trainer, Marisela Diaz, was diagnosed with ovarian cancer and missed the race for the first time in six years. Usually she gets the team into shape over half a year and then jogs along with them on the big day.
Her absence is palpable. Her image looms large on a sign strung between two poles and several family members wear her name on their shirts.

“We are doing this for her,” said Vincentelli.

Team Bello did their best to make Diaz proud. One by one, or in small clumps, the runners dash by the family’s festive encampment. Some give a simple wave, others stop for photos, hugs and even some small energy snacks. The group is exuberant—beaming with pride at their clan-members effort.

When the race is over, the celebration continues at the Mariott Marquis in Times Square.

“It’s fun to hear every one of them,” Bellow said. “There’s always a story. People rushing to the restroom, shoes with holes in them, people with bad cramps. All kinds of stories.”

By 12:15 p.m., the sidewalks of Sunset Park were quickly emptying out. Flashing police cars crawl down the avenue, trailing some of the very last of the 47,000 marathoners. The Bellos were long gone before the patrol cars pass 37th Street—they’re already on their way to catch their top runners cruise past mile 18.