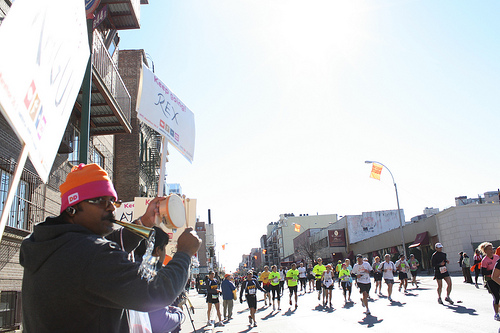 The sound of clapping and shouts of “Let’s go! Nice day for a run!” and “Good job!” disturbed the quiet neighborhood of Williamsburg, Brooklyn, as runners of the New York City Marathon tore through the Satmar Hassidic community on Sunday.

A few members of the Jewish community paused silently to watch the runners before going about their daily lives.

“We appreciate it, and we all work along with it,” said Leah Moskowitz, 33, as she calmly watched the race with her children from a bench in front of her house.

Leaving a carnage of cups behind them, racers pushed with ease past the 10-mile mark. It was the volunteers at the watering stations and bystanders from other neighborhoods who cheered the loudest.

Mohammed Khaled, 45, stood at the corner of Bedford and Flushing avenues, banged a tambourine and blew a party horn. He was joined by five friends, all managers or employees of Dunkin’ Donuts. They came together to support their franchise owners and a co-worker who were running in the race.

“We want to cheer them up as well as all the marathon racers,” Khaled said amidst the sound of horns. “We want to make sound and tell them to keep going.”

Khaled, a native of Bangladesh, is the general manager of the Dunkin’ Donuts on 66th Street and First Avenue in Manhattan.

He has cheered on marathon runners from the Dunkin’ Donuts team in front of his Manhattan store for the past 10 years. This year was the first time he witnessed the marathon in Brooklyn.

Fellow employees from 13 Dunkin’ Donuts in Manhattan, Brooklyn, and Queens were stationed at three locations — the 10-, 15- and 16 ½-mile markers — to provide moral support throughout the race, Khaled said.

“They want us to be fit all of the time,” Khaled said.

Khaled unzipped his jacket to proudly display the shirt he received during Saturday’s Continental Airlines International Friendship Run in Manhattan. All of the general managers and employees were encouraged to run in the 4-kilometer (2.48-mile) race, Khaled said.

“They motivate us,” he said.

What a great story. It’s wonderful to read something positive that happened in New York City, which oftentimes is overlooked. Kudos to the writer.