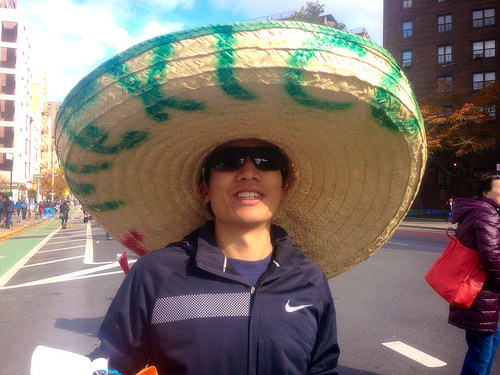 Justin Wood of Manhattan, wears his sombrero for the third year in a row during the TCS New York City Marathon on Sunday. Photo by Evgeniya Zolkina

Justin Wood knows that the best spot to cheer on 2014 TCS New York City Marathon is near mile 17 in Spanish Harlem.

“People still have energy, and they can still receive all of that support,” said Wood, 29, about today’s runners. The Manhattanite joined his friends at 103rd Street and First Avenue, donning a giant sombrero on his head.

A runner gave him the hat when the 2011 marathon was canceled in the aftermath of Hurricane Sandy. Now, Wood wears the sombrero every year.

“It’s a symbol of the triumph of people who’ve spirited bad situations,” he said. “It`s also very identifiable, so it`s a great thing to wear when I`m cheering on the race.”

Wood is a marathon runner himself. What started as a bucket list challenge became his passion for years. He completed eight marathons, each requiring three months of intense training and dieting. Today, Wood opted for the cheering line.

Cow bells and kazoos sounded around bright posters and costumed supporters who came to watch 40,000 people who signed up for 26.2 miles of leg work. 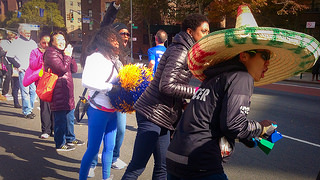 Justin Wood, of Manhattan and  spectators cheer on runners  in Spanish Harlem during the TCS New York City Marathon. Photo by Evgeniya Zolkina

Wood estimated that he knew around 50 people in the race. The NYU graduate student leads group runs in his spare time.

“I love marathon day, and I come out here and I cheer for hours and hours,” Wood said. “It’s just good to give people the support when they need it.”

While many spectators sipped on their morning coffee, Wood predicted the crowd’s energy would pick up later in the day.

“It will be madness, elation, celebration, just a full spectrum of motivating runners, and that’s what I love about marathon day,”he said. “The spirit of the city comes through.”